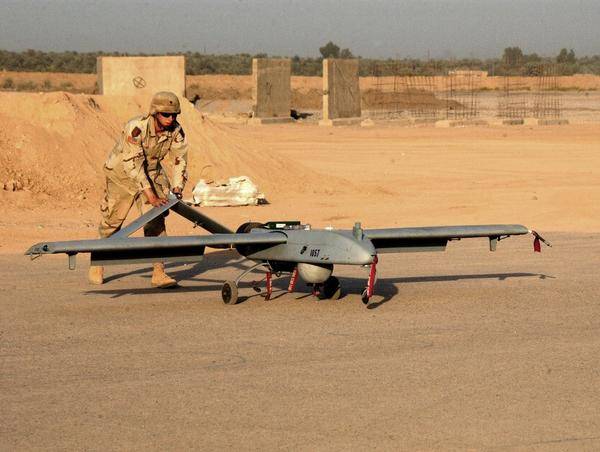 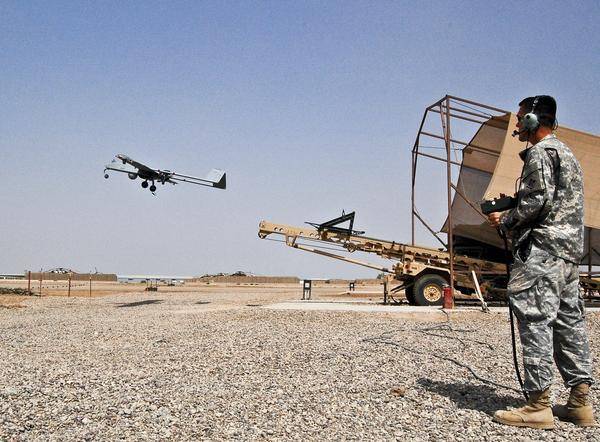 In the US, The Army's 2nd Battalion, 13th Aviation Regiment at Fort Huachuca, AZ, trains soldiers, Marines, and civilians in the operation and maintenance of the Shadow UAV. The training program is mainly undertaken by civilian instructors.

The RQ-7 Shadow 200 unmanned aerial vehicle is of a high-wing, constant chord pusher configuration with a twin-tailboom empennage and an inverted v-tail elerudder. The aircraft is powered by a 38 bhp (28 kW) AR741-1101 Wankel engine designed and manufactured by UAV Engines Ltd in the United Kingdom. Onboard electrical systems are powered by a GEC/Plessey 28 volt, direct current, 2,000 watt generator. Currently, the primary payload for the aircraft is the Israeli Aircraft Industries POP300 Plug-in Optical Payload which consists of a forward-looking Infrared camera, a daytime TV camera with a selectable near-infrared filter and a laser pointer. The aircraft has fixed tricycle landing gear. Takeoffs are assisted by a trailer-mounted pneumatic launcher which can accelerate the 375 pound aircraft to 70 knots (130 km/h) in 50 feet (15 m). Landings are guided by a Tactical Automatic Landing System developed by the Sierra Nevada Corporation which consists of a ground-based micro-millimeter wavelength radar and a transponder carried on the aircraft. Once on the ground, a tailhook mounted on the aircraft catches an arresting wire connected to two disk brake drums which can stop the aircraft in less than 170 feet (52 m).

The aircraft is part of a larger system which currently uses the M1152-series of Humvees for ground transport of all ground and air equipment. The system consists of four aircraft, three of which are transported in the Air Vehicle Transporter (AVT). The fourth is transported in a specially-designed storage container to be used as a spare. The AVT also tows the launcher. The AVT Support Vehicle and trailer contain extra equipment to launch and recover the aircraft, such as the Tactical Automatic Landing System. Maintenance equipment for the aircraft is stored in the Maintenance Section Multifunctional (MSM) vehicle and trailer as well as the M1165 MSM Support Vehicle and its associated trailer. The system also contains two HMMWV-mounted Ground Control Stations (GCS) which control the aircraft in flight. Each GCS has an associated Ground Data Terminal (GDT). The GDT takes commands generated by the GCS and modulates them into radio waves which are received by the aircraft in flight. The GDT also receives video imagery from the payload as well as telemetry from the aircraft and sends them to the GCS. Each GDT is stored for shipping on a trailer which also houses a 10 kW Tactical Quiet Generator which powers its associated GCS. Each trailer is towed by a M1165 GCS Support Vehicle. Each system also contains one Portable Ground Control Station (PGCS) and Portable Ground Data Terminal (PGDT). The PGCS and PGDT are stripped-down versions of the GCS and GDT and are designed to be used as a backup to the two GCSs.

A fielded Shadow 200 system requires 22 soldiers to operate it. Army modelling indicates that crew workload is highest at takeoff, and second-highest at landing.

Note: When outfitted with IE (Increased Endurance) Wings, the CRP (Communications Relay Package) and the 1102 engine, endurance time is increased to 9 hours, wing span is increased to approx. 22 feet (6.7 m), and the service ceiling is 18,000 ft (only with authorization).