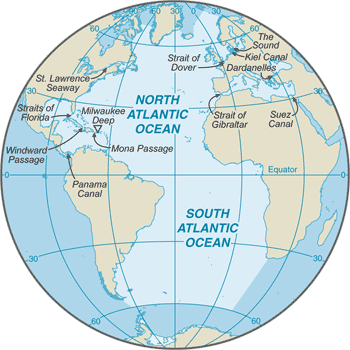 The Atlantic Ocean is the second largest of the world's five oceans (after the Pacific Ocean, but larger than the Indian Ocean, Southern Ocean, and Arctic Ocean). The Kiel Canal (Germany), Oresund (Denmark-Sweden), Bosporus (Turkey), Strait of Gibraltar (Morocco-Spain), and the Saint Lawrence Seaway (Canada-US) are important strategic access waterways. The decision by the International Hydrographic Organization in the spring of 2000 to delimit a fifth world ocean, the Southern Ocean, removed the portion of the Atlantic Ocean south of 60 degrees south latitude.

body of water between Africa, Europe, the Arctic Ocean, the Americas, and the Southern Ocean

Political Map of the World

slightly less than 6.5 times the size of the US

tropical cyclones (hurricanes) develop off the coast of Africa near Cape Verde and move westward into the Caribbean Sea; hurricanes can occur from May to December but are most frequent from August to November

surface usually covered with sea ice in Labrador Sea, Denmark Strait, and coastal portions of the Baltic Sea from October to June; clockwise warm-water gyre (broad, circular system of currents) in the northern Atlantic, counterclockwise warm-water gyre in the southern Atlantic; the ocean floor is dominated by the Mid-Atlantic Ridge, a rugged north-south centerline for the entire Atlantic basin

icebergs common in Davis Strait, Denmark Strait, and the northwestern Atlantic Ocean from February to August and have been spotted as far south as Bermuda and the Madeira Islands; ships subject to superstructure icing in extreme northern Atlantic from October to May; persistent fog can be a maritime hazard from May to September; hurricanes (May to December)

The Atlantic Ocean provides some of the world's most heavily trafficked sea routes, between and within the Eastern and Western Hemispheres. Other economic activity includes the exploitation of natural resources, e.g., fishing, dredging of aragonite sands (The Bahamas), and production of crude oil and natural gas (Caribbean Sea, Gulf of Mexico, and North Sea).

Kiel Canal and Saint Lawrence Seaway are two important waterways; significant domestic commercial and recreational use of Intracoastal Waterway on central and south Atlantic seaboard and Gulf of Mexico coast of US; the International Maritime Bureau reports the territorial waters of littoral states and offshore Atlantic waters as high risk for piracy and armed robbery against ships, particularly in the Gulf of Guinea off West Africa; in 2012, 58 commercial vessels were attacked in the Gulf of Guinea with 10 hijacked and 207 crew members taken hostage; hijacked vessels are often disguised and cargoes stolen; crews have been robbed and stores or cargoes stolen