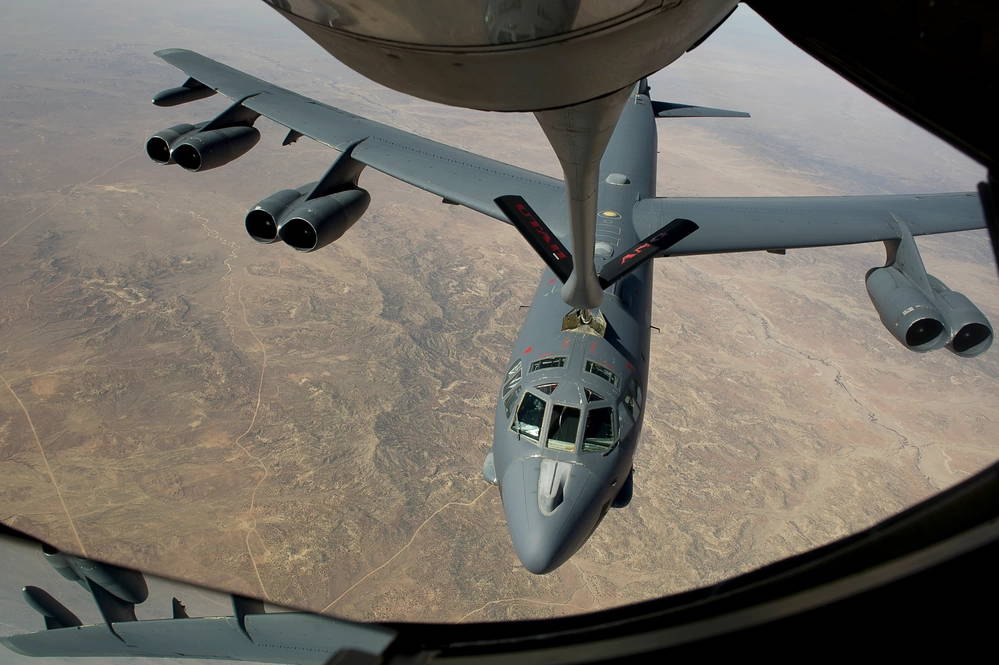 The Boeing B-52 Stratofortress is a long-range, subsonic, jet-powered strategic bomber. The B-52 was designed and built by Boeing, which has continued to provide support and upgrades. It has been operated by the United States Air Force (USAF) since the 1950s. The bomber carries up to 70,000 pounds (32,000 kg) of weapons.

Beginning with the successful contract bid in June 1946, the B-52 design evolved from a straight-wing aircraft powered by six turboprop engines to the final prototype YB-52 with eight turbojet engines and swept wings. The B-52 took its maiden flight in April 1952. Built to carry nuclear weapons for Cold War-era deterrence missions, the B-52 Stratofortress replaced the Convair B-36. Although a veteran of several wars, the B-52 has dropped only conventional munitions in combat. The B-52's official name Stratofortress has been used rarely in informal circumstances; it has become common to refer to the aircraft as the BUFF (Big Ugly Fat Fucker).

The B-52 has been in active service with the USAF since 1955. As of 2012, 85 remain on active duty with nine in reserve. The bombers flew under the Strategic Air Command (SAC) until it was inactivated in 1992 and its aircraft absorbed into the Air Combat Command(ACC); in 2010 all B-52 Stratofortresses were transferred from the ACC to the new Air Force Global Strike Command (AFGSC). Superior performance at high subsonic speeds and relatively low operating costs have kept the B-52 in service despite the advent of later aircraft, including the canceled Mach 3 North American XB-70 Valkyrie, the variable-geometry Rockwell B-1B Lancer, and the stealth Northrop Grumman B-2 Spirit. The B-52 marked its 50th anniversary of continuous service with its original operator in 2005 and after being upgraded between 2013 and 2015 it will serve into the 2040s.

The B-52 shared many technological similarities with the preceding Boeing B-47 Stratojet strategic bomber. The two aircraft utilized the same basic design, such as swept wings and podded jet engines, and the cabin included the crew ejection systems. On the B-52D, the pilots and electronic countermeasures (EDM) operator ejected upwards, while the lower deck crew ejected downwards; until the B-52G, the gunner had to jettison the tail gun and bail out.

B-52H (61-0023), configured at the time as a testbed to investigate structural failures, still flying after its vertical stabilizer sheared off in severe turbulence on 10 January 1964. The aircraft landed safely

Structural fatigue was accelerated by at least a factor of eight in a low-altitude flight profile over that of high-altitude flying, requiring costly repairs to extend service life. In the early 1960s, the three-phase High Stress program was launched to counter structural fatigue, enrolling aircraft at 2,000 flying hours. Follow-up programs were conducted, such as a 2,000-hour service life extension to select airframes in 1966–1968, and the extensive Pacer Plank reskinning, completed in 1977. The wet wing introduced on G and H models was even more susceptible to fatigue, experiencing 60% more stress during flight than the old wing. The wings were modified by 1964 under ECP 1050. This was followed by a fuselage skin and longeron replacement (ECP 1185) in 1966, and the B-52 Stability Augmentation and Flight Control program (ECP 1195) in 1967. Fuel leaks due to deteriorating Marman clamps continued to plague all variants of the B-52. To this end, the aircraft were subjected to Blue Band (1957), Hard Shell(1958), and finally QuickClip (1958) programs. The latter fitted safety straps which prevented catastrophic loss of fuel in case of clamp failure.

In September 2006, the B-52 became one of the first US military aircraft to fly using alternative fuel. It took off from Edwards Air Force Base with a 50/50 blend of Fischer-Tropsch process (FT) synthetic fuel and conventional JP-8 jet fuel which was burned in two of the eight engines. On 15 December 2006, a B-52 took off from Edwards with the synthetic fuel powering all eight engines, the first time an air force aircraft was entirely powered by the blend. The seven-hour flight was considered a success. This program is part of the Department of Defense Assured Fuel Initiative, which aims to reduce crude oil usage and obtain half of its aviation fuel from alternative sources by 2016. On 8 August 2007, Air Force Secretary Michael Wynne certified the B-52H as fully approved to use the FT blend.

A view of the lower deck of the B-52, dubbed the battle station

Ongoing problems with avionics systems were addressed in the Jolly Well program, completed in 1964, which improved components of the AN/ASQ-38 bombing navigational computer and the terrain computer. The MADREC (Malfunction Detection and Recording) upgrade fitted to most aircraft by 1965 could detect failures in avionics and weapons computer systems, and was essential in monitoring the Hound Dog missiles. The electronic countermeasures capability of the B-52 was expanded with Rivet Rambler (1971) and Rivet Ace (1973).

To improve operations at low altitude, the AN/ASQ-151 Electro-Optical Viewing System (EVS), which consisted of a Low Light Level Television (LLLTV) and a Forward looking infrared (FLIR) system mounted in blisters under the noses of B-52Gs and Hs between 1972 and 1976. The navigational capabilities of the B-52 were later augmented with the addition of GPS in the 1980s. The IBM AP-101, also used on the Rockwell B-1 Lancer bomber and the Space Shuttle, was the B-52's main computer.

In 2007 the LITENING targeting pod was fitted, which increased the effectiveness of the aircraft in the attack of ground targets with a variety of standoff weapons, using laser guidance, a high-resolution forward-looking infrared sensor (FLIR), and a CCD camera used to obtain target imagery. LITENING pods have been fitted to a wide variety of other US aircraft, such as the McDonnell Douglas F/A-18 Hornet, the General Dynamics F-16 Fighting Falcon and the McDonnell Douglas AV-8B Harrier II.

The ability to carry up to 20 AGM-69 SRAM nuclear missiles was added to G and H models, starting in 1971. To further improve the B-52's offensive ability, air-launched cruise missiles (ALCMs) were fitted. After testing of both the air force-backed Boeing AGM-86 and the navy-backed General Dynamics AGM-109 Tomahawk, the AGM-86B was selected for operation by the B-52 (and ultimately by the B-1 Lancer). A total of 194 B-52Gs and Hs were modified to carry AGM-86s, carrying 12 missiles on underwing pylons, with 82 B-52Hs further modified to carry another eight missiles on a rotary launcher fitted in the aircraft's bomb-bay. To conform with the requirements of the SALT II Treaty for cruise missile capable aircraft to be readily identified by reconnaissance satellites, the cruise missile armed B-52Gs were modified with a distinctive wing root fairing. As all B-52Hs were assumed to be modified, no visual modification of these aircraft was required. In 1990, the stealthy AGM-129 ACM cruise missile entered service; although intended to replace the AGM-86, a high cost and the Cold War's end led to only 450 being produced; unlike the AGM-86, no conventional (non-nuclear) version was built. The B-52 was to have been modified to utilize Northrop Grumman's AGM-137 TSSAM weapon; however, the missile was canceled due to development costs.

A B-52D with anti-flash white on the under side.

Those B-52Gs not converted as cruise missile carriers were subject to a series of modifications to improve their conventional bombing, being fitted with a new Integrated Conventional Stores Management System (ICSMS) and new underwing pylons which were able to be fitted with larger bombs or other stores than could be carried on the external pylons. Thirty B-52s were further modified to carry up to 12 AGM-84 Harpoon anti-ship missiles each, while 12 B-52Gs were fitted to carry the AGM-142 Have Nap stand-off air-to-ground missile. When the B-52G was retired in 1994, an urgent scheme was launched to restore an interim Harpoon and Have Nap capability, the four aircraft being modified to carry Harpoon and four to carry Have Nap under the Rapid Eight program.

The Conventional Enhancement Modification (CEM) program gave the B-52H a more comprehensive conventional weapons capability, adding the modified underwing weapon pylons used by conventional-armed B-52Gs, Harpoon and Have Nap, and the capability to carry new-generation weapons including the Joint Direct Attack Munition and Wind Corrected Munitions Dispenser guided bombs, the AGM-154 glide bomb and the AGM-158 JASSM missile. The CEM program also introduced new radios, integrated Global Positioning System into the aircraft's navigation system and replaced the under-nose FLIR with a more modern unit. Forty-seven B-52Hs were modified under the CEM program by 1996, with 19 more by the end of 1999.

For a study for the U.S. Air Force in the mid-1970s, Boeing investigated replacing the engines, changing to a new wing, and other improvements to upgrade B-52G/H aircraft as an alternative to the B-1A, then in development. Boeing later suggested re-engining the B-52H fleet with the Rolls-Royce RB211 535E-4. This would involve replacing the eight Pratt & Whitney TF33s (total thrust 8 × 17,000 lb) with four RB211s (total thrust 4 × 37,400 lb); which would increase range and reduce fuel consumption, at a cost of approximately US$2.56 billion for the whole fleet (71 aircraft at $36 million each). A Government Accountability Office study concluded that Boeing's estimated savings of US$4.7 billion would not be realized and that it would cost US$1.3 billion over keeping the existing engines; citing significant up-front procurement and re-tooling expenditure, and the RB211's higher maintenance cost. The GAO report was subsequently disputed in a Defense Sciences Board report in 2003; the air force was urged to re-engine the aircraft without delay. Further, the DSB report stated the program would have significant savings, reduce greenhouse gas emissions, and increase aircraft range and endurance; in line with the conclusions of a separate Congress-funded study conducted in 2003. The re-engining has not been approved as of 2010.

Note: The original costs were in approximate 1955 United States dollars. Figures in tables noted with current have been adjusted for inflation.

Boeing B-52H static display with weapons, Barksdale AFB 2006. A second B-52H can be seen in flight in the background