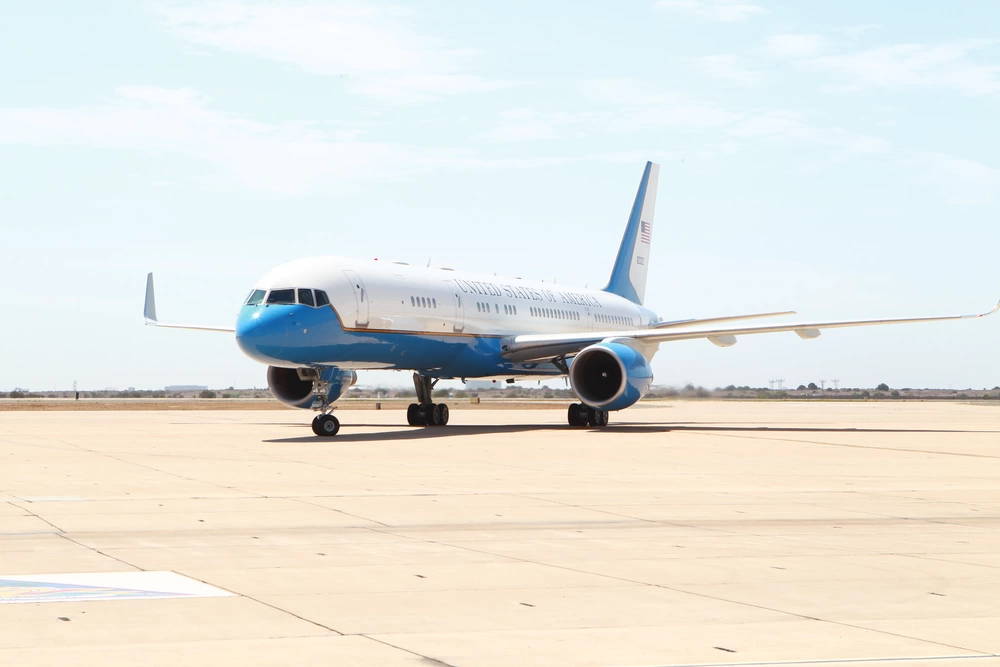 The Boeing C-32 is a military passenger transportation version of the Boeing 757 for the United States Air Force. The C-32 provides transportation for United States leaders to locations around the world. The primary customers are the Vice President of the United States, using the distinctive call sign "Air Force Two", the First Lady, and occasionally members of the U.S. Cabinet and U.S. Congress. Presidents Barack Obama, George W. Bush and Bill Clinton have at times flown on a C-32 as Air Force One in place of the larger VC-25A.

Secretary of Defense Robert Gates and former President George H. W. Bush aboard a C-32 in 2007

President Obama and staffers aboard a C-32A in 2009 showing the second and third section.

The C-32 is a specially configured version of the Boeing 757-200 airliner. The C-32 body is identical to that of the Boeing 757-200, but has different interior furnishings and more sophisticated avionics. For the C-32A, the passenger cabin is divided into four sections:

The C-32 is more fuel efficient and has improved capabilities over its VC-137 predecessor. It can travel twice the distance on the same amount of fuel and operate on shorter runways down to 5,000 feet (1,500 m) in length. Its 92,000 pound (41,700 kg) fuel capacity allows the aircraft to travel 5,500 nautical miles (10,000 km) unrefueled. In-flight refueling is via a receptacle on top of the forward fuselage, just aft of the cockpit.

Inside the C-32, communications are paramount. The Vice President, heads of state and other decision-makers can conduct business anywhere around the world using improved telephones, satellites, television monitors, facsimiles and copy machines. The C-32 has state-of-the-art avionics equipment.

The C-32 has better short-field capacity than the VC-25, making it preferable when flying to locations without a runway long enough to accommodate the VC-25.