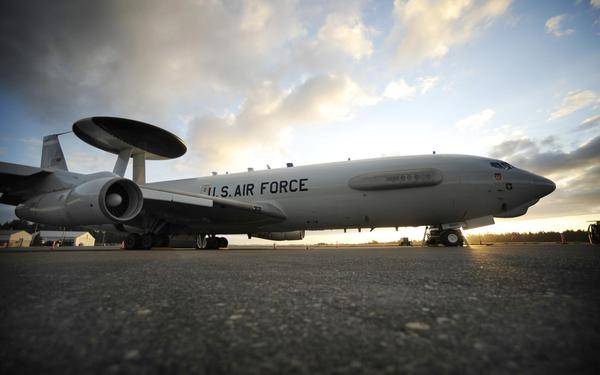 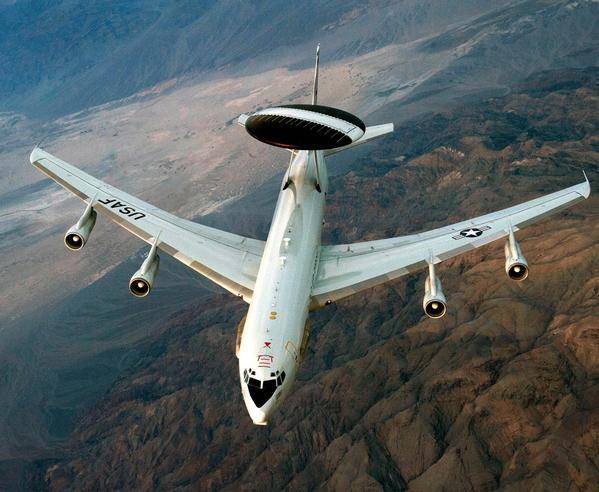 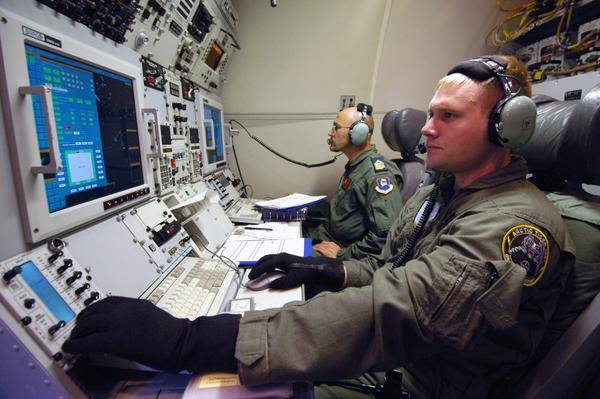 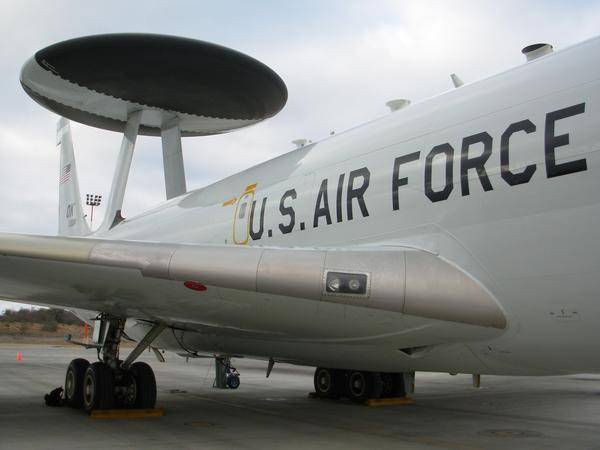 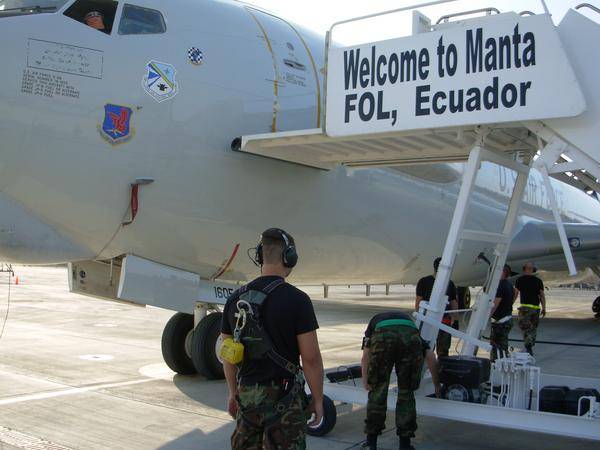 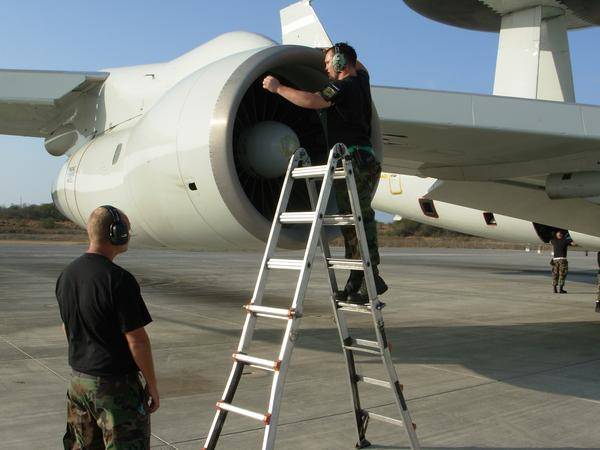 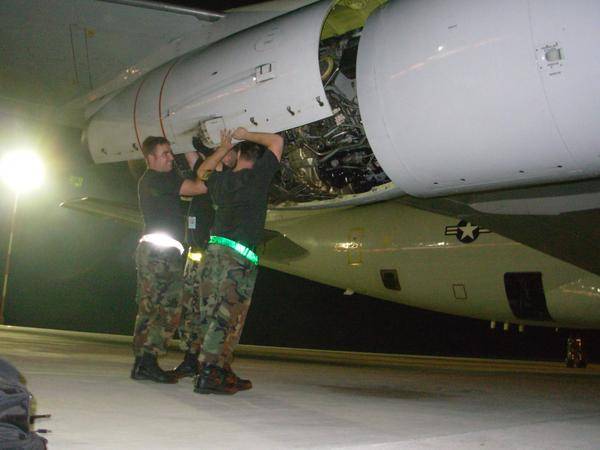 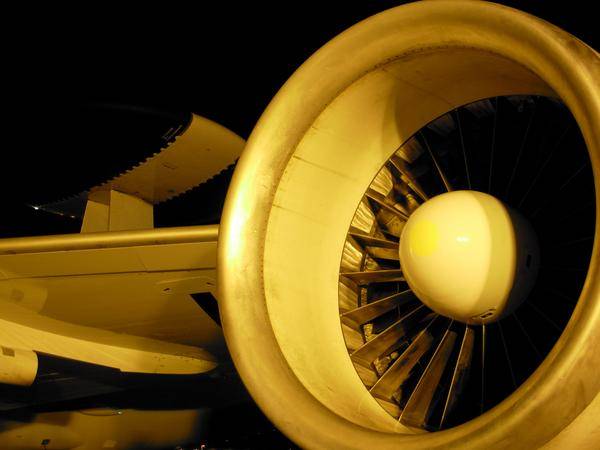 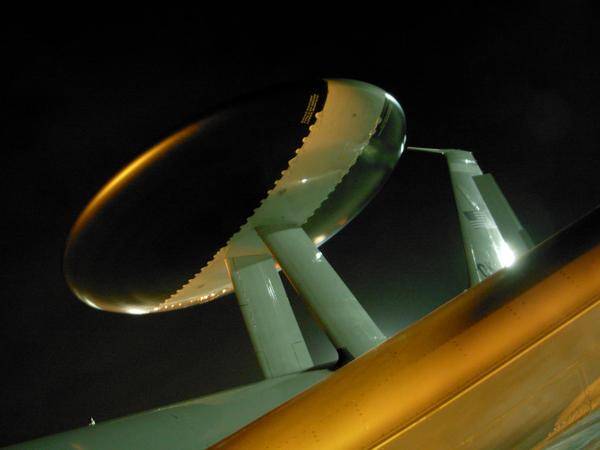 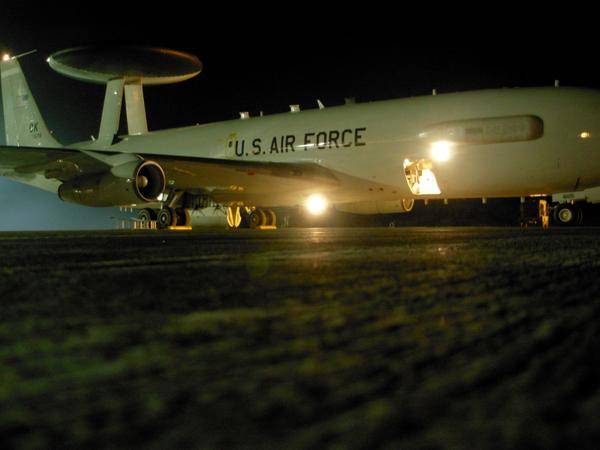 The Boeing E-3 Sentry is an airborne early warning and control (AWACS) developed by Boeing as the prime contractor. Derived from the Boeing 707, it provides all-weather surveillance, command, control and communications, and is used by the United States Air Force (USAF), NATO, Royal Air Force (RAF), French Air Force and Royal Saudi Air Force. The E-3 is distinguished by the distinctive rotating radar dome above the fuselage. Production ended in 1992 after 68 aircraft were built.

In the mid-1960s, the USAF was seeking an aircraft to replace its piston-engined EC-121, which had seen service for over a decade. After issuing preliminary development contracts to three companies, the USAF picked Boeing to construct two airframes to test Westinghouse Electric's and Hughes's competing radars. Both radars used Pulse-Doppler technology, with Westinghouse's design emerging as the contract winner. Testing on the first production E-3 began in October 1975.

The first USAF E-3 was delivered in March 1977, and during the next seven years, a total of 34 aircraft were manufactured. NATO, as a single identity, also had eighteen aircraft manufactured, basing them in Germany. The E-3 was also sold to the United Kingdom (seven) and France (four) and Saudi Arabia (five, plus eight E-3 derived tanker aircraft). In 1991, by which time the last aircraft had been delivered, E-3s participated in Operation Desert Storm, playing a crucial role of directing Coalition aircraft against the enemy. Throughout the aircraft's service life, numerous upgrades were performed to enhance its capabilities. In 1996, Westinghouse Electric was acquired by Northrop before being renamed Northrop Grumman Electronic Systems, which currently supports the E-3's radar.

The E-3 Sentry's airframe is a modified Boeing 707-320B Advanced model. USAF and NATO E-3s have an unrefueled range of some 4,000 mi (6,400 km) or eight hours of flying. The newer E-3 versions bought by France, Saudi Arabia and the UK are equipped with newer CFM56-2 turbofan engines, and these can fly for about 11 hours or about 5,000 mi (8,000 km). The Sentry's range and on-station time can be increased through air-to-air refueling and the crews can work in shifts by the use of an on-board crew rest and meals area.

When deployed, the E-3 monitors an assigned area of the battlefield and provides information for commanders of air operations to gain and maintain control of the battle; whilst as an air defense asset, E-3s can detect, identify and track airborne enemy forces far from the boundaries of the U.S. or NATO countries and can direct fighter-interceptor aircraft to these targets. In support of air-to-ground operations, the E-3 can provide direct information needed for interdiction, reconnaissance, airlift and close-air support for friendly ground forces.

The unpressurized dome is 30 feet (9.1 m) in diameter, six feet (1.8 m) thick at the center, and is held 11 feet (3.4 m) above the fuselage by two struts. It is tilted down 6° at the front to reduce its air drag during take-offs, and while flying endurance speed (which is corrected electronically by both the radar and SSR antenna phase shifters). The dome uses both bleed-air and cooling doors to remove the heat generated by electronic and mechanical equipment. The hydraulically rotated antenna system permits the Westinghouse Corporation's AN/APY-1 and AN/APY-2 passive electronically scanned array radar system to provide surveillance from the Earth's surface up into the stratosphere, over land or water. Close-up view of the radar, which revolves at 6 revolutions per minute.

Other major subsystems in the E-3 Sentry are navigation, communications, and computers. Consoles display computer-processed data in graphic and tabular format on video screens. Console operators perform surveillance, identification, weapons control, battle management and communications functions. The radar and computer subsystems on the E-3 can gather and present broad and detailed battlefield information. This includes position and tracking information on enemy aircraft and ships, and location and status of friendly aircraft and naval vessels. The information can be sent to major command and control centers in rear areas or aboard ships. In times of crisis, data can be forwarded to the National Command Authority in the U.S. via RC-135 or naval aircraft carrier task forces.

Electrical generators mounted on each of the E-3's four engines provide one megawatt of electrical power that is required by the E-3's radars and other electronics. Its pulse-Doppler radar has a range of more than 250 mi (400 km) for low-flying targets at its operating altitude, and the pulse "beyond the horizon" radar has a range of approximately 400 mi (650 km) for aircraft flying at medium to high altitudes. The radar combined with a secondary surveillance radar to provide a look down to detect, identify and track enemy and friendly low-flying aircraft while eliminating ground clutter returns.

Starting in 1987, USAF E-3s were upgraded under the "Block 30/35 Modification Program" to enhance the E-3's capabilities. On 30 October 2001, final air frame to be upgraded under this program was rolled out. Several major enhancements were made, firstly the installation of electronic support measures (ESM) and an electronic surveillance capability, for both active and passive means of detection. The Joint Tactical Information Distribution System (JTIDS) provides rapid and secure communication for transmitting information, including target positions and identification data, to other friendly platforms. Global Positioning System (GPS) capability was also added. On-board computers were also overhauled to accommodate JTIDS, Link-16, the new ESM systems and to provide for future enhancements.

The RAF had also joined the USAF in adding RSIP to upgrade the E-3's radars. The retrofitting of the E-3 squadrons were completed in December 2000. Along with the RSIP upgrade was installation of the Global Positioning System/Inertial Navigation Systems which dramatically improve positioning accuracy. In 2002, Boeing was awarded a contract to add RSIP to the small French AWACS squadron. Installation was completed in 2006.

NATO E-3s have the registration LX on the tail. The chin bulges house an ESM suite.

NATO
Based in Geilenkirchen, Germany, 18 E-3 AWACS were purchased – one lost in Greece. All of these aircraft are officially registered as aircraft of Luxembourg, a NATO member with no other air force. Responsible for monitoring airspace for NATO operations around the world.

France
The French Air Force purchased four E-3F aircraft similar to the British E-3D aircraft.
All planes are assigned to the Escadron de Détection et de Commandement Aéroporté (ECDA, Air detection and command squadron) and are based at Avord Air Base.

United Kingdom
The Royal Air Force purchased seven E-3Ds by October 1987 but six were operational as of 2012. The aircraft are designated Sentry AEW.1. The E-3 has been involved in three hull-loss accidents.