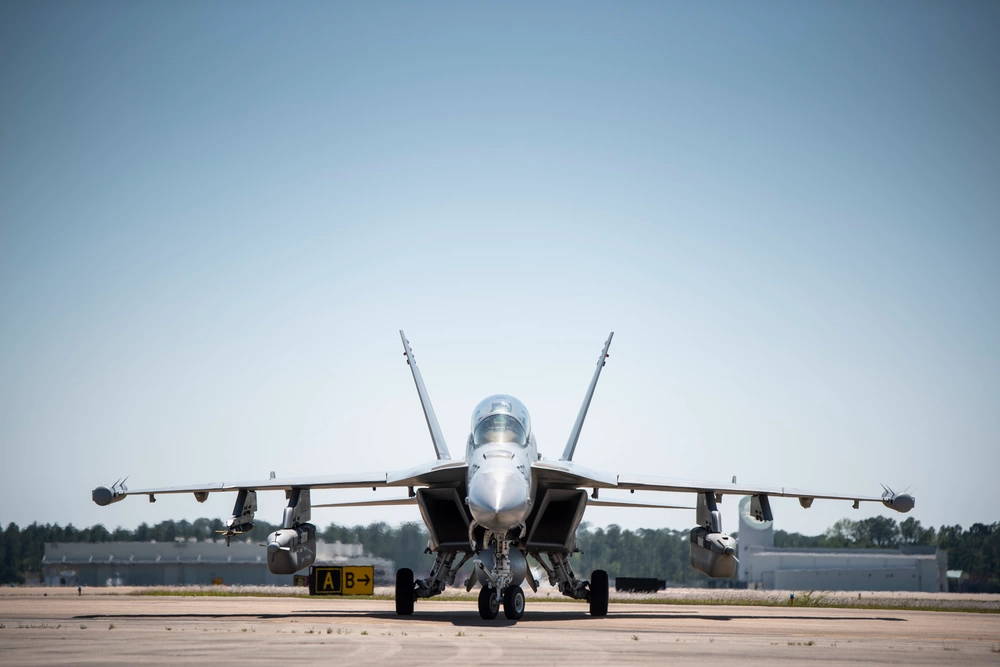 The Boeing EA-18G Growler is an American carrier-based electronic warfare aircraft, a specialized version of the two-seat F/A-18F Super Hornet. The EA-18G will replace the Northrop Grumman EA-6B Prowlers in service with the United States Navy. The Growler's electronic warfare capability is primarily provided by Northrop Grumman. The EA-18G began production in 2007 and entered operational service in late 2009.

An EA-18G Growler (BuNo 166856) of test and evaluation squadron VX-9 Vampires, carrying an array of payload, including external fuel tanks and missiles

The Growler's flight performance is similar to that of the F/A-18E/F. This attribute enables the Growler to perform escort jamming as well as the traditional standoff jamming mission. Growlers will be able to accompany F/A-18s during all phases of an attack mission. In order to give the Growler more stable flight for the electronic warfare mission, Boeing changed the leading edge fairings and wing fold hinge fairings, and added wing fences and aileron "tripper strips".

The Growler has more than 90% in common with the standard Super Hornet, sharing airframe, Raytheon AN/APG-79 AESA radar and weapon systems such as the AN/AYK-22 stores management system. Most of the dedicated airborne electronic attack equipment is mounted in the space that used to house the internal 20 mm cannon and on the wingtips. Nine weapons stations remain free to provide for additional weapons or jamming pods. The added electronics include AN/ALQ-218 wideband receivers on the wingtips, and ALQ-99 high and low-band tactical jamming pods. The ALQ-218 combined with the ALQ-99 form a full spectrum electronic warfare suite that is able to provide detection and jamming against all known surface-to-air threats. However the current pods will be inadequate against emerging threats.

The poor reliability of the ALQ-99 jammer pod and frequent failures of the Built In Test (BIT) have caused crew to fly missions with undetected faults. The ALQ-99 has also interfered with the aircraft's AESA radar, and has imposed a high workload on the two-man crew, along with reducing the Growler's top speed.

Boeing is looking into other potential upgrades; the ALQ-99 radar jamming pod may be replaced in the future, and the company is looking into adding weapons and replacing the satellite communications receiver. The Growler is the initial platform for the Next Generation Jammer (NGJ) which uses Active Electronically Scanned Array (AESA) technology to focus jamming power exactly where needed. The NGJ was to be implemented on the F-35. However, in May 2012, the U.S. Navy decided to focus NGJ integration on the EA-18G for an expected in-service date of 2020, and defer work for the F-35. Boeing is also looking at exporting a Growler Lite configuration without the jamming pods for electronic awareness rather than electronic attack.