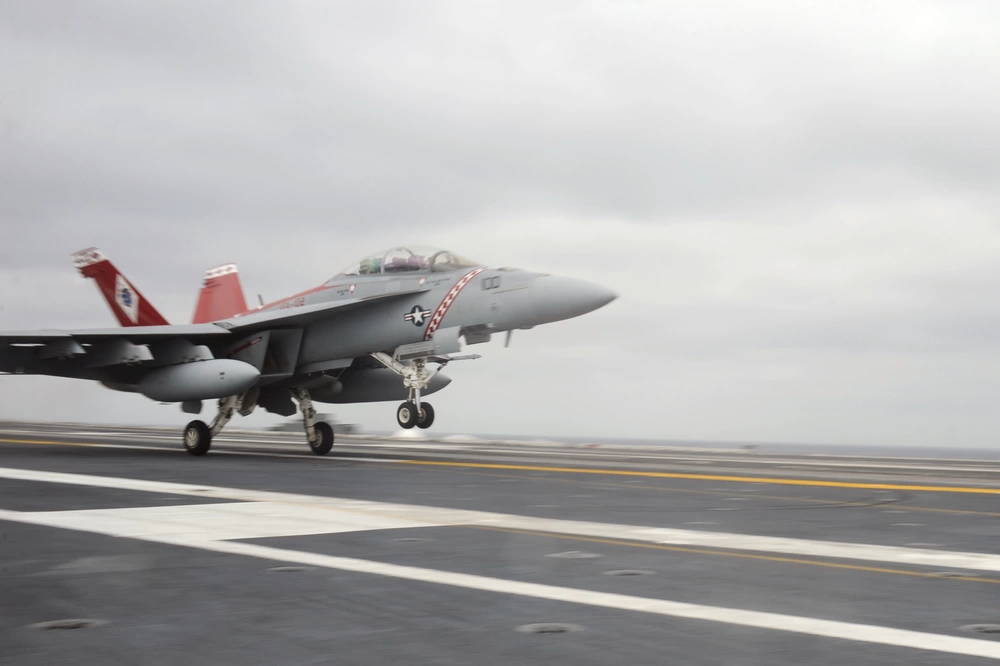 The Boeing F/A-18E/F Super Hornet is a twin-engine carrier-based multirole fighter aircraft variant based on the McDonnell Douglas F/A-18 Hornet. The F/A-18E single-seat and F/A-18F tandem-seat variants are larger and more advanced derivatives of the F/A-18C and D Hornet. The Super Hornet has an internal 20 mm gun and can carry air-to-air missiles and air-to-surface weapons. Additional fuel can be carried in up to five external fuel tanks and the aircraft can be configured as an airborne tanker by adding an external air refueling system.

Designed and initially produced by McDonnell Douglas, the Super Hornet first flew in 1995. Full-rate production began in September 1997, after the merger of McDonnell Douglas and Boeing the previous month. The Super Hornet entered service with the United States Navy in 1999, replacing the Grumman F-14 Tomcat, which was retired in 2006, and serves alongside the original Hornet. The Royal Australian Air Force (RAAF), which has operated the F/A-18A as its main fighter since 1984, ordered the F/A-18F in 2007 to replace its aging F-111 fleet. RAAF Super Hornets entered service in December 2010.

The Super Hornet is largely a new aircraft. It is about 20 percent larger, 7,000 lb (3,200 kg) heavier at empty weight, and 15,000 lb (6,800 kg) heavier at maximum weight than the original Hornet. The Super Hornet carries 33 percent more internal fuel, increasing mission range by 41 percent and endurance by 50 percent over the "Legacy" Hornet. The empty weight of the Super Hornet is about 11,000 lb (5,000 kg) less than that of the F-14 Tomcat which it replaced, while approaching, but not matching, the F-14's payload and range.

The Super Hornet, unlike the previous Hornet, is designed so it can be equipped with an aerial refueling system (ARS) or "buddy store" for the refueling of other aircraft, filling the tactical airborne tanker role the Navy had lost with the retirement of the KA-6D and Lockheed S-3B Viking tankers. The ARS includes an external 330 US gallons (1,200 L) tank with hose reel on the centerline, along with four external 480 US gallons (1,800 L) tanks and internal tanks, for a total of 29,000 pounds (13,000 kg) of fuel on the aircraft. The forward fuselage is unchanged, but the remainder of the aircraft shares little with earlier F/A-18C/D models. The fuselage was stretched by 34 inches (860 mm) to make room for fuel and future avionics upgrades and increased the wing area by 25%. However, the Super Hornet has 42% fewer structural parts than the original Hornet design. The General Electric F414 engine, developed from the Hornet's F404, has 35% additional thrust over most of the aircraft's flight envelope. The Super Hornet can return to an aircraft carrier with a larger load of unspent fuel and munitions than the original Hornet. The term for this ability is known as "bringback". Bringback for the Super Hornet is in excess of 9,000 pounds (4,100 kg).

Other differences include approximately rectangular intakes for the engines and two extra wing hard points for payload (for a total of 11). Among the most significant aerodynamic changes are the enlarged leading edge extensions (LEX) which provide improved vortex lifting characteristics in high angle of attack maneuvers, and reduce the static stability margin to enhance pitching characteristics. This results in pitch rates in excess of 40 degrees per second, and high resistance to departure from controlled flight.

Survivability is an important feature of the Super Hornet design. The U.S. Navy took a "balanced approach" to survivability in its design. This means that it does not rely on low-observable technology, such as stealth systems, to the exclusion of other survivability factors. Instead, its design incorporates a combination of stealth, advanced electronic-warfare capabilities, reduced ballistic vulnerability, the use of standoff weapons, and innovative tactics that cumulatively and collectively enhance the safety of the fighter and crew.

Two U.S. Navy F/A-18E Super Hornets fly a combat patrol over Afghanistan in 2008. The aircraft banking away in the background can be seen launching infra-red countermeasure flares.

The F/A-18E/F's radar cross-section was reduced greatly from some aspects, mainly the front and rear. The design of the engine inlets reduces the aircraft's frontal radar cross-section. The alignment of the leading edges of the engine inlets is designed to scatter radiation to the sides. Fixed fanlike reflecting structures in the inlet tunnel divert radar energy away from the rotating fan blades.

The Super Hornet also makes considerable use of panel joint serration and edge alignment. Considerable attention has been paid to the removal or filling of unnecessary surface join gaps and resonant cavities. Where the F/A-18A-D used grilles to cover various accessory exhaust and inlet ducts, the F/A-18E/F uses perforated panels that appear opaque to radar waves at the frequencies used. Careful attention has been paid to the alignment of many panel boundaries and edges, to direct reflected waves away from the aircraft in uniformly narrow angles.

It is claimed that the Super Hornet employs the most extensive radar cross section reduction measures of any contemporary fighter, other than the F-22 and F-35. While the F/A-18E/F is not a true stealth fighter like the F-22, it will have a frontal radar cross-section an order of magnitude smaller than prior generation fighters.

Additional RCS reduction measures can be installed on an as needed basis.

Initially, the Super Hornet's avionics and software had a 90% commonality with that of the F/A-18C/D fleet at the time. Differences include a touch-sensitive, up-front control display; a large liquid-crystal multipurpose color display; and a fuel display. The Super Hornet has a quadruplex digital fly-by-wire system, as well as a digital flight-control system that detects and corrects for battle damage. Initial production models used the APG-73 radar, later replaced by the APG-79 Active Electronically Scanned Array (AESA). The AN/ASQ-228 ATFLIR (Advanced Targeting Forward Looking InfraRed), is the main electro-optical sensor and laser designator pod for the Super Hornet. The communications equipment consist of an AN/ARC-210 VHF/UHF radio and a MIDS low volume terminal for HAVE QUICK, SINCGARS and Link 16 connectivity. The defensive countermeasures of Block I aircraft includes the AN/ALR-67(V)3 radar warning receiver, the AN/ALE-47 countermeasures dispenser, the AN/ALE-50 towed decoy and the AN/ALQ-165 Airborne Self-Protect Jammer (ASPJ). Newer Block II aircraft replace the ALQ-165 with the AN/ALQ-214 Integrated Defensive Countermeasures (IDECM) system which consists of internally mounted threat receivers and optional self-protection jammers. The interior and exterior lighting on the Block II has also been changed to allow the air crew to use night vision goggles (NVG). The older ALE-50 decoys are being replaced by ALE-55 towed decoys, which can transmit jamming signals based on data received from the IDECM. The improved AN/ALQ-214 jammer was added on Super Hornet Block II.

The Super Hornet Block II configuration includes the new APG-79 AESA radar; it enables its crew to execute simultaneous air-to-air and air-to-ground attacks. The APG-79 also provides higher quality high-resolution ground mapping at long standoff ranges. The AESA radar can also detect smaller targets, such as inbound missiles and can track air targets beyond the range of the Super Hornet's own air to air missiles. VFA-213 became "safe for flight" (independently fly and maintain the F/A-18F) on 27 October 2006 and is the first Super Hornet squadron to fly AESA-equipped Super Hornets.

The first Super Hornet upgraded with an aft cockpit Joint Helmet Mounted Cueing System (JHMCS) was delivered to VFA-213 on 18 May 2007. The JHMCS provides multi-purpose aircrew situational awareness including high-off-bore-sight cuing of the AIM-9X Sidewinder missile. The Shared Reconnaissance Pod (SHARP) is a high-resolution, digital tactical air reconnaissance system that features advanced day/night and all-weather capability. The Multifunctional Information Distribution System low volume communication terminal is being upgraded with the MIDS-JTRS system, which will allow a tenfold increase in bandwidth as well as compatibility with the Joint Tactical Radio System standards. Initial operational capability is planned for January 2011.

An F/A-18F parked on the flight deck of aircraft carrier USS Dwight D. Eisenhower, as the ship operates in the Arabian Sea, December 2006