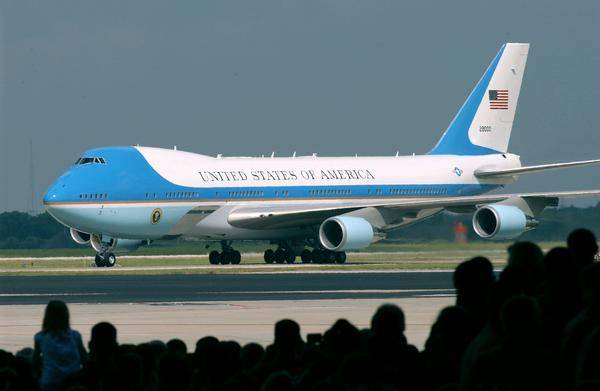 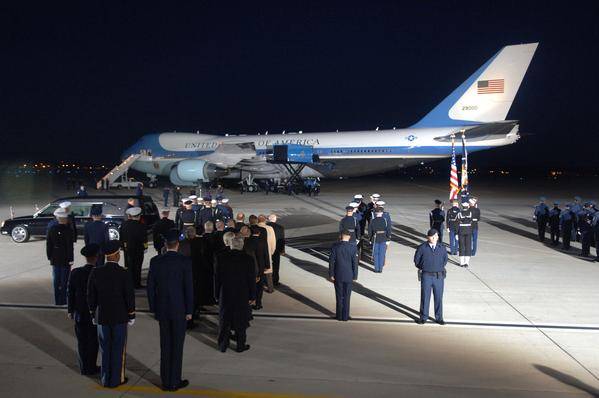 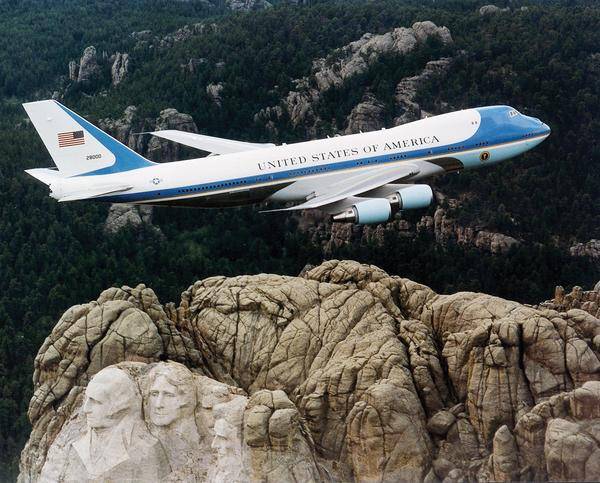 The Boeing VC-25 is the designation of a United States Air Force passenger transportation aircraft, a military version of the Boeing 747 airliner. The A-model (VC-25A) is the only variant of the VC-25.

The VC-25 is most famous for its role as Air Force One, the call sign of any U.S. Air Force aircraft carrying the President of the United States. The two aircraft currently in U.S. service are highly modified versions of Boeing's 747-200B, with tail numbers 28000 and 29000. Although the Air Force One designation technically applies to the aircraft only while the President is aboard, the term is commonly applied to the VC-25s more generally. They often operate in conjunction with Marine One helicopters that ferry the President to airports in circumstances where a vehicle motorcade would be inappropriate.

The President and First Lady's private quarters. The couches can fold out into beds.

The corridor that runs down the port (left) side of the aircraft. Secret Service agents are stationed in the two chairs.

The front of the aircraft is referred to as the "White House" of the aircraft. The president's executive suite includes sleeping quarters with two couches that can be converted into beds, lavatory and shower, vanity, double sink, and a private office, or the president’s "Oval Office aboard Air Force One". If necessary, the president can address the nation from the office. This capability was added after the September 11 attacks, during which the aircraft had to land at Barksdale Air Force Base in order for President George W. Bush to address the nation. These offices, including the president's suite, are mostly located on the starboard(right) side, and a long corridor runs along the port (left) side. There is an area along the corridor for two Secret Service agents. The aircraft also contains a conference room, originally designed as a situation room but now used for meeting with staff while traveling. This room includes a 50-inch plasma screen television which can be used for teleconferencing. The aircraft has fully equipped office areas with telecommunication systems (including 87 telephones and 19 televisions).

On board the VC-25 is a medical annex, which includes a fold-out operating table, emergency medical supplies, and a well-stocked pharmacy; George W. Bush had a treadmill added to Air Force One during his term in office. Every flight is staffed by a doctor and nurse. The aircraft is self-sufficient, such as carrying all the food it will need. Meals are prepared in two galleys, which together are equipped to feed up to 100 people at a time. The President gets his own menu. An area where guests sit is near the center of the aircraft, outside of the "White House".

There are separate quarters for guests, senior staff, Secret Service and security personnel, and the news media located in the aft area of the main deck. Protocol states that one may wander aft of wherever one's assigned seat is, but not forward. Communications equipment and the cockpit are on the upper deck. There are also secure and non-secure voice, fax and data communications facilities. While the aircraft's luggage capacity is adequate to carry the belongings of the passengers, the logistics train of the President means that the aircraft must fly preceded by an aerial convoy of several cargo transports, which carry the helicopters, motorcade vehicles, and other equipment required by the presidential entourage.

The VC-25 is capable of flying 7,800 miles (12,600 km)—roughly one-third the distance around the world—without refueling. It can be refuelled during flight from a tanker aircraft. The VC-25A can accommodate more than 70 passengers. Each VC-25A cost approximately US$325 million. When a VC-25 taxis to an airport's ramp for events, it stops with the port side of the aircraft facing gathered onlookers.