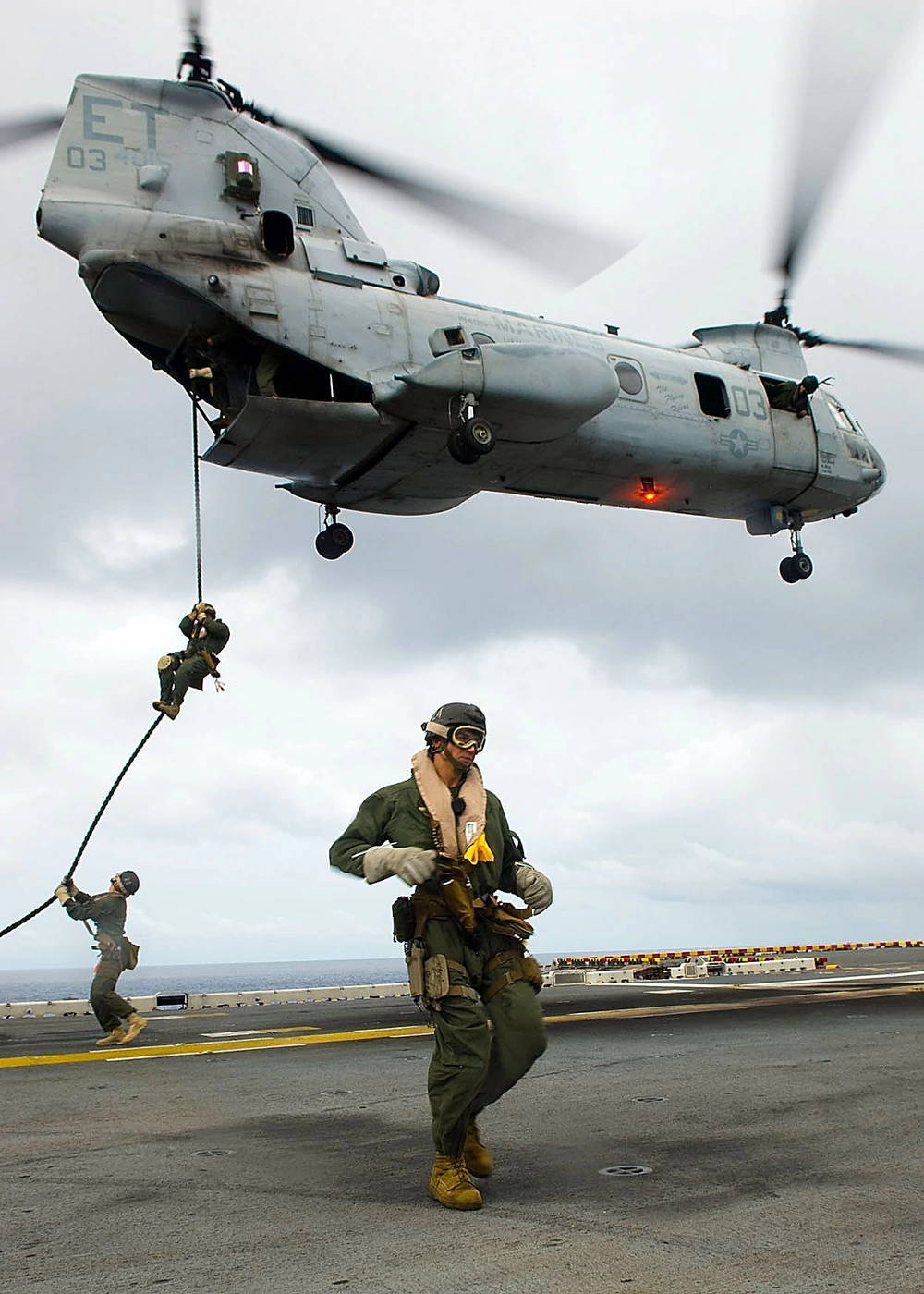 The Boeing Vertol CH-46 Sea Knight is a medium-lift tandem rotor transport helicopter. It is used by the United States Marine Corps (USMC) to provide all-weather, day-or-night assault transport of combat troops, supplies and equipment. Additional tasks include combat support, search and rescue (SAR), support for forward refueling and rearming points, CASEVAC and Tactical Recovery of Aircraft and Personnel (TRAP). The Sea Knight was also the U.S. Navy's standard medium-lift utility helicopter until it was phased out in favor of the MH-60S Knighthawk in the early 2000s.

Canada also operated the Sea Knight, designated as CH-113, and operated them in the SAR role until 2004. Other export customers include Japan, Sweden, and Saudi Arabia. The commercial version is the BV 107-II, commonly referred to simply as the "Vertol".

The CH-46 has tandem contrarotating rotors powered by two GE T58 turboshaft engines. The engines are mounted on each side of the rear rotor pedestal with a driveshaft to the forward rotor. The engines are coupled so either could power both rotors in an emergency. The rotors feature three blades and can be folded for on-ship operations. The CH-46 has fixed tricycle landing gear, with twin wheels on all three units. The gear configuration causes a nose-up stance to facilitate cargo loading and unloading. The main gear are fitted in rear sponsons that also contain fuel tanks with a total capacity of 350 US gallons (1,438 L).

The CH-46 has a cargo bay with a rear loading ramp that could be removed or left open in flight for extended cargo or for parachute drops. An internal winch is mounted in the forward cabin and can be used to pull external cargo on pallets into the aircraft via the ramp and rollers. A belly sling hook (cargo hook) which is usually rated at 10,000 lb (4,500 kg). could be attached for carrying external cargo. Although the hook is rated at 10,000 lb (4,500 kg)., the limited power produced by the engines preclude the lifting of such weight. It usually has a crew of three, but can accommodate a larger crew depending on mission specifics. For example, a Search and Rescue variant will usually carry a crew of five (Pilot, Co-Pilot, Crew Chief, Swimmer, and Medic) to facilitate all aspects of such a mission. A pintle-mounted 0.50 in (12.7 mm) Browning machine gun is mounted on each side of the helicopter for self-defense. Service in southeast Asia resulted in the addition of armor with the guns.