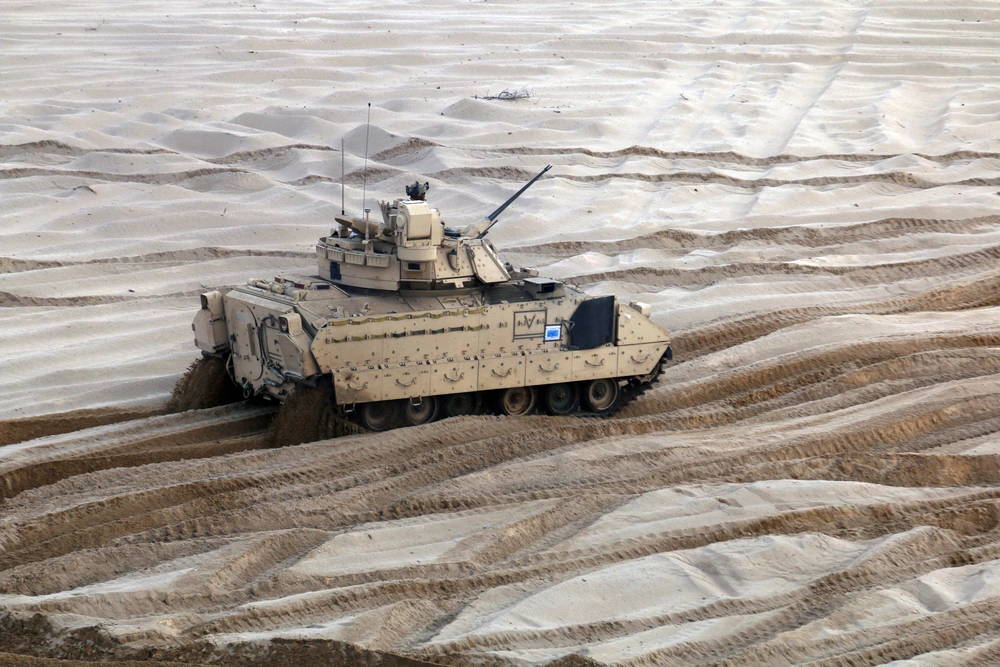 The Bradley is designed to transport infantry or scouts with armor protection while providing covering fire to suppress enemy troops and armored vehicles. There are several Bradley variants, including the M2 Infantry Fighting Vehicle and the M3 Cavalry Fighting Vehicle. The M2 holds a crew of three: a commander, a gunner and a driver, as well as six fully equipped soldiers. The M3 mainly conducts scout missions and carries two scouts in addition to the regular crew of three, with space for additional TOW missiles.

The Bradley was developed largely in response to the Soviet BMP family of infantry fighting vehicles, and to serve as both an Armored personnel carrier (APC), and a tank-killer. One specific design requirement was that it should be as fast as the then new M1 Abrams main battle tank so that they could maintain formations while moving, something which the older M113 Armored Personnel Carrier could do even better thanks to superior engine power/weight ratio, even though it had been designed to complement the older and slower M60 Patton.

The M2 Bradley Infantry Fighting Vehicle (IFV) consists of four variants: the M2, M2A1, M2A2 and M2A3. Their main mission is to provide protected transport of an infantry squad (up to six passengers at a time) to critical points. Aside from carrying mechanized infantry into close contact with the enemy, the M2 can also provide overwatching fire to dismounting infantrymen. The M2 Infantry Fighting Vehicle also has six external firing ports for the squad M231 Firing Port Weapon on the M2 and M2A1 versions only. Four ports were removed on the sides of the vehicle on the M2A2-A3 versions, and only 2 in the ramp remain. These ports allow passengers to engage the enemy from within the protection of the Bradley vehicle. These firing ports are almost always covered by additional armor kits and it is rare to see a Bradley with them operable. The proper use of M231 FPWs was rare in practice. It is adequately armored to provide protection against small arms fire and artillery, as well as being able to destroy any vehicle on the battlefield using its TOW or Stinger missiles.

The M3 Bradley Cavalry Fighting Vehicle (CFV) is virtually identical to the M2 Bradley except that it is equipped as a cavalry/scout vehicle. Instead of holding six infantrymen in the payload compartment, it is designed to seat two scouts and hold additional radios and ammunition. Also lacking are the six external firing ports present on the M2 Bradley IFV.

The C2V is based on the M993 MLRS carrier chassis (see below) and is designed to provide an automated tactical command post and operations centers. It was designed to replace the M113-based M577A2 Command Post Carrier. Mass production was cancelled in late 1999. Around 25 vehicles were finally produced for the US Army.

The BSFV is designed specifically for the carriage and support of a Stinger MANPADS team. The MANPADS-Under-Armor (MUA) dismounted Stinger team concept of the BSFV left the operators exposed, so it was replaced by the M6 Linebacker, which also retained the dismounted Stinger missile capability.

Modified M2A2 ODSs with the TOW missile system replaced with a two-tube Javelin Missile System, and ISU (Integrated Sight Unit) modifications for increased anti-tank lethality, without the need to continually track the target.

The B-FiST has replaced the existing armored FiST vehicle (FiST-V) platform, the M981 FISTV, in the U.S. Army inventory. The TOW/UA suite is replaced by target location equipment, integrated with the Bradley ISU sight unit. It also carries equipment for use by dismounted observers. There is a hybrid GPS/inertial/dead reckoning navigation system to robustly provide the vehicle location as a reference point.

The Bradley ESV enables engineer assests to maintain momentum with the main force while conducting engineer and sapper operations. The ESV is equipped with standard combat engineering equipment and can employ unique mission equipment packages for obstacle neutralization.

The Bradley BCV allows brigade commanders to move around the battlefield away from their command post. The BCV integrates an enhanced command and control communication suite to maintain digital interface with maneuver forces and the Tactical Operations Center (TOC).

The Black Knight prototype unmanned ground combat vehicle being developed by BAE resembles a tank and makes extensive use of components from the Bradley Combat Systems program to reduce costs and simplify maintenance. It is also designed to be remotely operated from a BFV commander's station while riding mounted, as well as being controllable by dismounted infantry.

For the U.S. Army's Armored Multi-Purpose Vehicle (AMPV) program to replace the M113, BAE is offering a new version of the Bradley. The AMPV submission is a turretless Bradley chassis, which gives greater cargo space, as well as increased armor and upgraded engine and electrical power systems. For increased protection, a v-shaped bottom will replace the flat bottom. The AMPV version will also have different roof sections with varying heights to make it modular for each role. The engine and transmission are the same as other Bradleys. For better fuel efficiency, BAE is considering giving the Turretless Bradley a hybrid-electric drive, similar to the one used in their GCV Infantry Fighting Vehicle. It is suggested that the vast fleet of surplus Bradleys could be retrofitted into this version. The Turretless Bradley is competing against General Dynamics' Tracked Stryker for the contract.