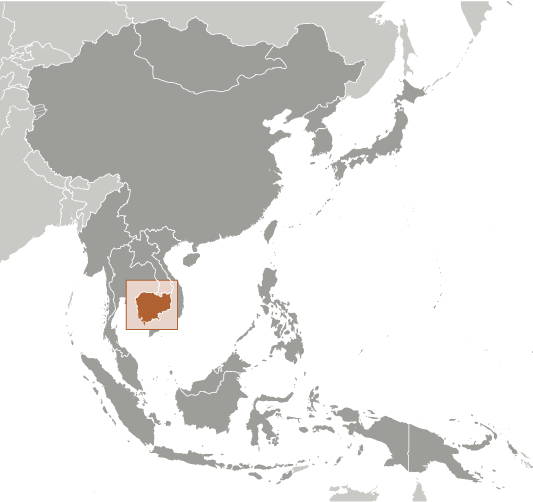 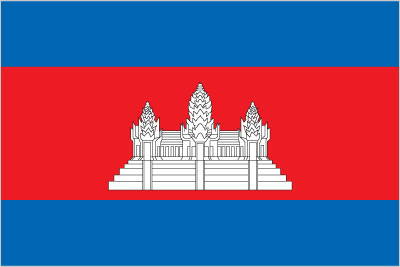 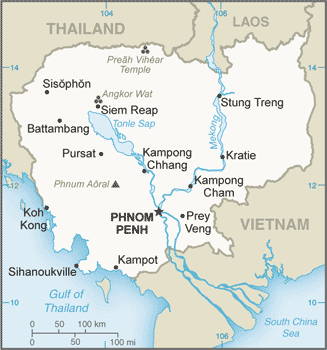 country comparison to the world:  59

Cambodia is concerned about Laos' extensive upstream dam construction; Cambodia and Thailand dispute sections of boundary; in 2011 Thailand and Cambodia resorted to arms in the dispute over the location of the boundary on the precipice surmounted by Preah Vihear Temple ruins, awarded to Cambodia by ICJ decision in 1962 and part of a UN World Heritage site; Cambodia accuses Vietnam of a wide variety of illicit cross-border activities; progress on a joint development area with Vietnam is hampered by an unresolved dispute over sovereignty of offshore islands

current situation: Cambodia is a source, transit, and destination country for men, women, and children subjected to forced labor and sex trafficking; Cambodian men, women, and children migrate to countries within the region for legitimate work but are subsequently subjected to sex trafficking, domestic servitude, debt bondage, or forced labor; the inability to understand formal obligations, read contracts, or pay processing fees, and inadequate government regulatory oversight renders some Cambodian migrant workers vulnerable to such exploitation; poor Cambodian children are subject to forced labor, including forced begging in Thailand and Vietnam; Cambodian and ethnic Vietnamese women and girls are trafficked from rural areas to urban centers for sexual exploitation; Cambodian men are the main exploiters of child prostitutes, but men from other Asian countries, the US, and Europe travel to Cambodia for child sex tourism

tier rating: Tier 2 Watch List - Cambodia does not fully comply with the minimum standards for the elimination of trafficking; however, it is making significant efforts to do so; the government has prosecuted and convicted fewer trafficking offenders and identified fewer victims than in the previous year; corruption continues to impede anti-trafficking endeavors; authorities systematically refer identified victims to NGO shelters, which provide the majority of services but lack long-term care services, making victims, particularly children, vulnerable to re-trafficking; the government has established a migration working group within its anti-trafficking committee to better address the exploitation of Cambodian workers abroad, but laws governing migrant workers abroad remain weak (2013)

narcotics-related corruption reportedly involving some in the government, military, and police; limited methamphetamine production; vulnerable to money laundering due to its cash-based economy and porous borders