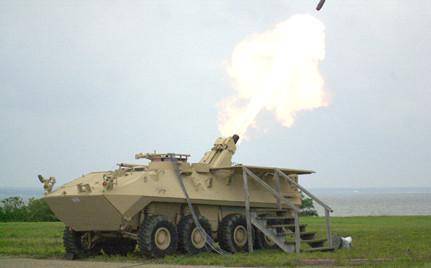 The Dragon Fire 120 mm heavy mortar was a private venture by TDA Armaments that was picked up by the US Marine Corps for its EFSS (Expeditionary Fire Support System) requirement. It is a fully automated mortar capable of using rifled or smoothbore 120 mm ammunition. Like all mortars it is a high-angle-of-fire weapon used for indirect fire support. Dragon Fire is also expected to be effective in a counter-battery role.

The Dragon Fire mortar system can be deployed mounted in an LAV, towed by a HMMWV, or air deployed by CH-53 Sea Stallion helicopter or V-22 Osprey. Mounting in an LAV does not require a separate mount; its towing carriage can be converted to an LAV mount in five minutes. After deployment the crew can control the weapon system from a remote station. In operation it is designed to be fully automatic: loading, computing firing solutions, aiming and firing automatically. From an unloaded condition, the weapon is capable of loading, completing a firing solution, aiming, and firing the first round within 14 seconds of receiving an order. The weapon is also capable of being operated manually in the event of failure of an automatic system.

The advanced fire control system is fully compatible with the US Army system, to reduce the risk of friendly fire (fratricide) incidents.