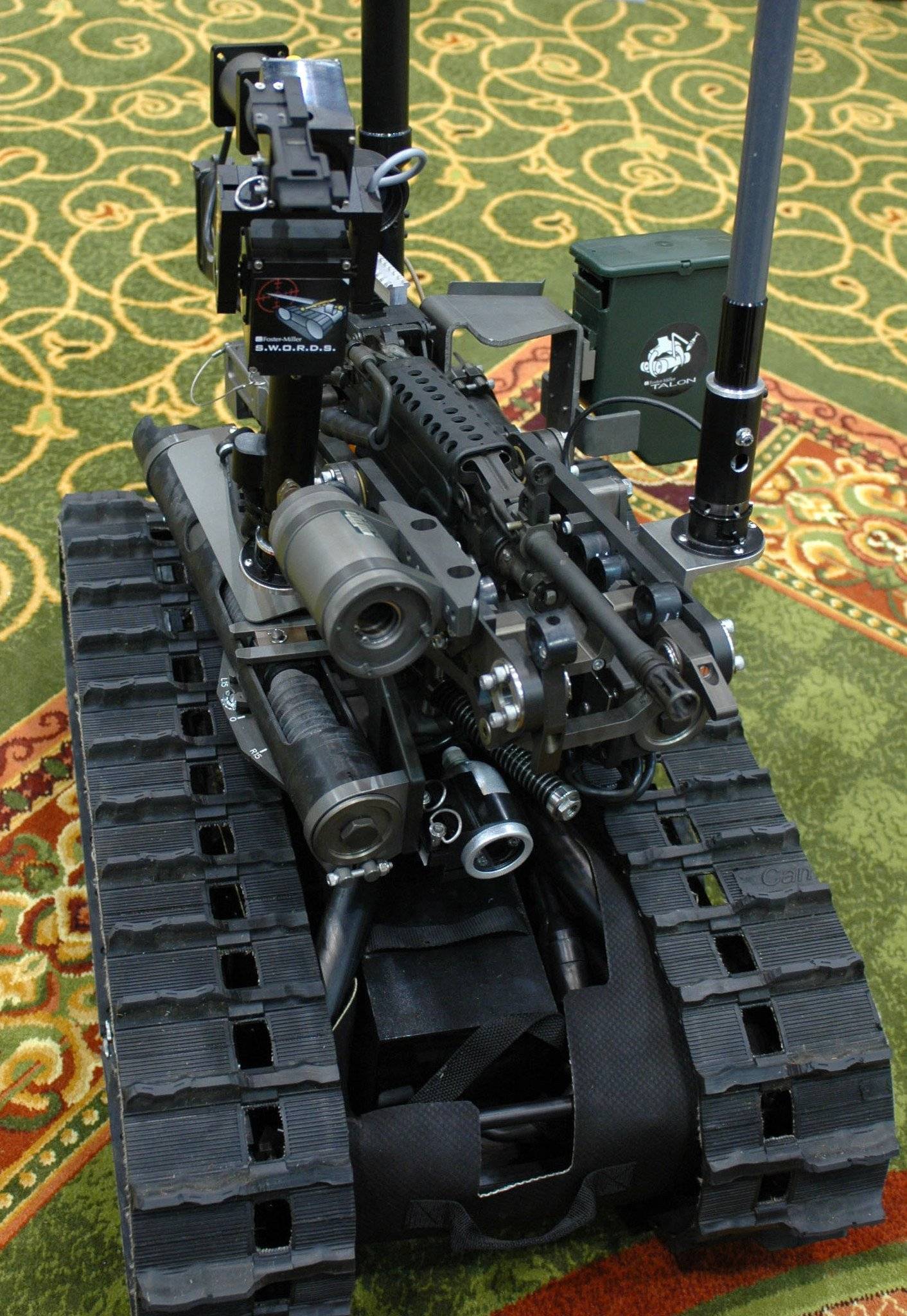 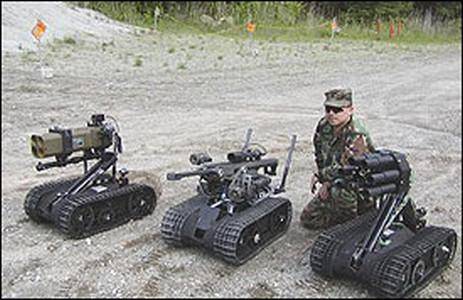 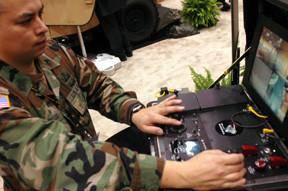 The Foster-Miller TALON remotely operated vehicle is a small, tracked military robot designed for missions ranging from reconnaissance to combat.

Foster-Miller claims the TALON is one of the fastest robots in production, one that can travel through sand, water, and snow as well as climb stairs. The TALON transmits in color, black and white, infrared, and/or night vision to its operator, who may be up to 1,000 m away. It can run off lithium-ion batteries for a maximum of 7 days on standby independently before needing recharging. It has an 8.5 hour battery life at normal operating speeds, 2 standard lead batteries providing 2 hours each and 1 optional Lithium Ion providing an additional 4.5 hours. It can also withstand repeated decontamination allowing it to work for long periods of time in contaminated areas. It was used in Ground Zero after the September 11 attacks working for 45 days with many decontaminations without electronic failure. This led to the further development of the HAZMAT TALON.

It weighs less than 100 lb (45 kg) or 60 lb (27 kg) for the Reconnaissance version. Its cargo bay accommodates a variety of sensor payloads. The robot is controlled through a two-way radio or a Fiber-optic link from a portable or wearable Operator Control Unit (OCU) that provides continuous data and video feedback for precise vehicle positioning.

Regular (IED/EOD) TALON: Carries sensors and a robotic manipulator, which is used by the U.S. Military for explosive ordnance disposal and disarming improvised explosive devices.

Special Operations TALON (SOTAL): Does not have the robotic arm manipulator but carries day/night color cameras and listening devices; lighter due to the absence of the arm, for reconnaissance missions.

SWORDS TALON: For small arms combat and guard roles. Tested in December 2003 in Kuwait prior to deployment in Iraq.

HAZMAT TALON: Uses chemical, gas, temperature, and radiation sensors that are displayed in real time to the user on a hand-held display unit. It is now being tested by the US Armament Research Development and Engineering Center ARDEC.

The robot costs approximately $60,000 in its standard form. Foster-Miller was subsequently bought out by QinetiQ, a United Kingdom military developer.

SWORDS or the Special Weapons Observation Reconnaissance Detection System, is a weaponized version being developed by Foster-Miller for the US Army. The robot is composed of a weapons system mounted on the standard TALON chassis. The current price of one unit is $230,000; however, Foster-Miller claims that when it enters mass production the price may drop to between $150,000 and $180,000.

SWORDS units have demonstrated the ability to shoot precisely. It is not autonomous, but instead has to be controlled by a soldier using a small console to remotely direct the device and fire its weapons. Foster-Miller are currently at work on a "Game Boy" style controller with virtual-reality goggles for future operators.

In 2007, three SWORDS units were deployed to Iraq. Each unit is armed with a M249 machine gun. This deployment marks the first time that robots are carrying guns into battle; however, their weapons have remained unused as the Army has never given the go-ahead for using them. The Army stopped funding the SWORDS robots after deploying the initial three robots. Foster-Miller is working on a successor: the Modular Advanced Armed Robotic System (MAARS)

By August 2013, the Smithsonian Institution had acquired a SWORDS robot for its collection. One is also on display at the National Infantry Museum in Fort Benning, Georgia.

The Talon has been deployed in military service since 2000 - for example, in Bosnia for the movement of munitions and EOD (explosive ordnance disposal) to get rid of grenades. It was also used in Ground Zero after the September 11th attacks in search and recovery. It is the only robot used in this effort that did not require any major repair. Foster-Miller claims the Talon was used for a classified mission by US Special Forces in the war against the Taliban in Afghanistan as well as in an EOD role. In Iraq its standard role has been performing EOD and IED destruction missions. Its combat SWORDS version is now being used there in a guard role protecting front line buildings from attack. According to Foster-Miller, the robot has performed around 20,000 EOD missions in the conflicts in Iraq and Afghanistan.