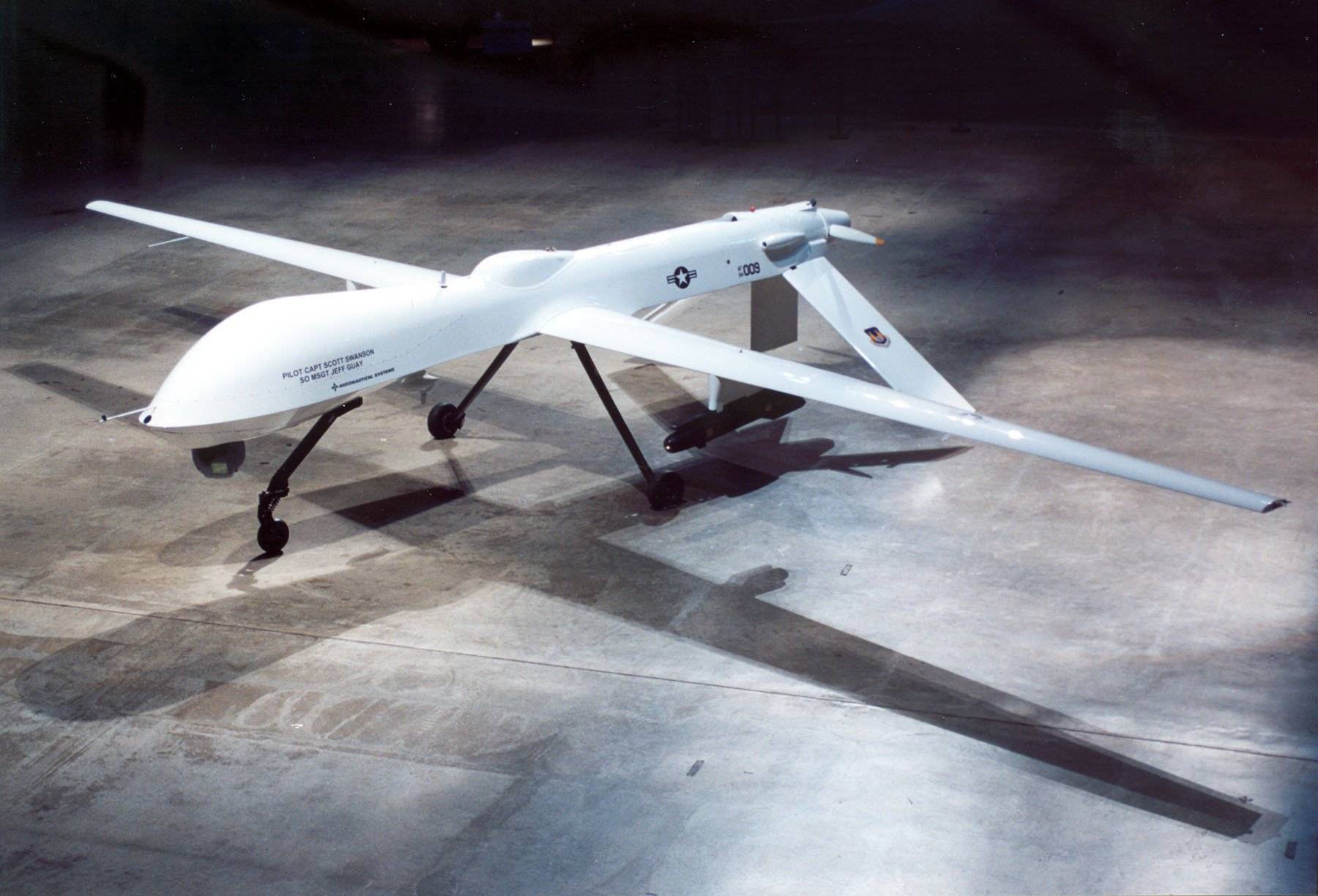 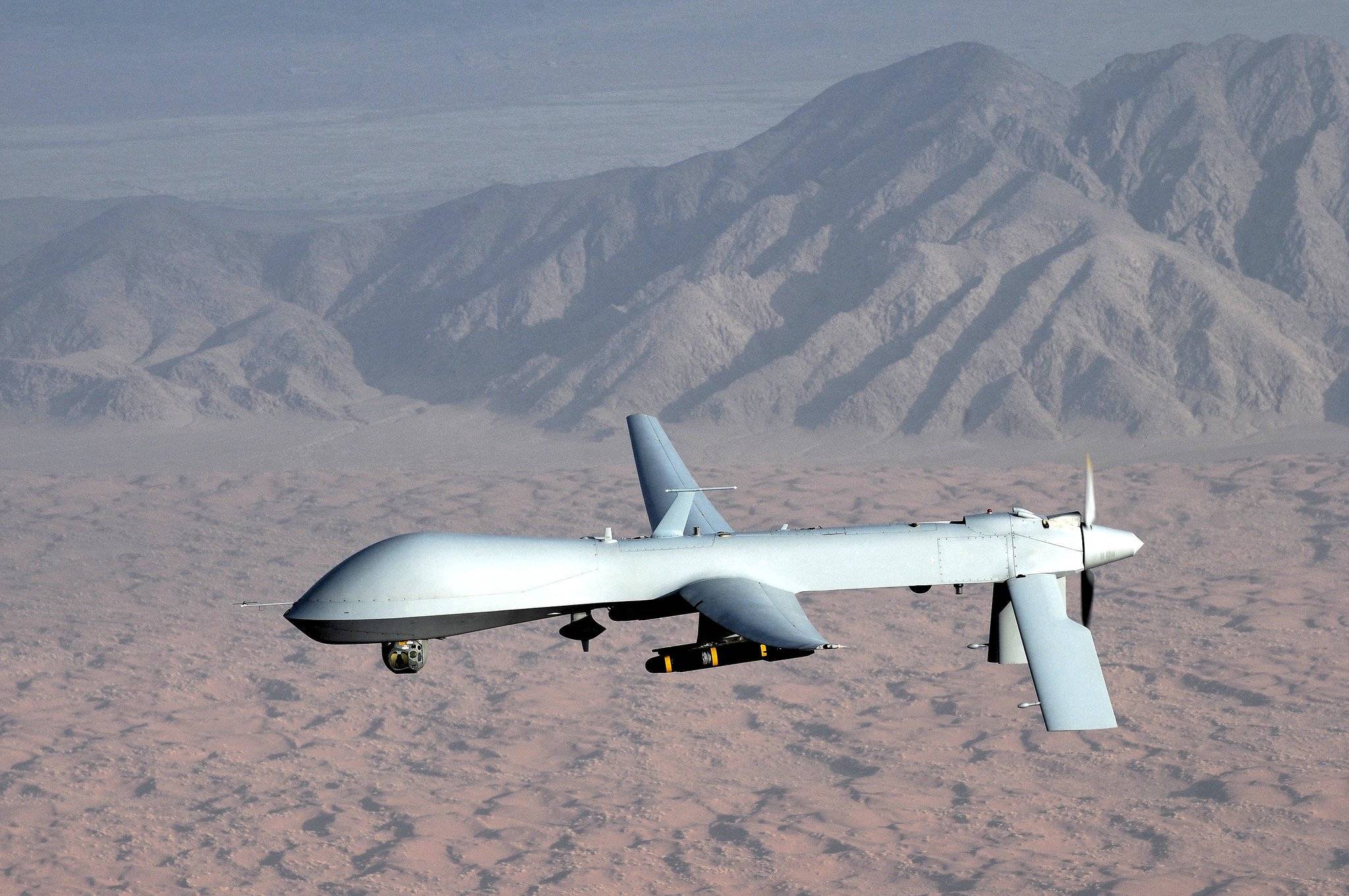 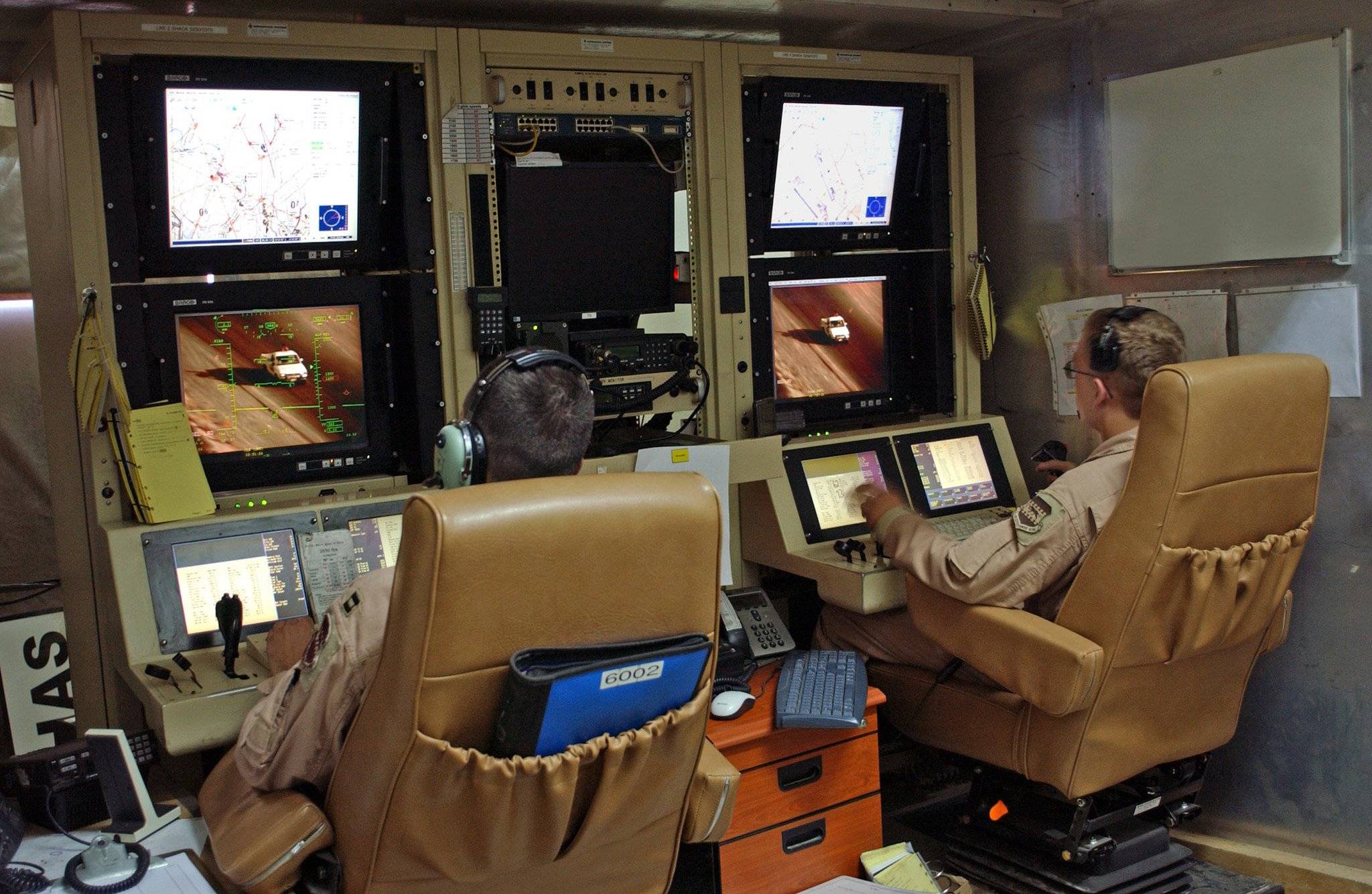 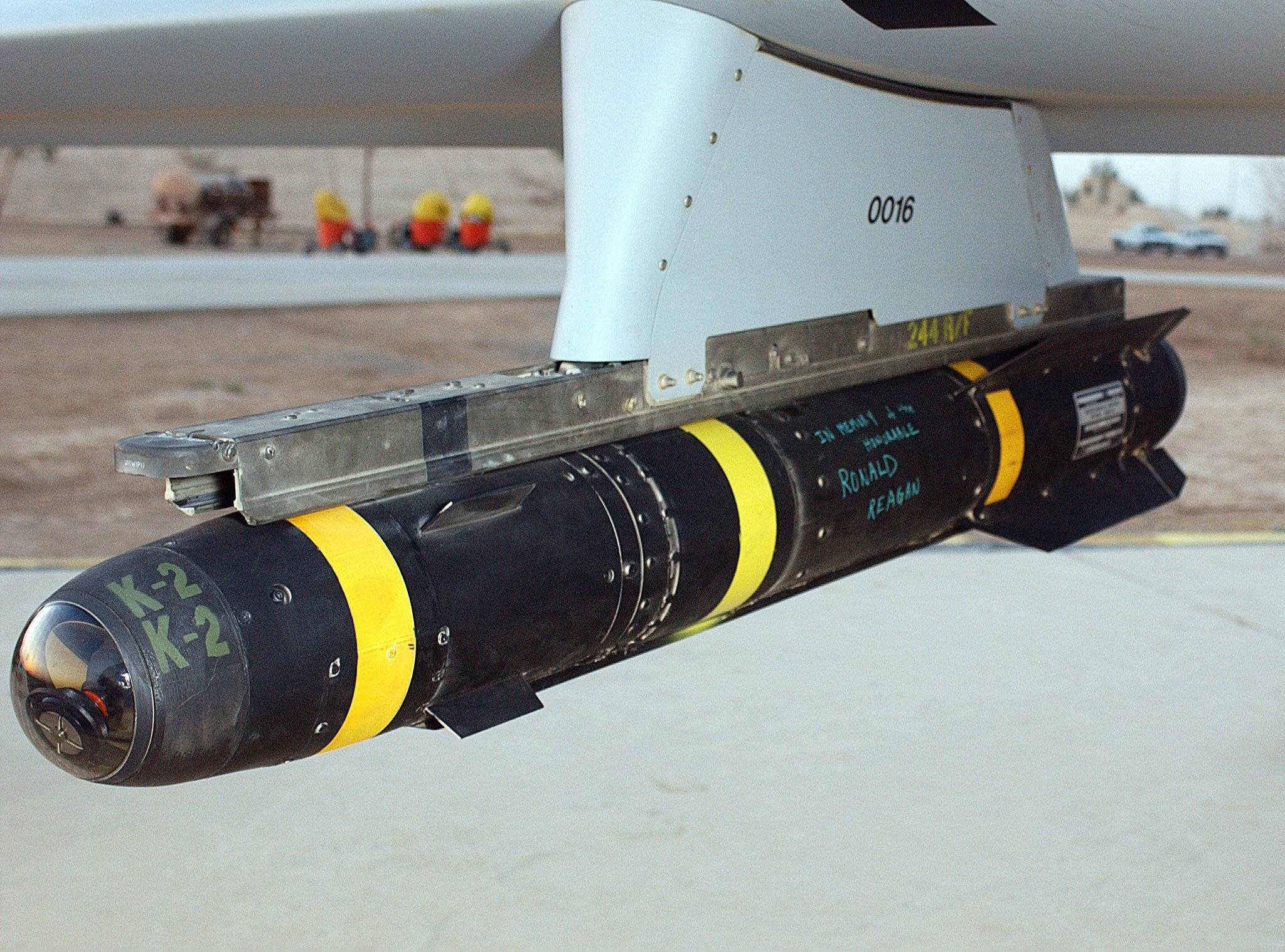 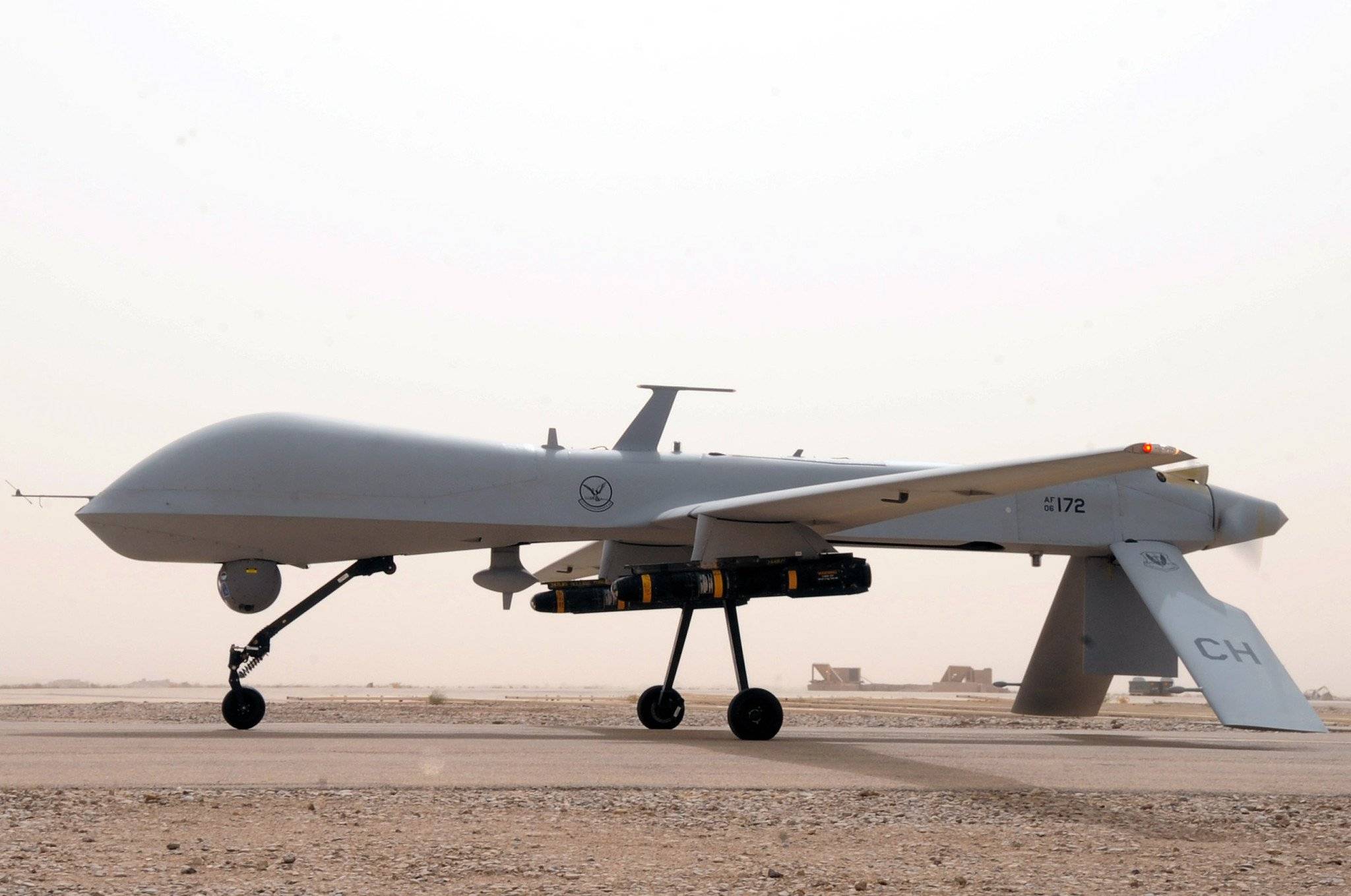 The General Atomics MQ-1 Predator is an unmanned aerial vehicle (UAV) built by General Atomics and used primarily by the United States Air Force (USAF) and Central Intelligence Agency (CIA). Initially conceived in the early 1990s for reconnaissance and forward observation roles, the Predator carries cameras and other sensors but has been modified and upgraded to carry and fire two AGM-114 Hellfire missiles or other munitions. The aircraft, in use since 1995, has seen combat over Afghanistan, Pakistan, Bosnia, Serbia, Iraq,Yemen, Libya, and Somalia.

The USAF describes the Predator as a "Tier II" MALE UAS (medium-altitude, long-endurance unmanned aircraft system). The UAS consists of four aircraft or "air vehicles" with sensors, a ground control station (GCS), and a primary satellite link communication suite. Powered by a Rotax engine and driven by a propeller, the air vehicle can fly up to 400 nautical miles (740 km) to a target, loiter overhead for 14 hours, then return to its base.

Following 2001, the RQ-1 Predator became the primary unmanned aircraft used for offensive operations by the USAF and the CIA in Afghanistan and the Pakistani tribal areas; it has also been deployed elsewhere. Because offensive uses of the Predator are classified, U.S. military officials have reported an appreciation for the intelligence and reconnaissance-gathering abilities of UAVs but declined to publicly discuss their offensive use.

Civilian applications have included border enforcement and scientific studies, and to monitor wind direction and other characteristics of large forest fires (such as the one that was used by the California Air National Guard in the August 2013 Rim Fire). A Predator flies on a simulated Navy aerial reconnaissance flight off the coast of southern California on December 5, 1995.

The Central Intelligence Agency (CIA) and the Pentagon began experimenting with reconnaissance drones in the early 1980s. The CIA preferred small, lightweight, unobtrusive drones, in contrast to the United States Air Force (USAF). In the early 1990s, the CIA became interested in the "Amber", a drone developed by Leading Systems, Inc. The company's owner, Abraham Karem, was the former chief designer for the Israeli Air Force, and had emigrated to the U.S. in the late 1970s. Karem's company had since gone bankrupt and been bought up by a U.S. defense contractor, from whom the CIA secretly bought five drones (now called the "GNAT"). Karem agreed to produce a quiet engine for the vehicle, which had until then sounded like "a lawnmower in the sky". The new development became known as the "Predator".

General Atomics Aeronautical Systems (GA) was awarded a contract to develop the Predator in January 1994, and the initial Advanced Concept Technology Demonstration (ACTD) phase lasted from January 1994 to June 1996. The aircraft itself was a derivative of the GA Gnat 750. During the ACTD phase, three systems were purchased from GA, comprising twelve aircraft and three ground control stations.

From April through May 1995, the Predator ACTD aircraft were flown as a part of the Roving Sands 1995 exercises in the U.S. The exercise operations were successful, and this led to the decision to deploy the system to the Balkans later in the summer of 1995.

During the ACTD, Predators were operated by a combined Army/Navy team managed by the Navy's Joint Program Office for Unmanned Aerial Vehicles (JPO-UAV) and first deployed to Gjader, Albania, for operations in the Former Yugoslavia in spring 1995.

By the start of the United States Afghan campaign in 2001, the USAF had acquired 60 Predators, and said it had lost 20 of them in action. Few if any of the losses were from enemy action, the worst problem apparently being foul weather, particularly icy conditions. Some critics within the Pentagon saw the high loss rate as a sign of poor operational procedures. In response to the losses caused by cold weather conditions, a few of the later USAF Predators were fitted with de-icing systems, along with an uprated turbocharged engine and improved avionics. This improved "Block 1" version was referred to as the "RQ-1B", or the "MQ-1B" if it carried munitions; the corresponding air vehicle designation was "RQ-1L" or "MQ-1L".

The Predator system was initially designated the RQ-1 Predator. The "R" is the United States Department of Defense designation for reconnaissance and the "Q" refers to an unmanned aircraft system. The "1" describes it as being the first of a series of aircraft systems built for unmanned reconnaissance. Pre-production systems were designated as RQ-1A, while the RQ-1B (not to be confused with the RQ-1 Predator B, which became the MQ-9 Reaper) denotes the baseline production configuration. These are designations of the system as a unit. The actual aircraft themselves were designated RQ-1K for pre-production models, and RQ-1L for production models. In 2002, the USAF officially changed the designation to MQ-1 ("M" for multi-role) to reflect its growing use as an armed aircraft. Close up of the Hellfire missile pylon, 2004.

The USAF handed the Predator over to the service's Big Safari office after the Kosovo campaign in order to accelerate its testing in a strike role, fitted with reinforced wings and stores pylons to carry munitions, as well as a laser designator. This effort led to a series of tests, on February 21, 2001, in which the Predator fired three Hellfire anti-armor missiles, scoring hits on a stationary tank with all three missiles. The scheme was put into service, with the armed Predators given the new designation of MQ-1A. The Predator gives little warning of attack; it is relatively quiet and the Hellfire is supersonic, so it strikes before it is heard by the target.

In the winter of 2000–2001, after seeing the results of Predator reconnaissance in Afghanistan (see below), Cofer Black, head of the CIA's Counterterrorist Center (CTC), became a "vocal advocate" of arming the Predator with missiles to target Osama bin Laden in the country. He also believed that CIA pressure and practical interest was causing the USAF's armed Predator program to be significantly accelerated. Black, and "Richard", who was in charge of the CTC's Bin Laden Issue Station, continued to press during 2001 for a Predator armed with Hellfire missiles.

Further weapons tests occurred between May 22 and June 7, 2001, with mixed results. While missile accuracy was excellent, there were some problems with missile fuzing..." In the first week of June, in the Nevada Desert, a Hellfire missile was successfully launched on a replica of bin Laden's Afghanistan Tarnak residence. A missile launched from a Predator exploded inside one of the replica's rooms; it was concluded that any people in the room would have been killed. However, the armed Predator did not go into action before the September 11 attacks.

The USAF has also investigated using the Predator to drop battlefield ground sensors and to carry and deploy the "Finder" mini-UAV.