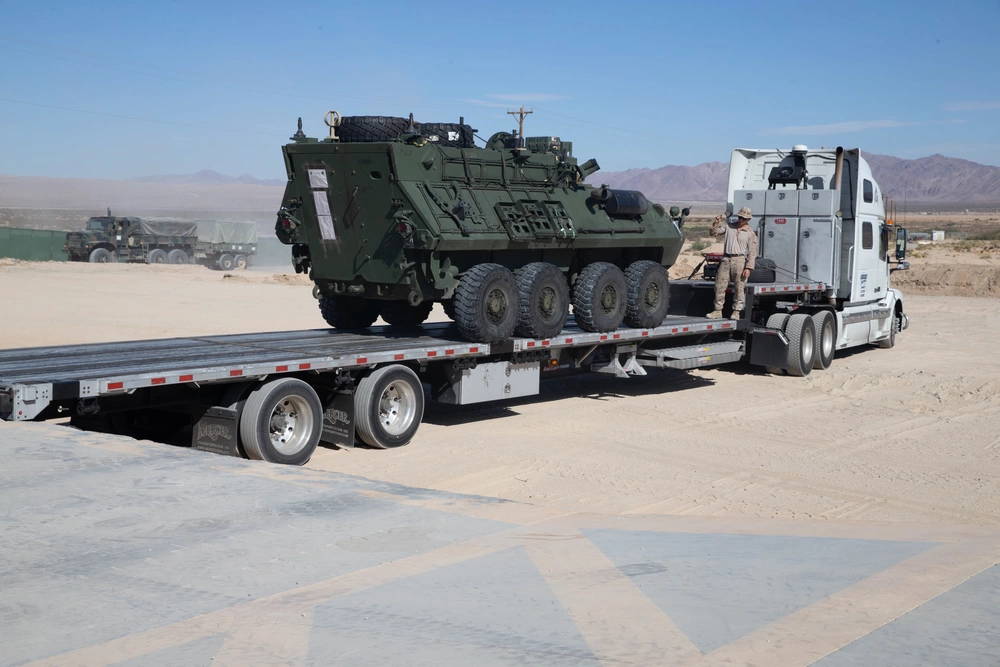 The LAV-25 is an eight-wheeled amphibious reconnaissance vehicle used by the United States Marine Corps. It was built by General Dynamics Land Systems Canada and is based on the Swiss MOWAG Piranha I 8×8 family of armored fighting vehicles.

GDLS also makes the LAV III armored vehicle that is based on MOWAG Piranha IIIH 8×8.

Standard LAV fitted with a turret with 360° traverse, armed with an M242 25 mm chain gun with 420 rounds of 25 mm ammunition, both M791 APDS-T (Armour Piercing Discarding Sabot-Tracer) and M792 HEI-T (High Explosive Incendiary-Tracer), of which half is ready for use. One hundred fifty rounds are ready for use from one stowage bin, 60 from another stowage bin, the other 210 rounds are stowed elsewhere in the vehicle. A coaxial M240C machine gun is mounted alongside the M242, and a pintle mounted M240 G/B machine gun, with 1,320 rounds of 7.62 mm ammunition, is mounted on the turret roof. The Canadian Army uses this chassis for its Coyote Armoured Reconnaissance Vehicle.

The vehicle has been through many changes through the late 1990s. The new modification or SLEP has changed the LAV-25 to the LAV-25A1standard and has been completely fielded.

Funding has been approved for continued upgrades to the LAV family to bring them up to the LAV-A2 standard. Phase I improvements include increased external and internal ballistic armor upgrades, improved fire suppression equipment, and upgrading the vehicle's suspension to the Generation II standard. Phase II upgrades include replacing the turret hydraulics with an electric drive system and replacing the thermal sight with an improved model incorporating a laser range finder.

To reflect the improved significant survivability and capability enhancements occurring today, the LAV is being renamed as the LAV-A2. The LAV-A2 project involved developing and installing an internal and external ballistic protection upgrade package for the Light Armored Vehicles, an automatic fire suppression system for the interior of the vehicle and a Generation II suspension upgrade to support the added weight of the new armor. The suspension upgrade includes new struts/steering knuckles, torsion bars, shocks and mounts and drive shaft. The three-kit armor system provides the LAV with additional survivability against improvised explosive devices (IED) and direct-fire kinetic energy weapons.

The LAV-25A2 includes the Improved Thermal Sight System (ITSS) developed by Raytheon, scheduled for fielding by the end of 2007. The ITSS provides the gunner and commander with thermal images, an eye-safe laser range finder, a fire-control solution and far-target location target grid information.

The new armor will provide protection from 14.5 mm armor-piercing rounds, and include an anti-spall lining on the inside to further protect crew members. It will be similar to the protection found on the U.S. Army's LAV III "Stryker" variant.

LAV fitted with an Emerson 901A1 TOW-2 ATGM (Anti-Tank Guided Missile) launcher, the same turret that was fitted on the M901 ITV (Improved TOW Vehicle). It is also armed with a pintle mounted M240E1 or M240B general-purpose machine gun. It carries a total of 16 TOW missiles, and 1,000 rounds of 7.62 mm ammunition.

LAV fitted with an electric turret mounting a General Dynamics GAU-12 Equalizer 25 mm (0.984 in) 5-barreled gatling cannon, and two missile pods each with 4× FIM-92 Stinger missiles for Short Range Air Defense (SHORAD) duties. Capacity for 990 rounds of 25 mm ammunition, and 16 (including 8 reload rounds) FIM-92 Stinger missiles. This variant has been removed from service. A variant using the Mistral missile in place of Stingers was developed for the export market.

LAV fitted with a boom crane, and recovery winch, for use in recovery of vehicles, specifically other LAVs. It is armed with a pintle mounted M240 E1/G machine gun, and carries 1,000 rounds of 7.62 mm ammunition.

LAV with a raised roof to accommodate several VHF, UHF and HF radios. It is armed with a pintle mounted M240 E1/G machine gun, and carries 1,000 rounds of 7.62 mm ammunition. Generally referred to as the C2 ("C-square" or "C-two").

LAV modified for use in a logistics role (e.g., cargo transport).

LAV modified for use in an electronic warfare role. Specific details of this variant are classified.

An unknown variant is used by at least one civilian law enforcement agency.