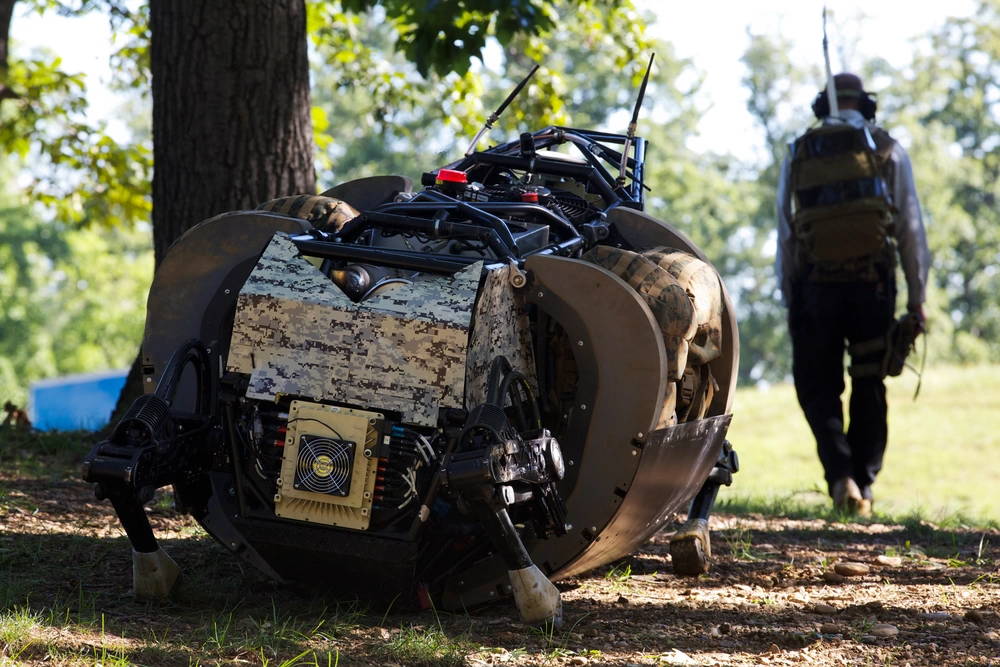 The Legged Squad Support System (LS3) is a DARPA project for a legged robot which could function autonomously as a packhorse for a squad of soldiers. Like BigDog, its quadruped predecessor, the LS3 is ruggedized for military use, with the ability to operate in hot, cold, wet, and dirty environments.

The Legged Squad Support System is to "Go where dismounts go, do what dismounts do, work among dismounts". The machine is to carry 400 pounds (180 kg) of squad equipment, sense and negotiate terrain, maneuver nimbly, and operate quietly when required.

A stereo vision system, consisting of a pair of stereo cameras mounted into the 'head' of the robot, has been integrated alongside a light detecting and ranging (LIDAR) component in order to enable it to follow a human lead and record intelligence gathered through its camera.

The initial contract for the Legged Squad Support System was awarded to Boston Dynamics on December 3, 2009. The continued evolution of the BigDog has led to the development of the LS3, also known as AlphaDog.

The contract schedule called for an operational demonstration of two units with troops in 2012.

DARPA, which has continued to support the program, carried out the first outdoor exercise on the latest variation of the LS3, in February 2012, with it successfully demonstrating its full capabilities during a planned hike encompassing tough terrain.

Following its initial success, an 18-month plan has been unveiled, which will see DARPA complete the overall development of the system and refine its key capabilities, due to start in summer 2012.

On September 10, 2012, two LS3 prototypes were demonstrated in an outdoor test. One of them had done so earlier in the year. The LS3 prototypes completed trotting and jogging mobility runs, perception visualization demonstrations, and a soldier-bounded autonomy demonstrations. They were roughly "10 times quieter" than the original platform. Other improvements included a 1 to 3 mph walk and trot over rough, rocky terrain, an easy transition to a 5 mph jog, and a 7 mph run over flat surfaces. Testing will continue approximately every quarter at military bases across the country.

In early December 2012, the LS3 performed walks through woods in Fort Pickett, Virginia. These tests were with a human controller giving voice commands to the robot to give it orders. Giving voice commands is seen as a more efficient way of controlling the LS3, because a soldier would be too peoccupied with a joystick and computer screens to focus on a mission. There are currently ten commands that the system can understand. Saying "engine on" activated it, and saying "follow tight" made it walk on the same path as the controller. Saying "follow corridor" made the LS3 generate the path most efficient for itself to follow the human operator. Others include basic orders like "stop" and "engine off." Continued work is being made to make the LS3 more mobile, like traversing a deep snow-covered hill, or avoiding gunfire and bombs on the battlefield. DARPA intends to supply a Marine company with an LS3 by 2014.