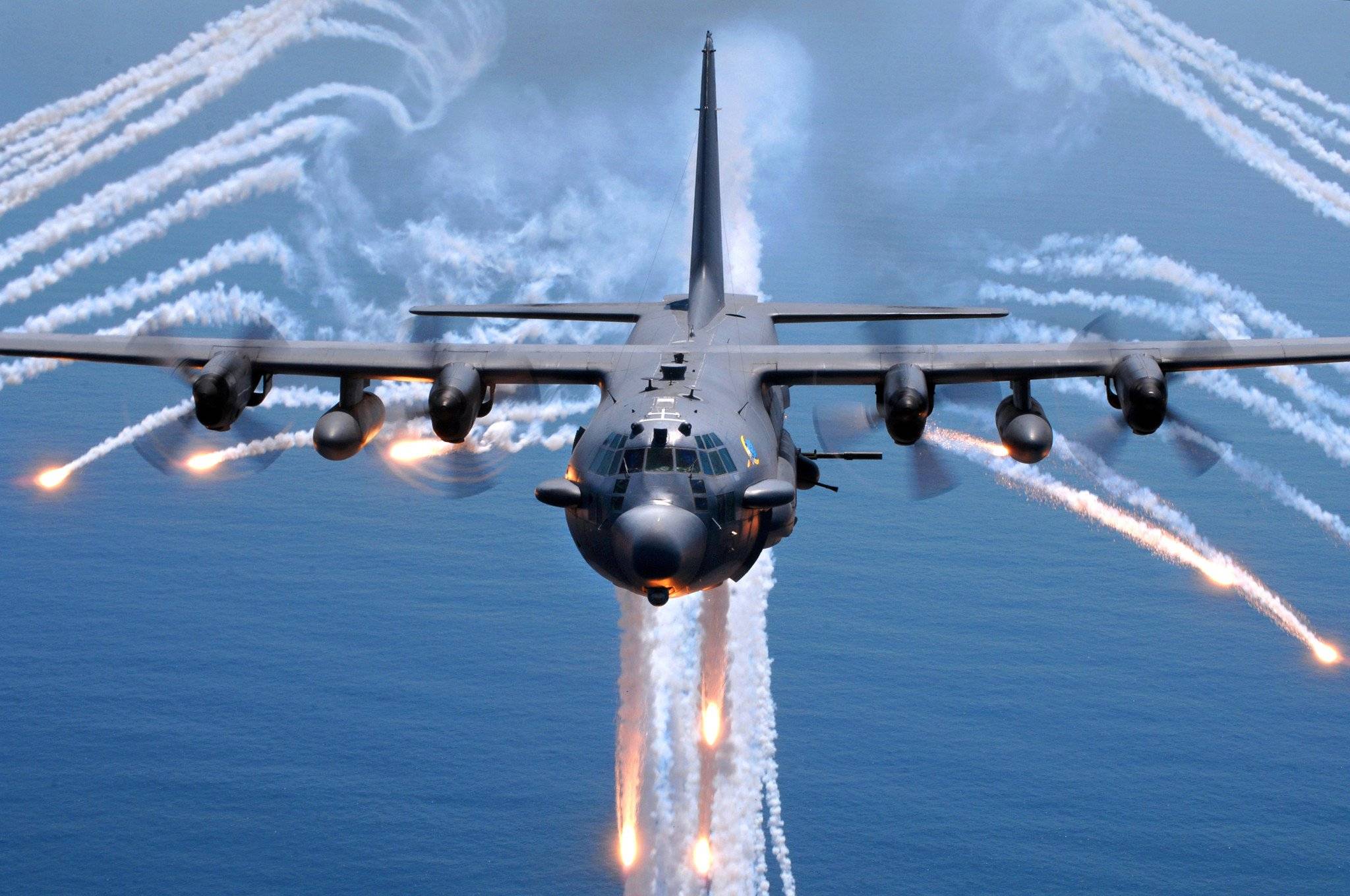 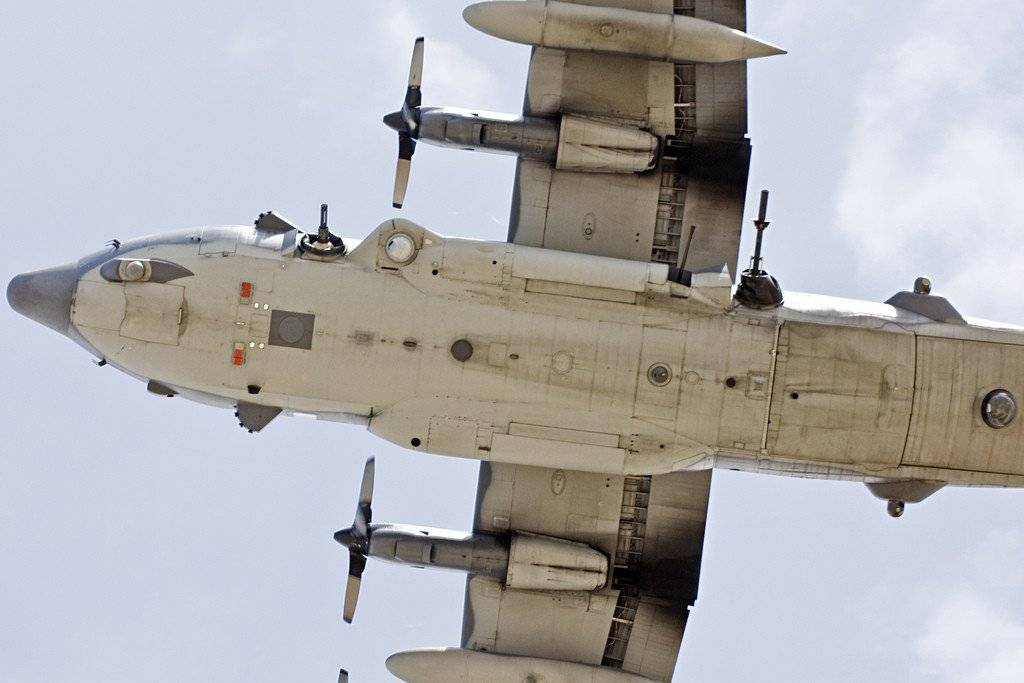 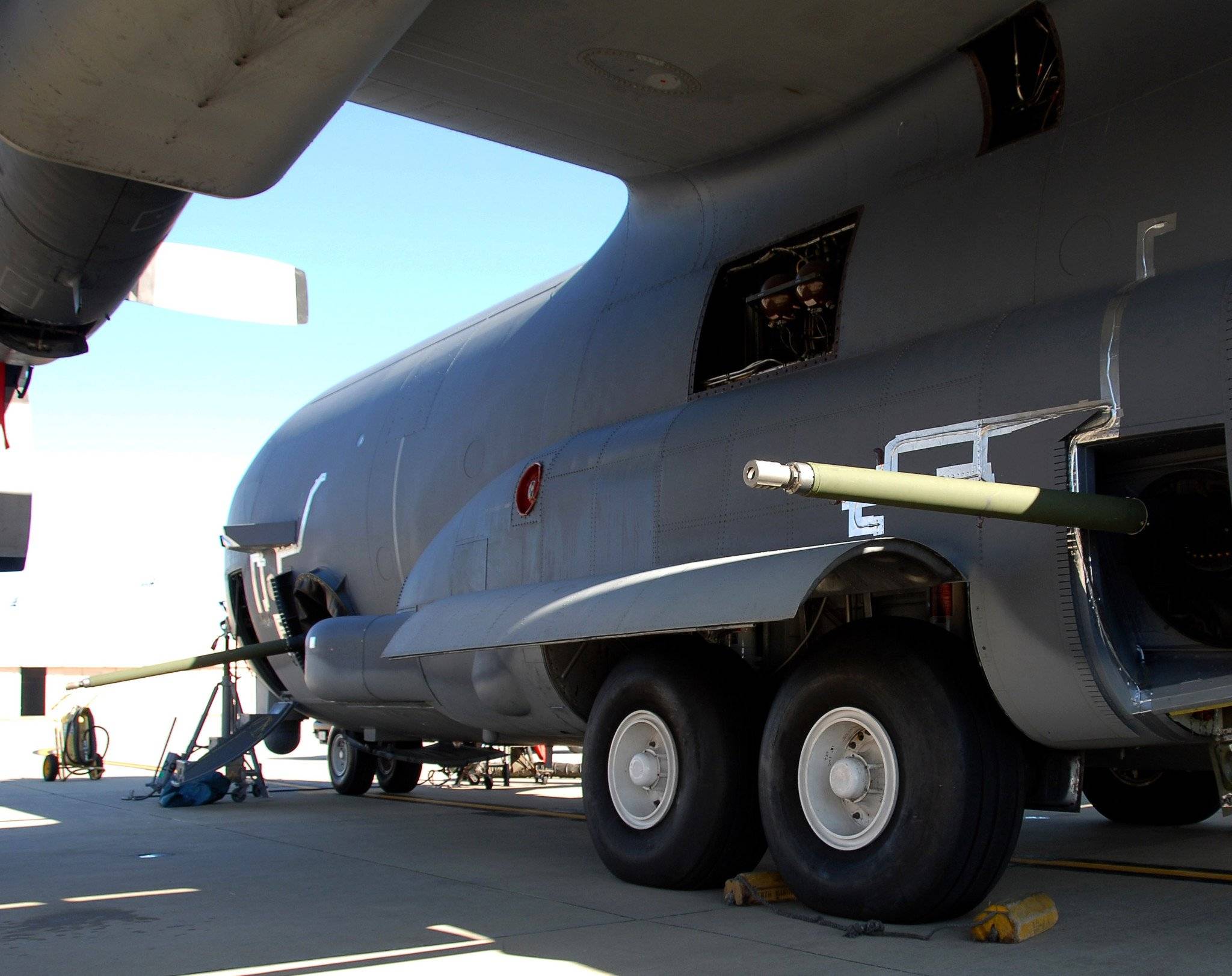 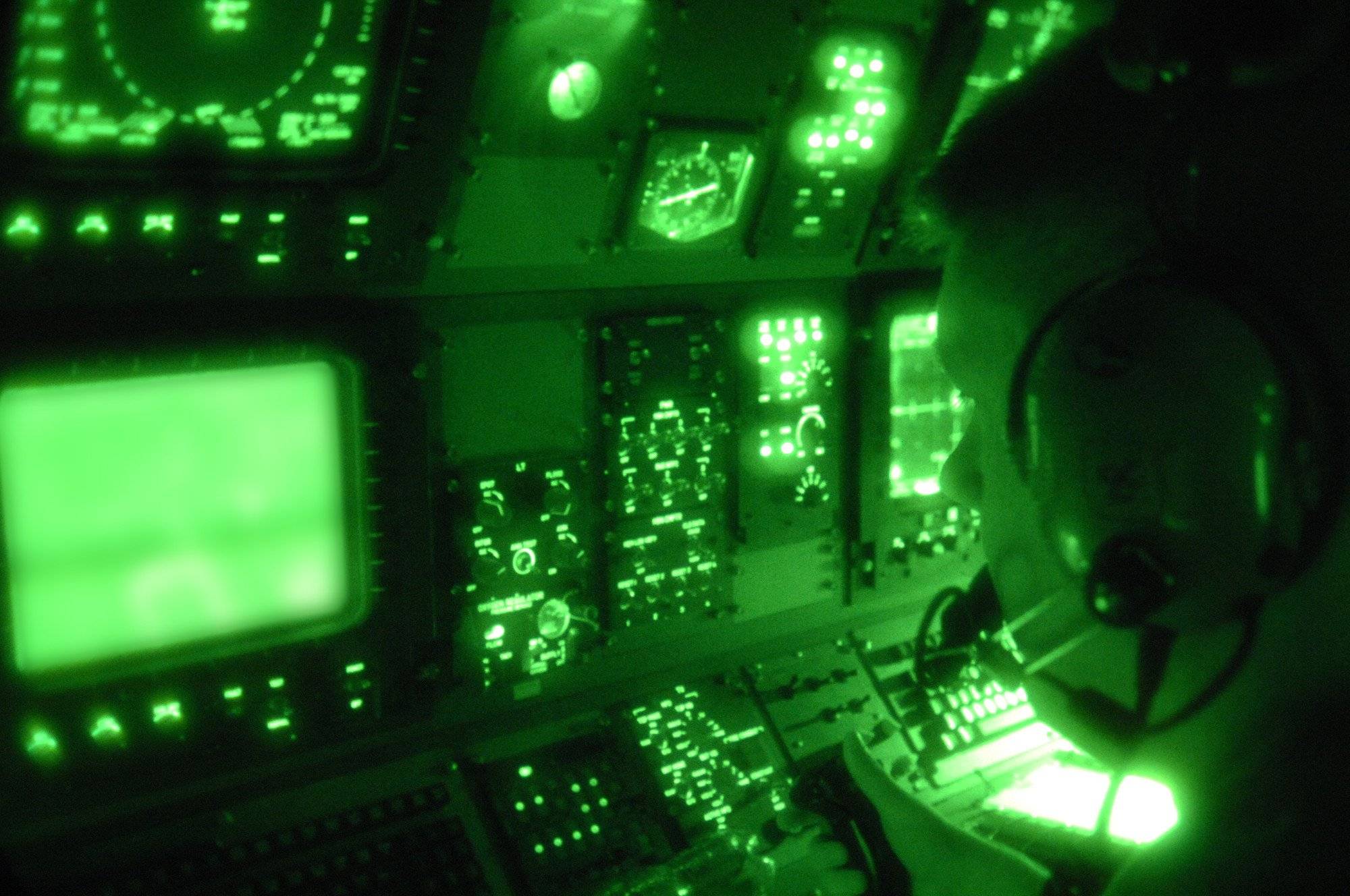 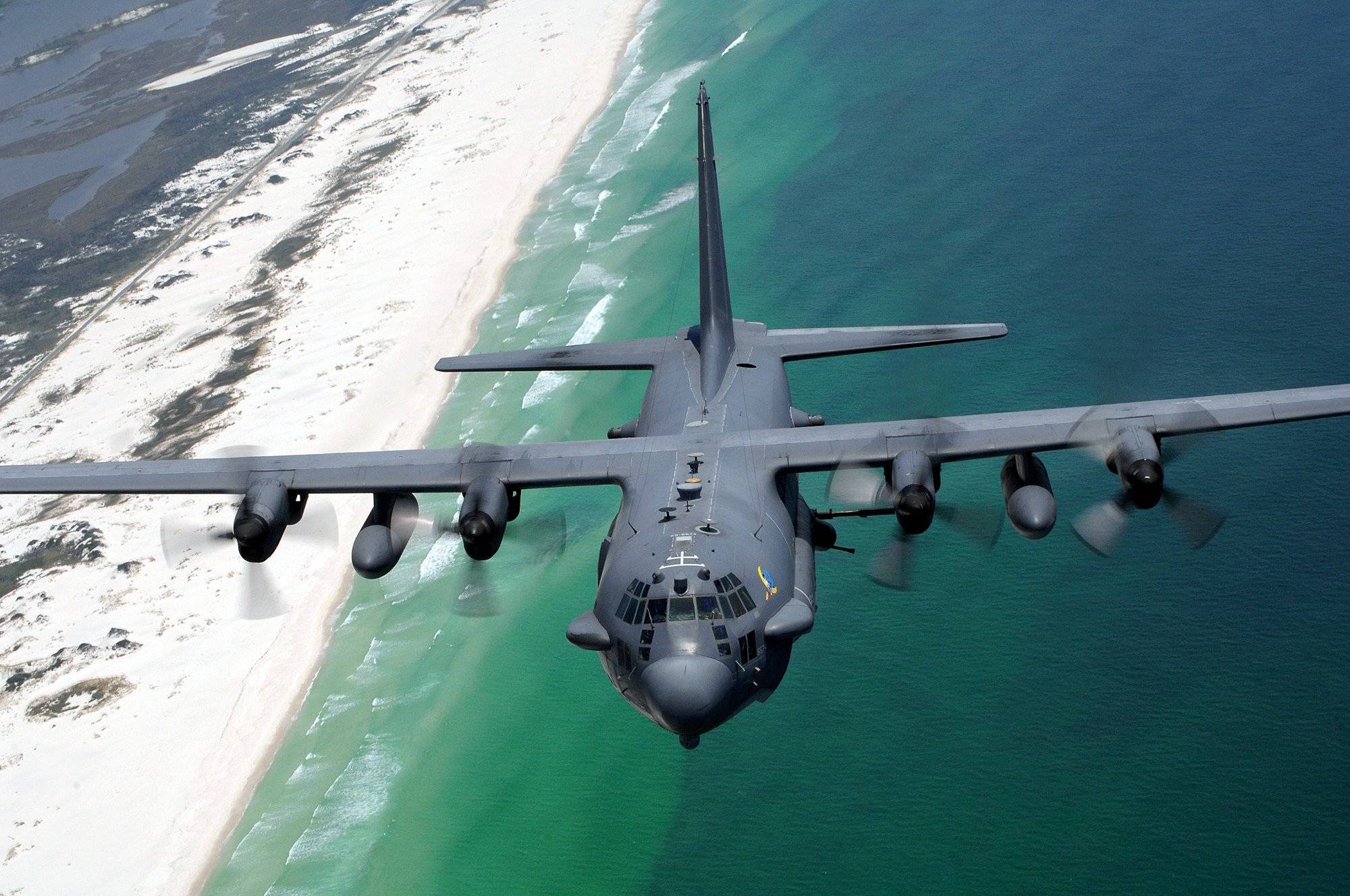 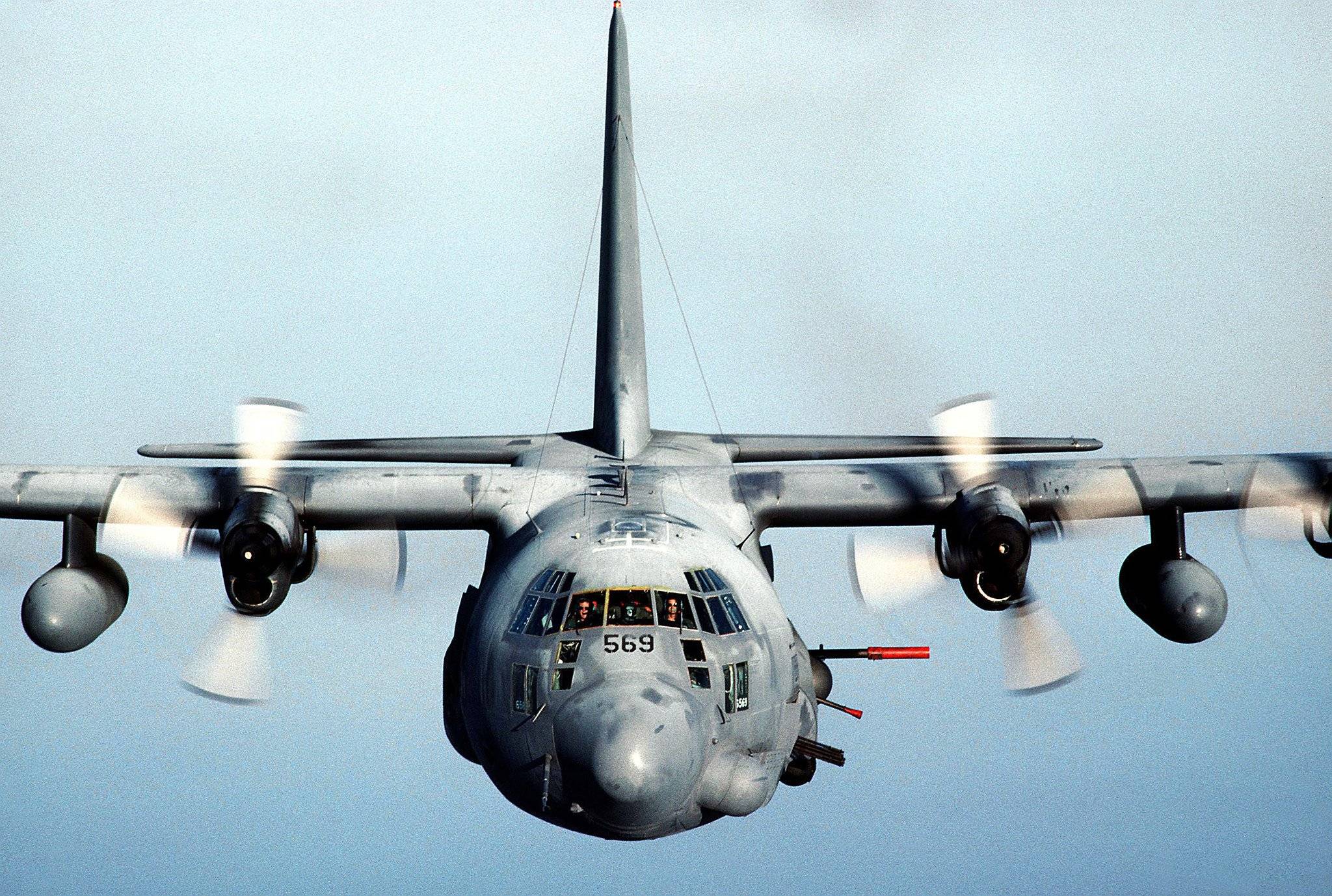 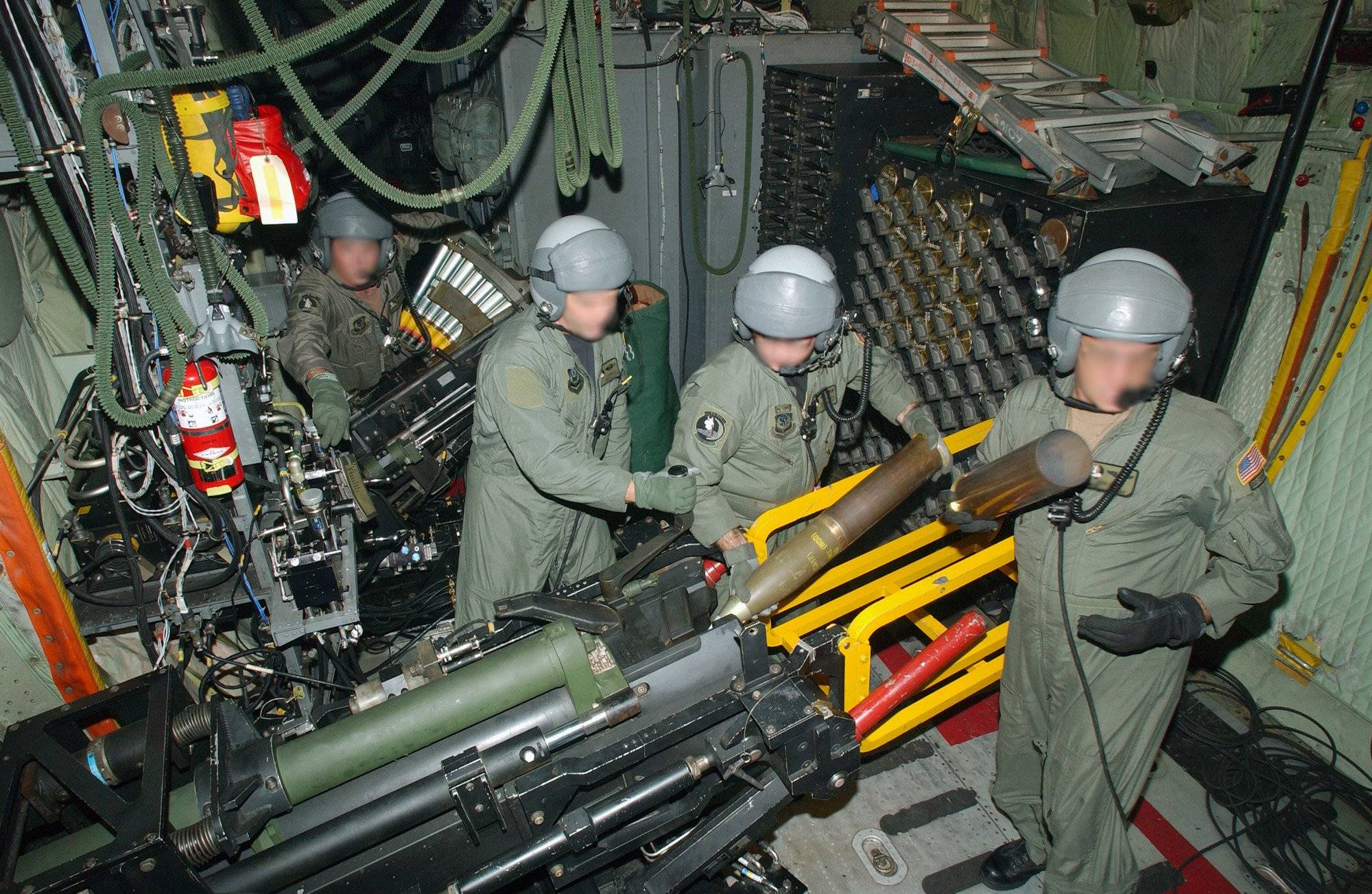 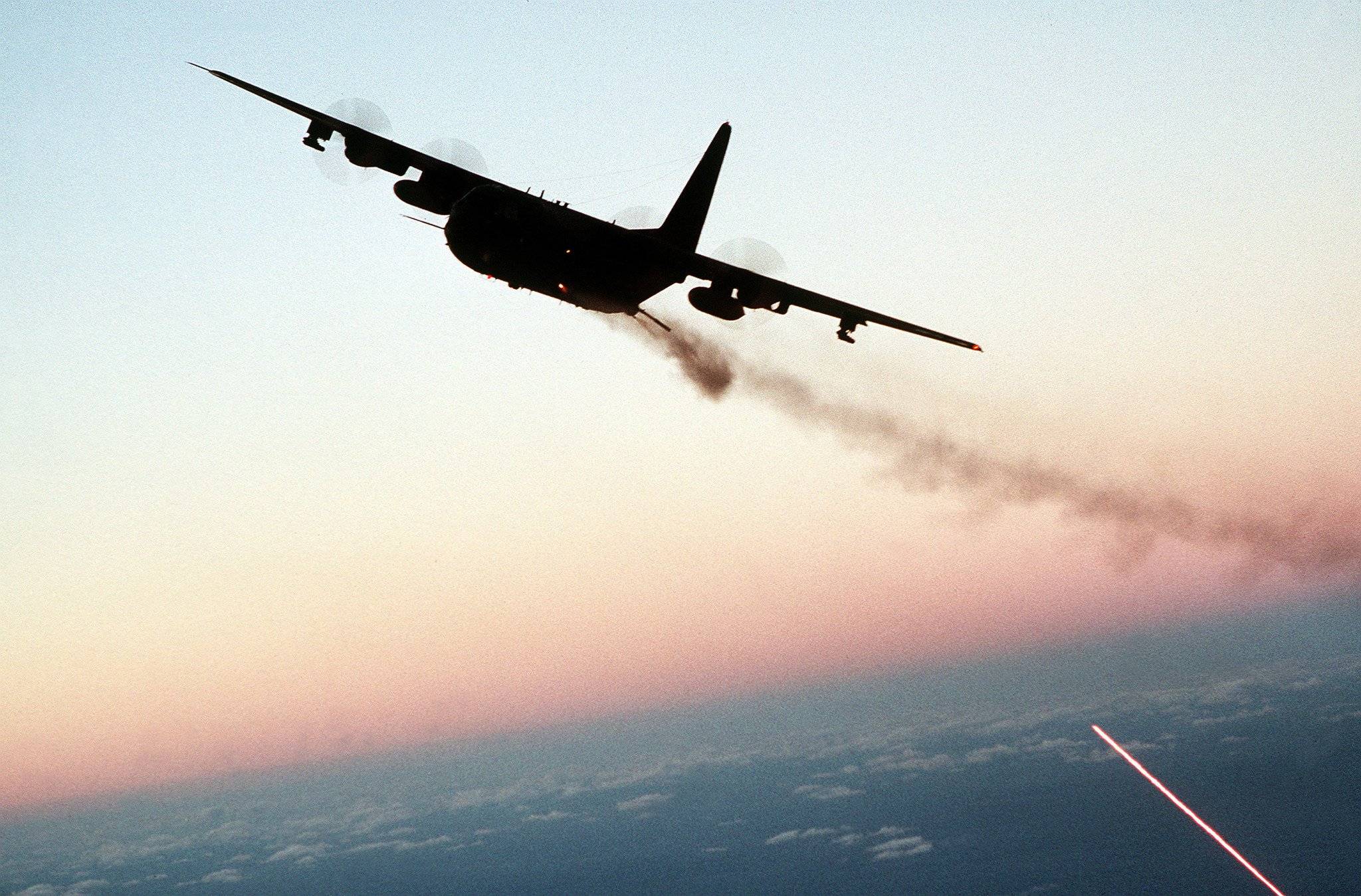 The Lockheed AC-130 gunship is a heavily-armed ground-attack aircraft variant of the C-130 Hercules transport plane. The basic airframe is manufactured by Lockheed, while Boeing is responsible for the conversion into a gunship and for aircraft support. The AC-130A Gunship II superseded the AC-47 Gunship I during the Vietnam War.

All of the weaponry aboard is mounted to fire from the left (port) side of the non-pressurised aircraft. During an attack the gunship performs a pylon turn, flying in a large circle around the target, allowing it to fire at it far longer than a conventional attack aircraft. The AC-130H "Spectre" was armed with two 20 mm M61 Vulcan cannons, one Bofors 40mm autocannon, and one 105 mm M102 cannon, although on most missions after 1994 the 20mm cannons were removed due to their incompatibility with precision targeting and to carry more 40mm and 105mm ammunition. Another reason the 20mm cannons were removed was due to insufficient slant range to target to operate outside of the shoulder launched missile (MANPADS) threat envelope. The upgraded AC-130U "Spooky" has a single 25 mm GAU-12 Equalizer in place of the Spectre's twin 20 mm cannons, an improved fire control system, and increased ammunition capacity. New AC-130J gunships based on MC-130J Combat Shadow II special operations tankers were planned as of 2012. The AC-130W is armed with one 30mm Bushmaster Cannon and can drop the AGM-176 Griffin missile.

Underside of an AC-130U Spooky

The AC-130 is a heavily-armed long-endurance aircraft carrying an array of anti-ground oriented weapons that are integrated with sophisticated sensors, navigation, and fire control systems. It is capable of delivering precision firepower or area-saturation fire over a target area over a long period of time, at night or in adverse weather. The sensor suite consists of a television sensor, infrared sensor, and radar. These sensors allow the gunship to visually or electronically identify friendly ground forces and targets in most weather conditions.

The AC-130U is equipped with the AN/APQ-180, a synthetic aperture radar for long-range target detection and identification. The gunship's navigational devices include inertial navigation systems and a Global Positioning System. The AC-130U employs technologies developed in the 1990s which allow it to attack two targets simultaneously. It has twice the munitions capacity of the AC-130H. Although the AC-130U conducts some operations in daylight, most of its combat missions are conducted at night. The AC-130H's unit cost is US$132.4 million, and the AC-130U's cost is US$190 million (fiscal 2001 dollars).

Close air support was the main mission of the AC–130 in Iraq. Night after night, at least one AC–130 was in the air to fulfill one or more air support requests (ASRs). A typical mission had the AC–130 supporting a single brigade’s ASRs followed by aerial refueling and another 2 hours with another brigade or SOF team. The use of AC-130s in places like Fallujah, urban settings where insurgents were among crowded populations of non combatants, was criticized by human rights groups. AC-130s were also used for intelligence gathering with their sophisticated long-range video, infrared and radar sensors.

AC-130 strikes were directed by special forces on known Taliban locations during the early days of the war in Afghanistan. U.S. Special Operations Forces are using the AC-130 to support its operations. The day after arriving in Afghanistan, the AC-130s attacked Taliban and Al-Qaeda forces near the city of Konduz and were directly responsible for the city's surrender the next day. On 26 November 2001, AC-130 Spectres were called in to put down a rebellion at the prison fort of Qual-a-Jinga. The 16 SOS flew missions over Mazar-E-Shariff, Konduz, Kandahar, Shkin, Asadabad, Bagram, Baghran, Tora Bora, and virtually every other part of Afghanistan. Spectre participated in countless operations within Afghanistan, performing on-call close air support and armed reconnaissance.

In March 2002, three AC-130 Spectres provided 39 crucial combat missions in support of Operation Anaconda in Afghanistan. During the intense fighting, the planes expended more than 1,300 40 mm and 1,200 105 mm rounds.

There are eight AC-130H and seventeen AC-130U aircraft in active-duty service as of July 2010.

As of September 2013, 14 MC-130W Dragon Spear aircraft have been converted to AC-130W Stinger II gunships. The Stinger gunships have been deployed to Afghanistan to replace the aging AC-130H and provide an example for the new AC-130J Ghostrider. Modifications began with crews cutting holes in the plane to make room for weapons, and adding kits and bomb bases for laser-guided munitions. Crews added a 105 mm cannon, 20 in infrared and electro-optical sensors, and the ability to carry 250-pound bombs on the wings.