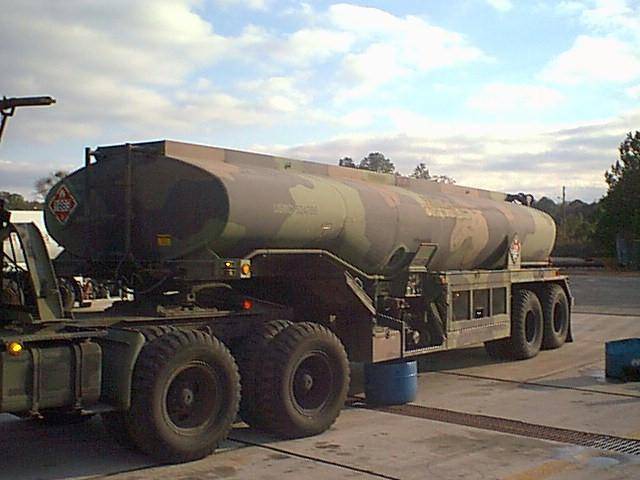 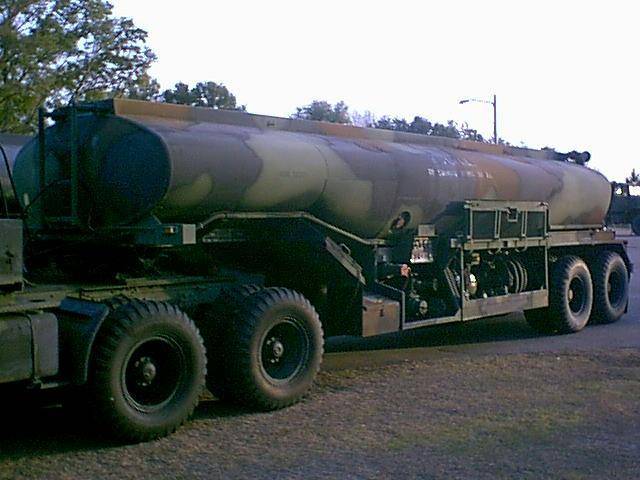 MWSS-273 M-970 sitting at Station Fuels. Photo by Firehawkv8. The M-970 Semi-Trailer Refueler is a 5,000-US-gallon (19,000 L) fuel dispensing tanker designed for under/overwing refueling of aircraft. It is equipped with a filter/separator, recirculation system and two refueling systems, one for underwing and one for overwing servicing. The tanker is designed to be towed by a 5 ton, 6x6 truck tractor or similar vehicle equipped with a fifth wheel. The M-970 can be loaded through the bottom or through the top fill openings. A ladder is provided at the front of the semitrailer for access to the top manhole, and a 4-cylinder diesel engine and pump assembly provides self load/unload capability. The body of the refueler is a 5,000-US-gallon (19,000 L), single compartment, stainless steel tank. The chassis is of welded steel construction and is equipped with full floating tandem axles and a manually operated landing gear. There has been talk of retiring the M-970, but a suitable off-road replacement has not been found. The Marine Corps also uses R-9 and R-10 tankers, but they are not capable of off road use. The M-970 is a part of the "United States Marine Corps Maintenance Center - Albany, Georgia, USA - An Integrated Enterprise Scheduling Case Study" which is working to upgrade the Semitrailer for future use.

The M-970 can be used as a stand alone fuel tanker, delivering fuel directly to aircraft on a flight line. The Semitrailer is also used in Forward Arming and Refueling Points (FARPs) delivering fuel to multiple nozzles for quick fueling operations at the front lines or beyond. This is generally used for helicopters, but can also be utilized with AV-8B Harrier II or with an Expeditionary Airfield (EAF). M-970's were used to assist in loading the bladders for the Tactical Airfield Fuel Dispensing Systems (TAFDS) in the field as well.