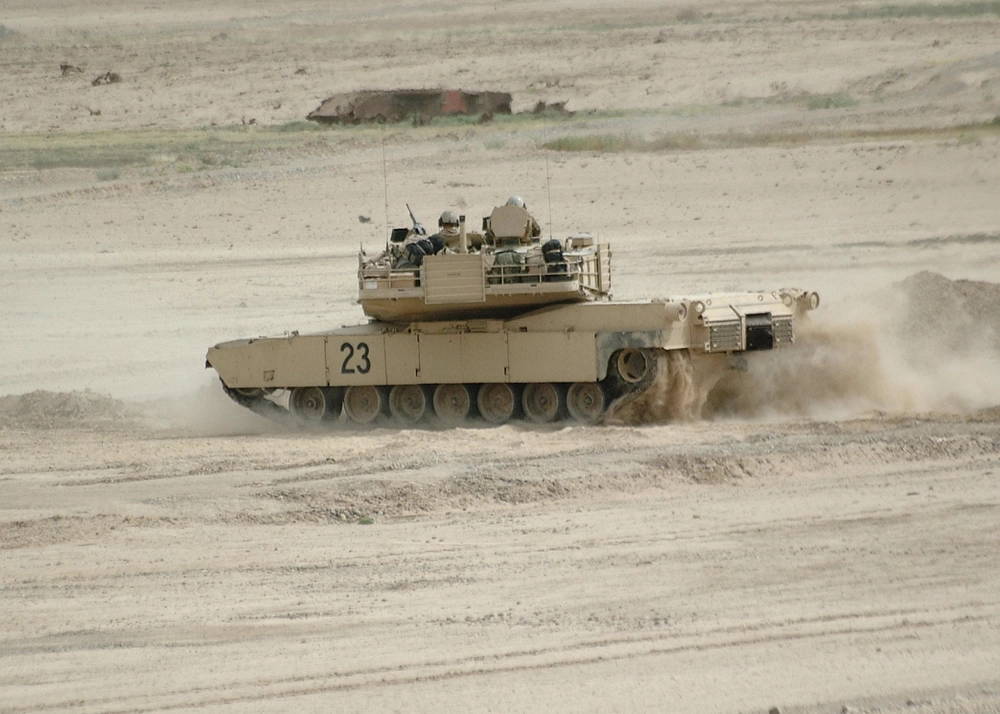 The M1 Abrams is an American third-generation main battle tank produced by the United States. It is named after General Creighton Abrams, former Army Chief of Staff and Commander of U.S. military forces in the Vietnam War from 1968 to 1972. Highly mobile, designed for modern armored ground warfare, the M1 is well armed and heavily armored. Notable features include the use of a powerful gas turbine engine (multifuel capable, usually fueled with JP8 jet fuel), the adoption of sophisticated composite armor, and separate ammunition storage in a blow-out compartment for crew safety. Weighing nearly 68 short tons (almost 62 metric tons), it is one of the heaviest main battle tanks in service.

The M1 Abrams entered U.S. service in 1980, replacing the M60 tank. It served for over a decade alongside the improved M60A3, which had entered service in 1978. The M1 remains the principal main battle tank of the United States Army and Marine Corps, and the armies of Egypt, Kuwait, Saudi Arabia, Australia, and Iraq.

Three main versions of the M1 Abrams have been deployed, the M1, M1A1, and M1A2, incorporating improved armament, protection and electronics. These improvements, as well as periodic upgrades to older tanks, have allowed this long-serving vehicle to remain in front-line service. The M1A3 is currently under development.

The M1 Abrams was developed during the Cold War as a successor to the canceled MBT-70. The M1 Abrams contract went to Chrysler Defense and was the first vehicle to adopt Chobham armor. Adaptations before the Persian Gulf War (Operations Desert Shield and Desert Storm) gave the vehicle better firepower and NBC (Nuclear, Biological and Chemical) protection. Being vastly superior to Iraqi tanks, very few M1 tanks were hit by enemy fire. Upgrades after the war improved the tank's weapons sights and fire control unit. The invasion of Iraq in 2003 destroyed Iraq's military. The subsequent insurgency exposed the tanks' vulnerability to rocket-propelled grenades and mines. These problems were partially rectified with the TUSK modification. The Marine Corps sent a company of M1A1 Abrams to Afghanistan in late 2010.

The M1A2 was a further improvement of the M1A1 with a commander's independent thermal viewer, weapon station, position navigation equipment, and a full set of controls and displays linked by a digital data bus. These upgrades also provided the M1A2 with an improved fire control system. The M1A2 System Enhancement Package (SEP) added digital maps, FBCB2 capabilities, and an improved cooling system to compensate for heat generated by the additional computer systems. The M1A2 SEP also serves as the basis for the M104 Wolverine heavy assault bridge.

Further upgrades included depleted uranium armor for all variants, a system overhaul that returns all A1s to like-new condition (M1A1 AIM), a digital enhancement package for the A1 (M1A1D), and a commonality program to standardize parts between the U.S. Army and the Marine Corps (M1A1HC).