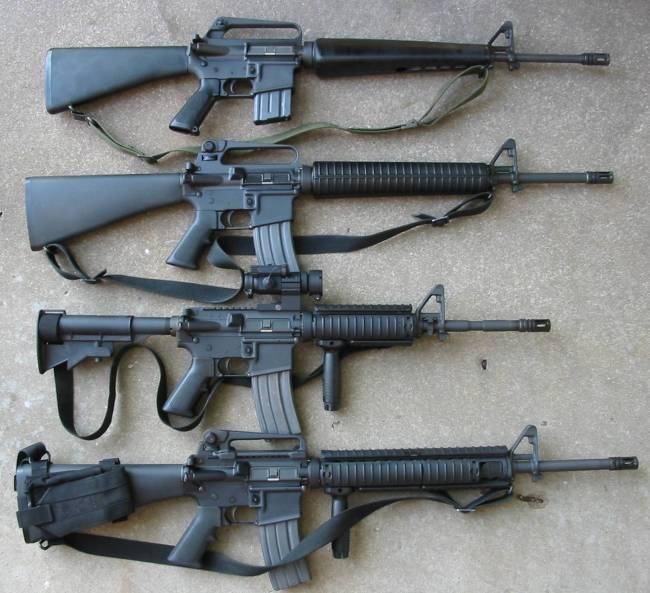 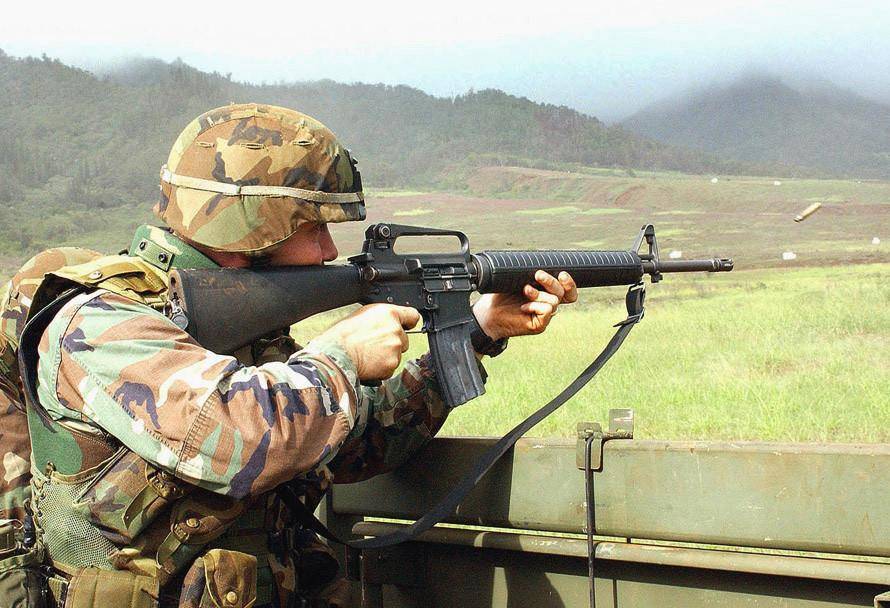 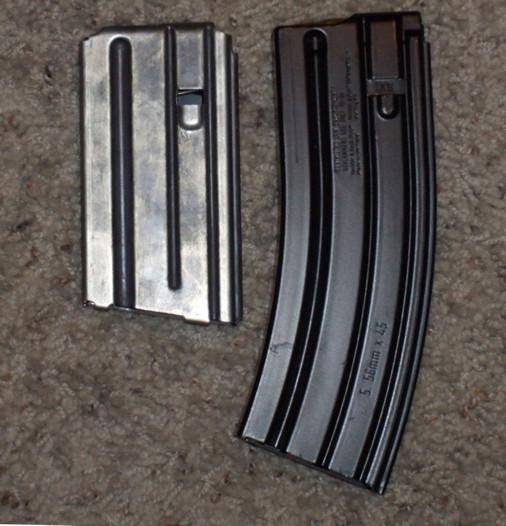 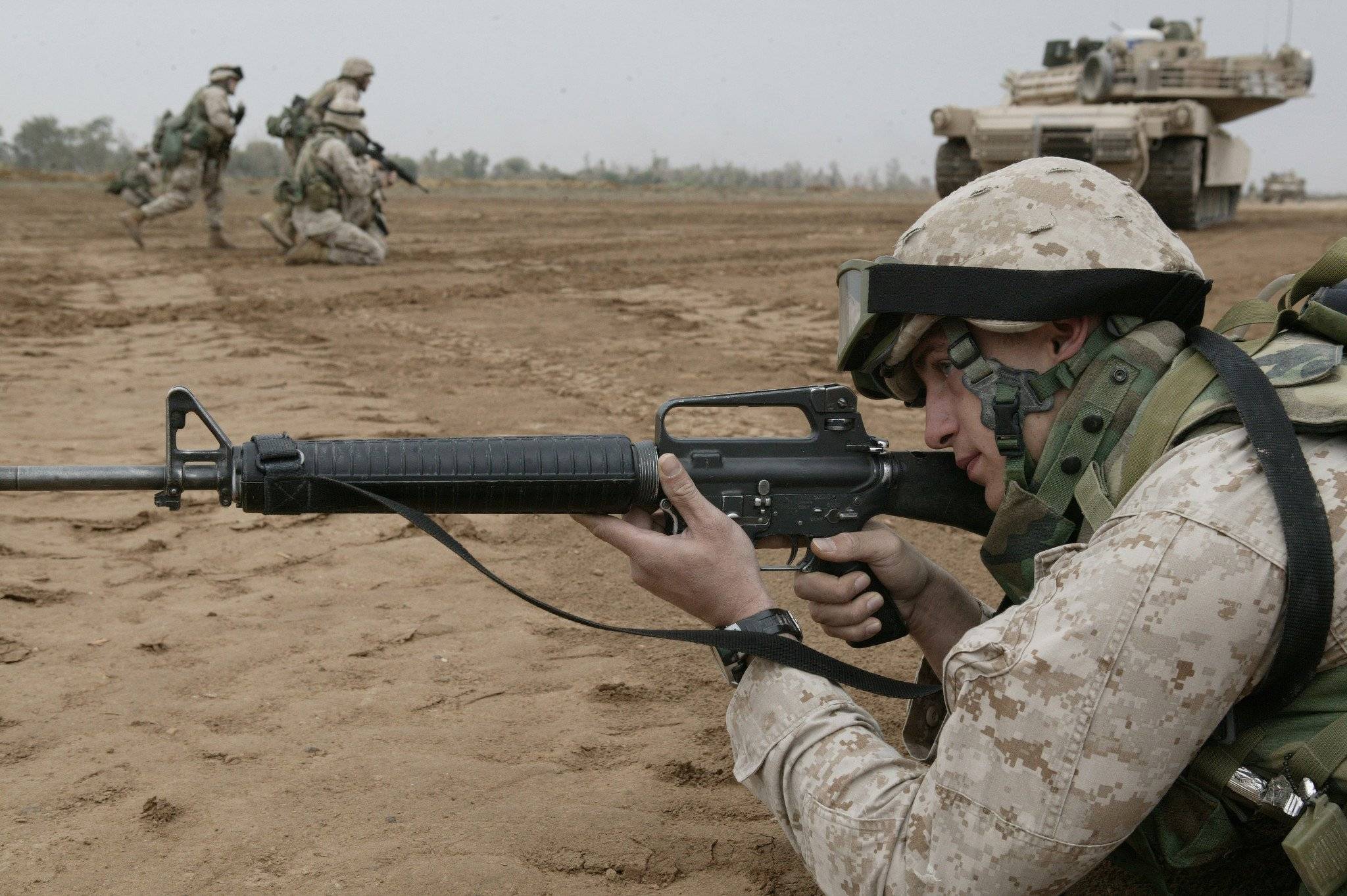 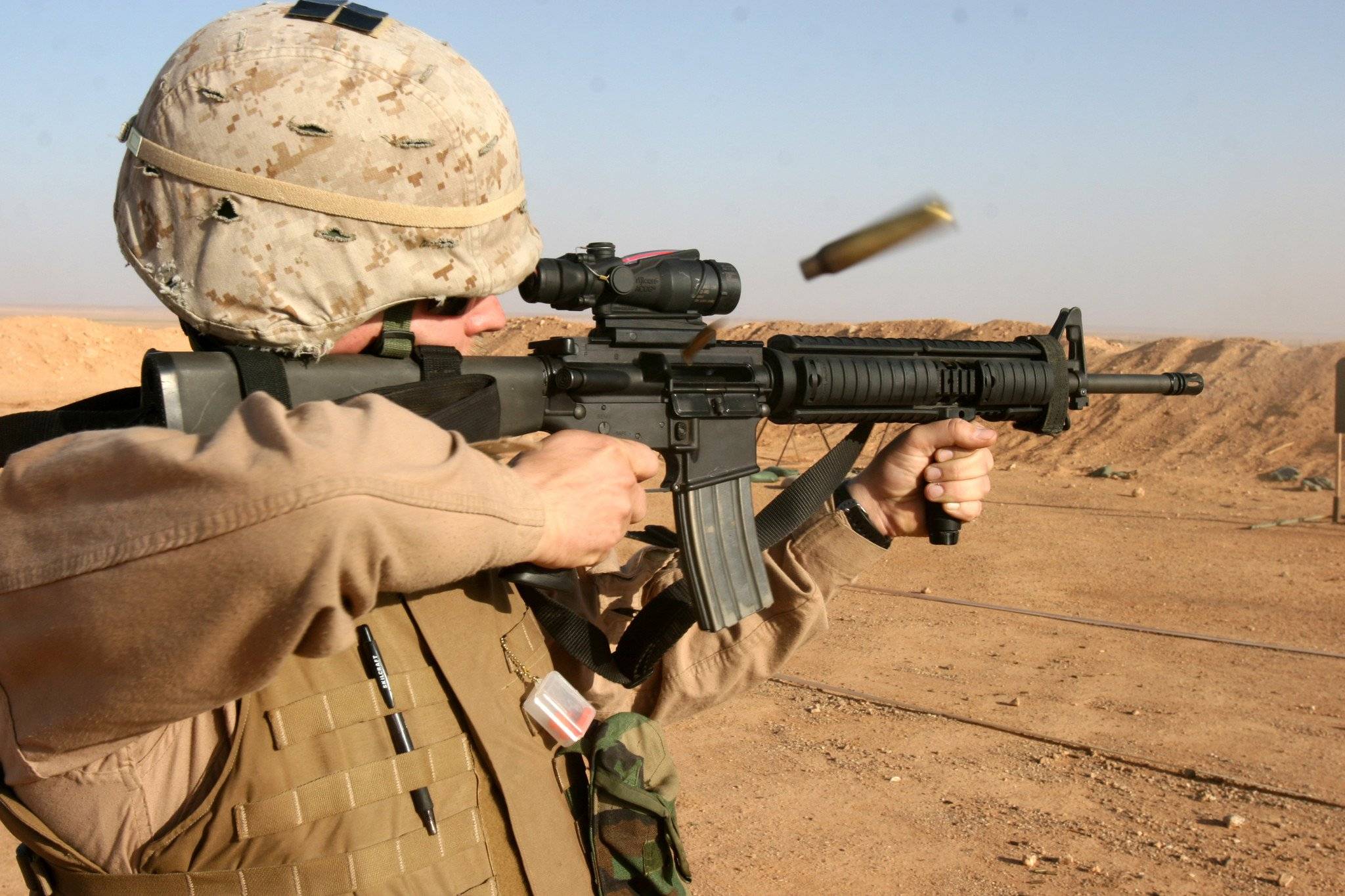 The M16 rifle, officially designated Rifle, Caliber 5.56 mm, M16, is the United States military version of the AR-15 rifle. The rifle was adapted for semi-automatic, and full-automatic fire. Colt purchased the rights to the AR-15 from ArmaLite, and currently uses that designation only for semi-automatic versions of the rifle. The M16 fires the 5.56×45mm NATO cartridge. The rifle entered United States Army service and was deployed for jungle warfare operations in South Vietnam in 1963, becoming the U.S. military's standard service rifle of the Vietnam War by 1969, replacing the M14 rifle in that role. The U.S. Army retained the M14 in CONUS, Europe, and South Korea until 1970. After the Vietnam War, the M16 rifle was modified for short round bursts, then later all three modes of fire and has been the primary service rifle of the U.S. armed forces.
The M16 has also been widely adopted by other militaries around the world. Total worldwide production of M16s has been approximately 8 million, making it the most-produced firearm of its caliber. As of 2010, the Army is supplementing the M16 in combat units with the M4 carbine, which is itself a shortened derivative of the M16A2.

The M16 is a lightweight, 5.56 mm, air-cooled, gas-operated, magazine-fed assault rifle, with a rotating bolt, actuated by direct impingement gas operation. The rifle is made of steel, 7075 aluminum alloy, composite plastics and polymer materials.
In the early 1960s, the U.S. Air Force's rifle, the M16, and the Army's XM16E1, were the first versions of the M16 rifle fielded. Soon, the U.S. Army standardized an upgrade of the XM16E1 as the M16A1 rifle, an M16 with a forward assist feature and other improvements requested by the Army. All of the early versions were chambered to fire the M193/M196 cartridges in the semi-automatic and the automatic firing modes. This occurred in the early 1960s, with the Army issuing it in late 1964. Commercial AR-15s were first issued to Special Forces troops in spring of 1964.

The M16A2 rifle entered service in the 1980s, being ordered in large scale by 1987, chambered to fire the standard NATO cartridge, the Belgian-designed M855/M856. The M16A2 is a select-fire rifle (semi-automatic fire, three-round-burst fire) incorporating design elements requested by the Marine Corps: an adjustable, windage rear-sight; a stock 5⁄8inches (15.9 mm) longer; heavier barrel; case deflector for left-hand shooters; and cylindrical handguards. The fire mode selector is on the receiver's left side.

The M16A3 rifle is an M16A2 rifle with an M16A1's fire control group (semi-automatic fire, automatic fire) that is used only by the U.S. Navy and U.S. Coast Guard. The Coast Guard replaced their upper receivers with A2 receivers in the mid 90's, but retained the full auto capability by mounting the new A2 upper receiver on the old full auto lower receiver.
The M16A4 rifle was standard issue for the United States Marine Corps in Operation Iraqi Freedom after 2004 and replaced the M16A2 in front line units. In the U.S. Army, the M16A2 rifle is being supplemented with two rifle models, the M16A4 and the M4 carbine, as the standard issue assault rifle. The M16A4 has a flat-top receiver developed for the M4 carbine, a hand-guard with four Picatinny rails for mounting a sight, laser, night vision device, forward hand-grip, removable handle, or a flashlight.
The M16 rifle is principally manufactured by Colt and Fabrique Nationale de Herstal (under a U.S. military contract since 1988 by FNH-USA; currently in production since 1991, primarily M16A2, A3, and A4), with variants made elsewhere in the world. Versions for the U.S. military have also been made by H & R Firearms General Motors Hydramatic Division and most recently by Sabre Defense. Semi-automatic versions of the AR-15 are popular recreational shooting rifles, with versions manufactured by other small and large manufacturers in the U.S.