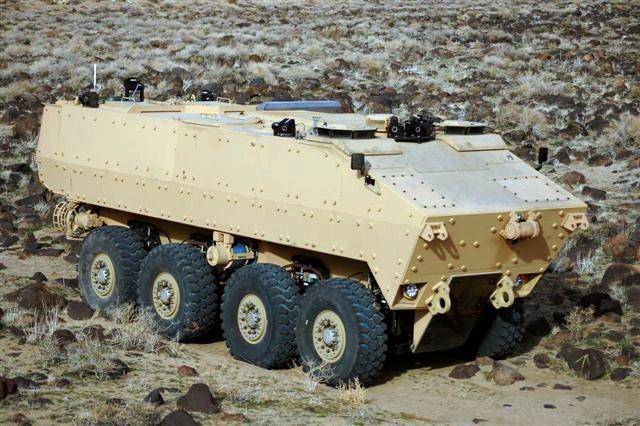 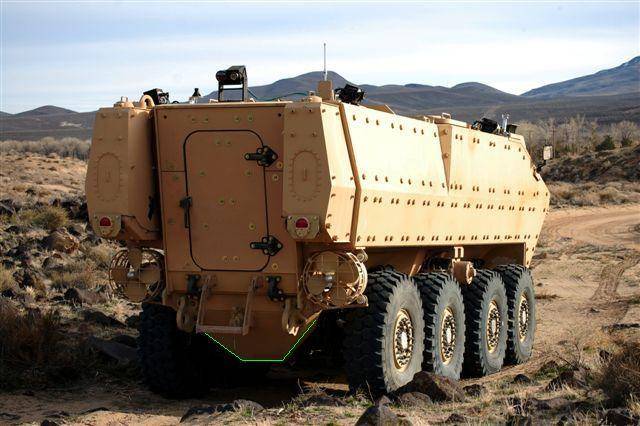 The Marine Personnel Carrier (MPC) is a wheeled armored personnel carrier under development for acquisition by the United States Marine Corps. Development has been put on hold.

The United States Marine Corps is preparing to acquire a new fleet of wheeled armored vehicles to meet the attributes and metrics of the Marine Personnel Carrier (MPC) requirement. The MPC will serve as a medium weight personnel carrier and complements the capabilities offered by the Joint Light Tactical Vehicle (JLTV – light weight personnel carrier category) and the Expeditionary Fighting Vehicle (EFV – heavy weight personnel carrier category). This triad of capabilities EFV – MPC – JLTV comprises the USMC ground mobility portfolio and the means by which expeditionary, scalable, and networked armored protected seats will be provided to the Marine Air-Ground Task Force in the future.

The Marine Personnel Carrier (MPC) will serve as a medium lift personnel carrier and complements the capabilities offered by the Joint Light Tactical Vehicle (JLTV) for light lift purposes and the Expeditionary Fighting Vehicle (EFV) for heavy lift purposes. The MPC will provide landward lift to infantry battalions. One infantry battalion can be lifted by one MPC company along with the infantry battalion's organic wheeled assets. Two MPC-Personnel Carriers can lift a reinforced Infantry squad. An Initial Capabilities Document (ICD) has already been approved and the Capability Development Document (CDD) is in development.

The MPC is a new capability that will be a multi-wheeled, armored personnel carrier designed to operate across the range of military operations but focused on an irregular warfare operating environment characterized by operations in constrained and urban terrain. Required to carry 8-9 combat loaded Marines and 2-man crew, the MPC will enable high-speed land maneuver as well as substantial ballistic protection to embarked Marines.

On 3 April 2013, the Lockheed Havoc successfully completed amphibious testing as part of its evaluation for the MPC program. Trials were conducted at Camp Pendleton with the vehicle loaded to its full combat weight. The Havoc demonstrated its resistance to water penetration and ability to negotiate all surf and wave conditions while accommodating a full complement of Marine Corps battle gear for the crew. It maintained 100 percent operational readiness throughout the test.

On 8 May 2013, BAE and Iveco successfully completed 12 days of evaluations on the Superav for the MPC program at Camp Pendleton. The evaluations included a water performance demonstrations in various sea conditions, as well as human factors and stowage capacity. The Superav exceeded all vehicle requirements, performing personnel exit drills in less than 17 seconds and showcasing advanced interior layout and compartmentalization that allowed for the stowage of more than three days of supplies without jeopardizing the survivability of the vehicle and personnel. Similar tests conducted by Iveco confirmed the vehicle's ability to be launched and recovered from ships and transition in surf zones. BAE and Iveco are now preparing for survivability demonstrations in the summer.

On 6 June 2013, General Dynamics successfully completed water performance swim and human factors testing at Camp Pendleton. The General Dynamics MPC entry is based on their LAV III APC with a Double V-hull, making it the first vehicle with the hull design to have swim capabilities. The General Dynamics MPC demonstrated swim capabilities at its fully armored combat weight, along with the required ability to carry 12 Marines and their equipment. Rapid tactical and emergency egress through the vehicle’s large roof hatches and rear ramp was also demonstrated. The vehicle was buoyant at its full combat weight, which included two days of supplies to support 12 marines. It also maneuvered safely through varying sea levels up to four feet deep and reached water speeds of over six knots.

On 18 July 2013, SAIC, along with ST Kinetics and Armatec Survivability Corporation, successfully completed two weeks of evaluations for the Terrex at Camp Pendleton. The tests included a series of water performance demonstrations in various sea conditions and an evaluation of human factors and stowage capacity. The Terrex completed all required surf transit and ocean swim maneuverability tests at its fully loaded combat weight. It demonstrated load capabilities through successful stowage of gear and supplies that Marines would require for three days of operations, with space available for additional equipment. The human factors evaluation demonstrated the spacious interior by accommodating the specified number of combat-equipped Marines and enabling rapid tactical and emergency egress through a quick-release hatch. The Terrex repeated ocean swim and maneuverability results achieved in a March 2013 rehearsal event. SAIC began ballistic and blast tests at the Nevada Automotive Test Center in May 2013, and is scheduled to complete all ballistic and mine blast demonstrations in July. The Marines are to deliver a final report in September 2013.