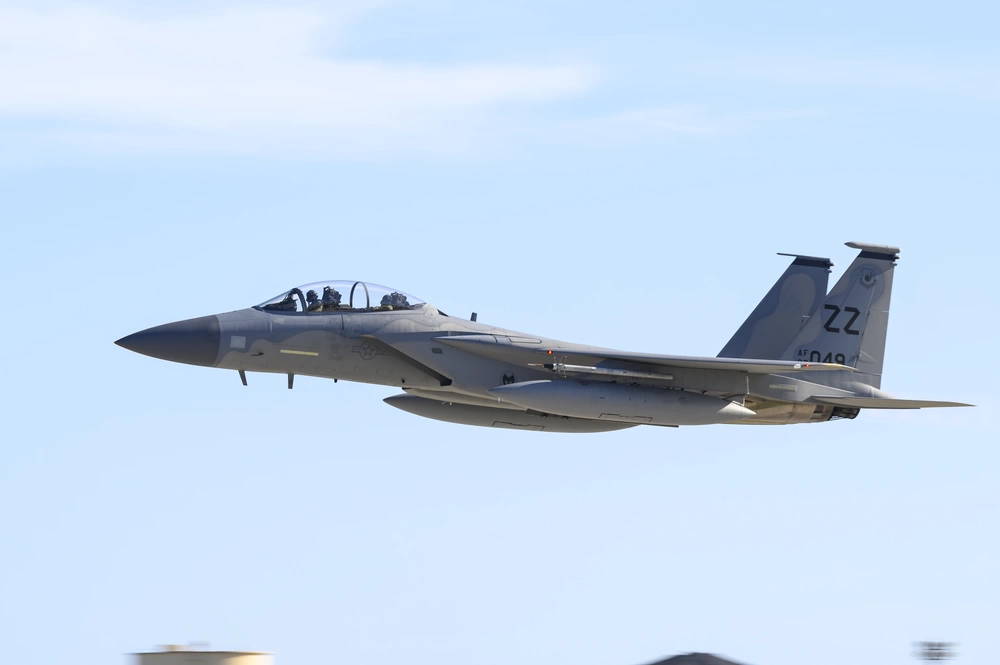 The McDonnell Douglas (now Boeing) F-15 Eagle is a twin-engine, all-weather tactical fighter designed by McDonnell Douglas to gain and maintain air superiority in aerial combat. It is considered among the most successful modern fighters, with over 100 aerial combat victories with no losses in dogfights. Following reviews of proposals, the United States Air Force selected McDonnell Douglas' design in 1967 to meet the service's need for a dedicated air superiority fighter. The Eagle first flew in July 1972, and entered service in 1976.

Since the 1970s, the Eagle has been exported to Israel, Japan, Saudi Arabia, and other nations. The F-15 was originally envisioned as a pure air superiority aircraft. Its design included a secondary ground-attack capability that was largely unused. The design proved flexible enough that an all-weather strike derivative, the F-15E Strike Eagle, was later developed, and entered service in 1989. The F-15 Eagle is expected to be in service with the U.S. Air Force past 2025. F-15 versions are still being produced for foreign users, with the F-15 production line set to end in 2019, 47 years after the type's first flight.

The McDonnell Douglas (now Boeing) F-15E Strike Eagle is an all-weather multirole fighter, derived from the McDonnell Douglas F-15 Eagle. The F-15E was designed in the 1980s for long-range, high speed interdiction without relying on escort or electronic warfare aircraft.United States Air Force (USAF) F-15E Strike Eagles can be distinguished from other U.S. Eagle variants by darker camouflage and conformal fuel tanks mounted along the engine intakes.

The Strike Eagle has been deployed for military operations in Iraq, Afghanistan, and Libya. During these operations the F-15E has carried out deep strikes against high-value targets, combat air patrols, and providing close air support for coalition troops. It has also seen action in later conflicts and has been exported to several countries.

The F-15 has an all-metal semi-monocoque fuselage with a large cantilever shoulder-mounted wing. The empennage is metal and composite construction, with twin aluminum/composite honeycomb fins with boron-composite skins, resulting in an exceptionally thin tailplane and rudders with all-moving composite horizontal tail surfaces outboard of the fins. The F-15 has a spine-mounted air brake and retractable tricycle landing gear. It is powered by two Pratt & Whitney F100 axial-flow turbofan engines with afterburners mounted side-by-side in the fuselage. The cockpit is mounted high in the forward fuselage with a one-piece windscreen and large canopy to increase visibility.

The F-15's maneuverability is derived from low wing loading (weight to wing area ratio) with a high thrust-to-weight ratio enabling the aircraft to turn tightly without losing airspeed. The F-15 can climb to 30,000 ft (10,000 m) in around 60 seconds. The thrust output of the dual engines is greater than the aircraft's weight, thus giving it the ability to accelerate in a vertical climb. The weapons and flight control systems are designed so that one person can safely and effectively perform air-to-air combat. The A and C-models are single-seat variants; these were the main air superiority versions produced. B and D-models add a second seat behind the pilot for training. E-models use the second seat for a weapon systems officer. Visibly, the F-15 has a unique feature vis a vis other modern fighter aircraft in that it does not have the distinctive turkey feather aerodynamic exhaust petals covering its engine nozzles. This is because the petal design on the F-15 was problematic and could fall off in flight; therefore they were removed, resulting in a 3% drag increase.

A wing over maneuver displays the clean lines and high-wing design of an F-15E from Elmendorf AFB, Alaska.

The heads-up display projects, through a combiner, all essential flight information gathered by the integrated avionics system. This display, visible in any light condition, provides the pilot information necessary to track and destroy an enemy aircraft without having to look down at cockpit instruments.

The F-15's versatile APG-63/70 pulse-Doppler radar system can look up at high-flying targets and down at low-flying targets without being confused by ground clutter. It can detect and track aircraft and small high-speed targets at distances beyond visual range (the maximum being 120 nautical miles (220 km) away) down to close range, and at altitudes down to treetop level. The radar feeds target information into the central computer for effective weapons delivery. The capability of locking onto targets as far as 50 nautical miles (90 km) with an AIM-120 AMRAAM missile enables true beyond visual range (BVR) engagement of targets. For close-in dogfights, the radar automatically acquires enemy aircraft, and this information is projected on the heads-up display. The F-15's electronic warfare system provides both threat warning and automatic countermeasures against selected threats.

M61 Vulcan mounted on the side of right engine intake

A variety of air-to-air weaponry can be carried by the F-15. An automated weapon system enables the pilot to perform aerial combat safely and effectively, using the head-up display and the avionics and weapons controls located on the engine throttles or control stick. When the pilot changes from one weapon system to another, visual guidance for the required weapon automatically appears on the head-up display.

Low-drag conformal fuel tanks (CFTs) were developed for the F-15C and D models. They can be attached to the sides of the engine air intake trunks under each wing and are designed to the same load factors and airspeed limits as the basic aircraft. They degrade performance by increasing drag and cannot be jettisoned in-flight (unlike conventional external tanks). Each conformal fuel tank can hold 750 U.S. gallons(2,840 L) of fuel. These tanks increase range and reduce the need for in-flight refueling. All external stations for munitions remain available with the tanks in use. Moreover, Sparrow or AMRAAM missiles can be attached to the corners of the conformal fuel tanks. The 57 FIS based at Keflavik NAS, Iceland was the only C-model squadron to use CFTs on a regular basis due to its extended operations over the North Atlantic. With the closure of the 57 FIS, the F-15E is the only variant to carry them on a routine basis. CFTs have also been sold to Israel and Saudi Arabia. Front view of an F-15C. Note the conformal FAST PACK fuel tanks on the trailers