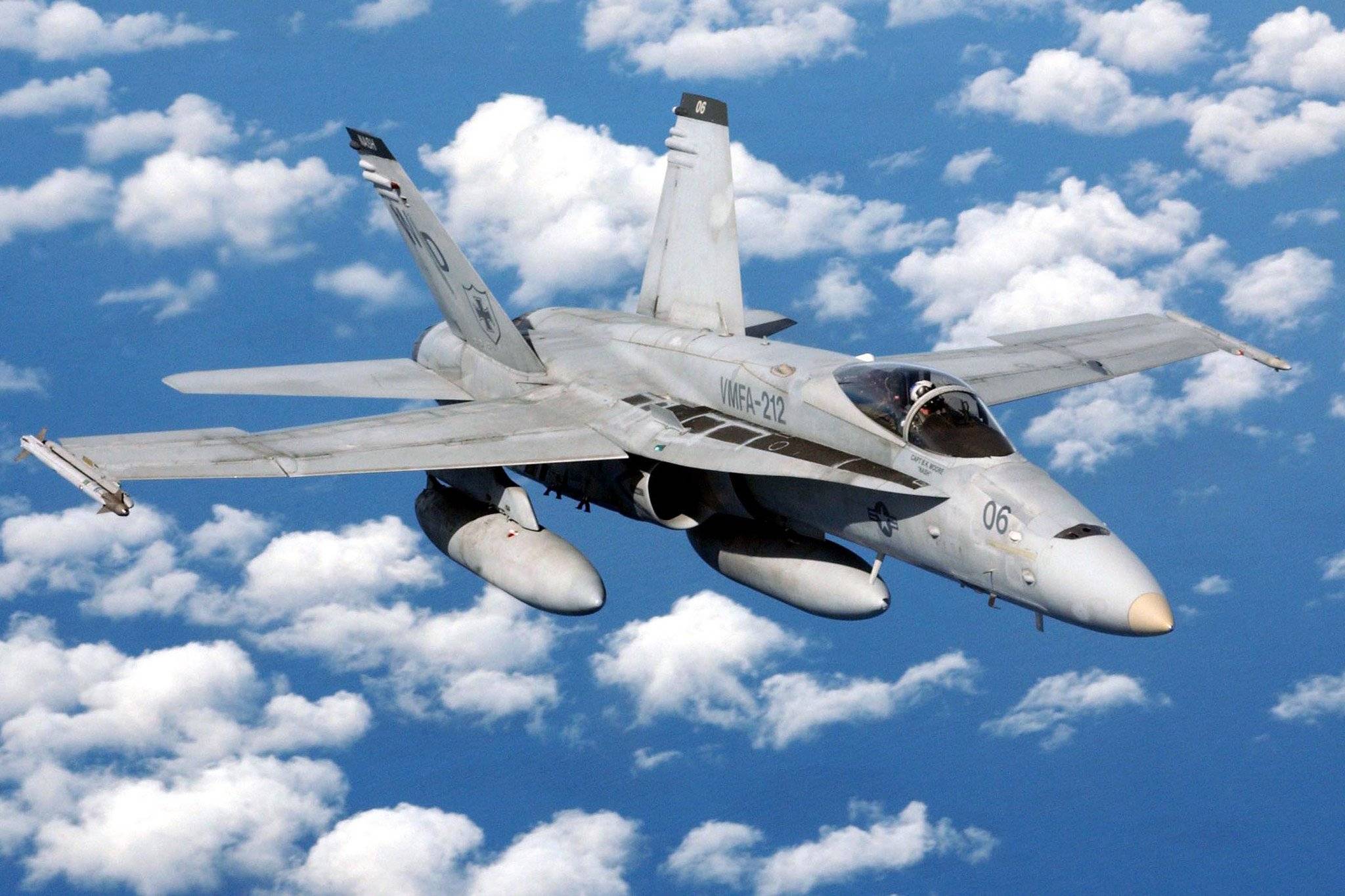 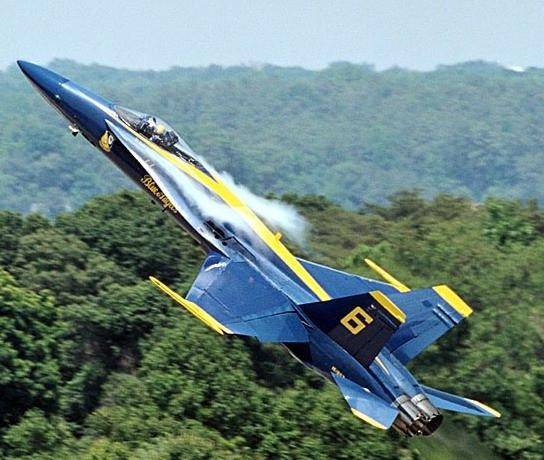 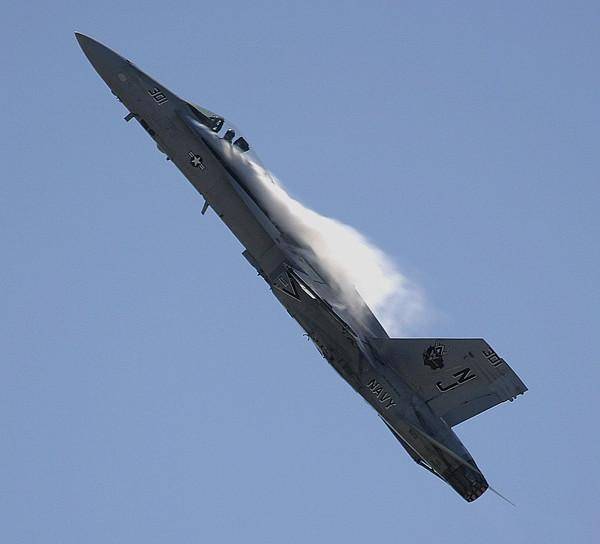 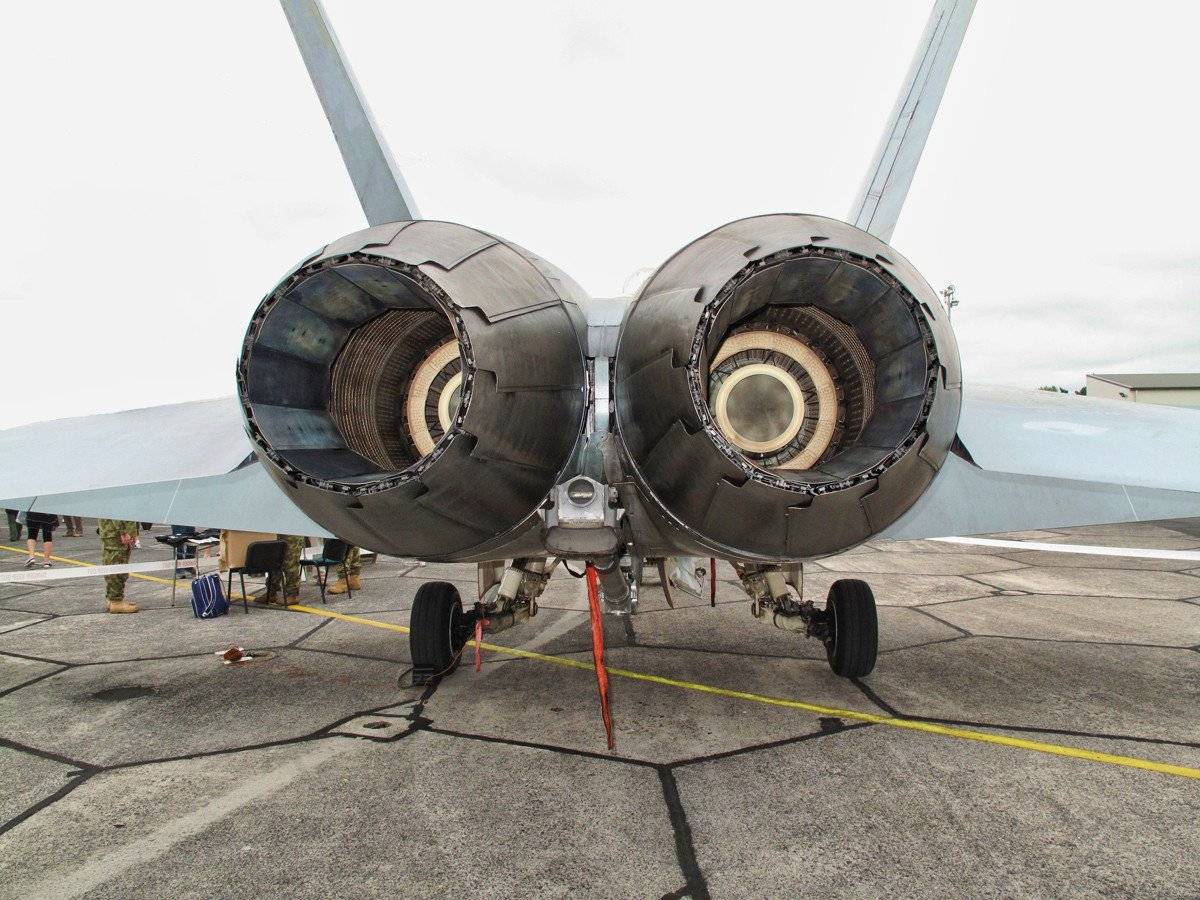 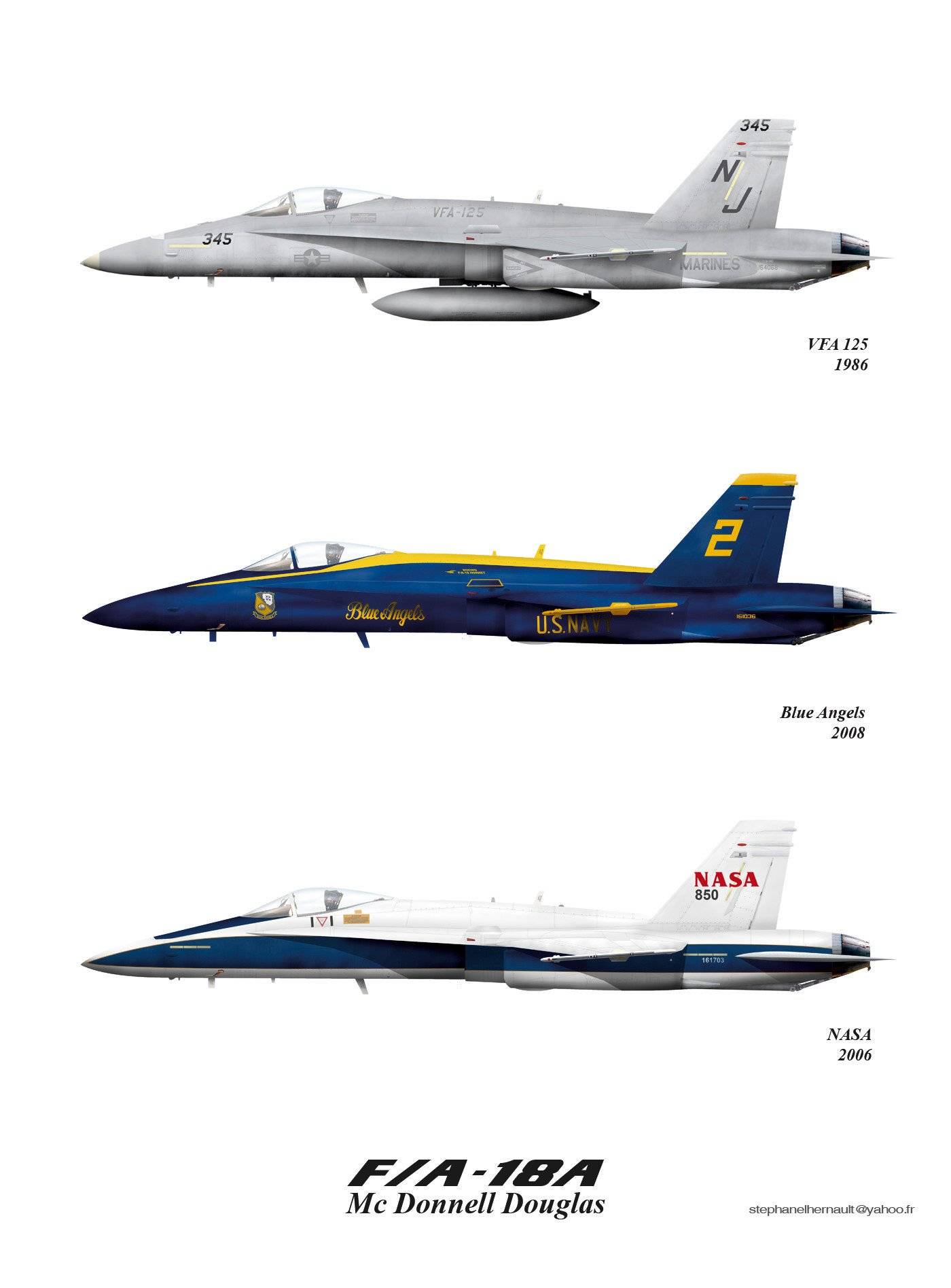 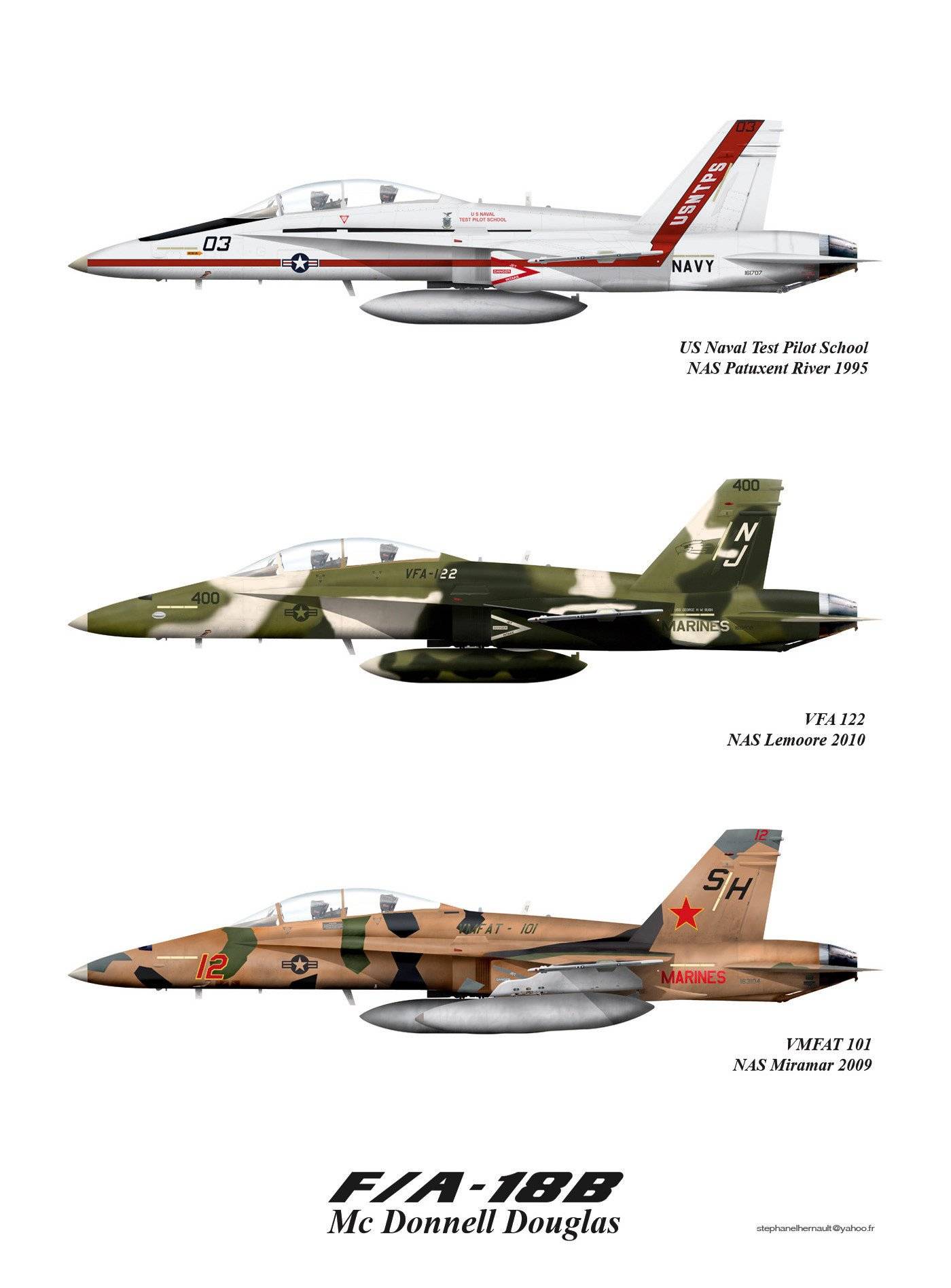 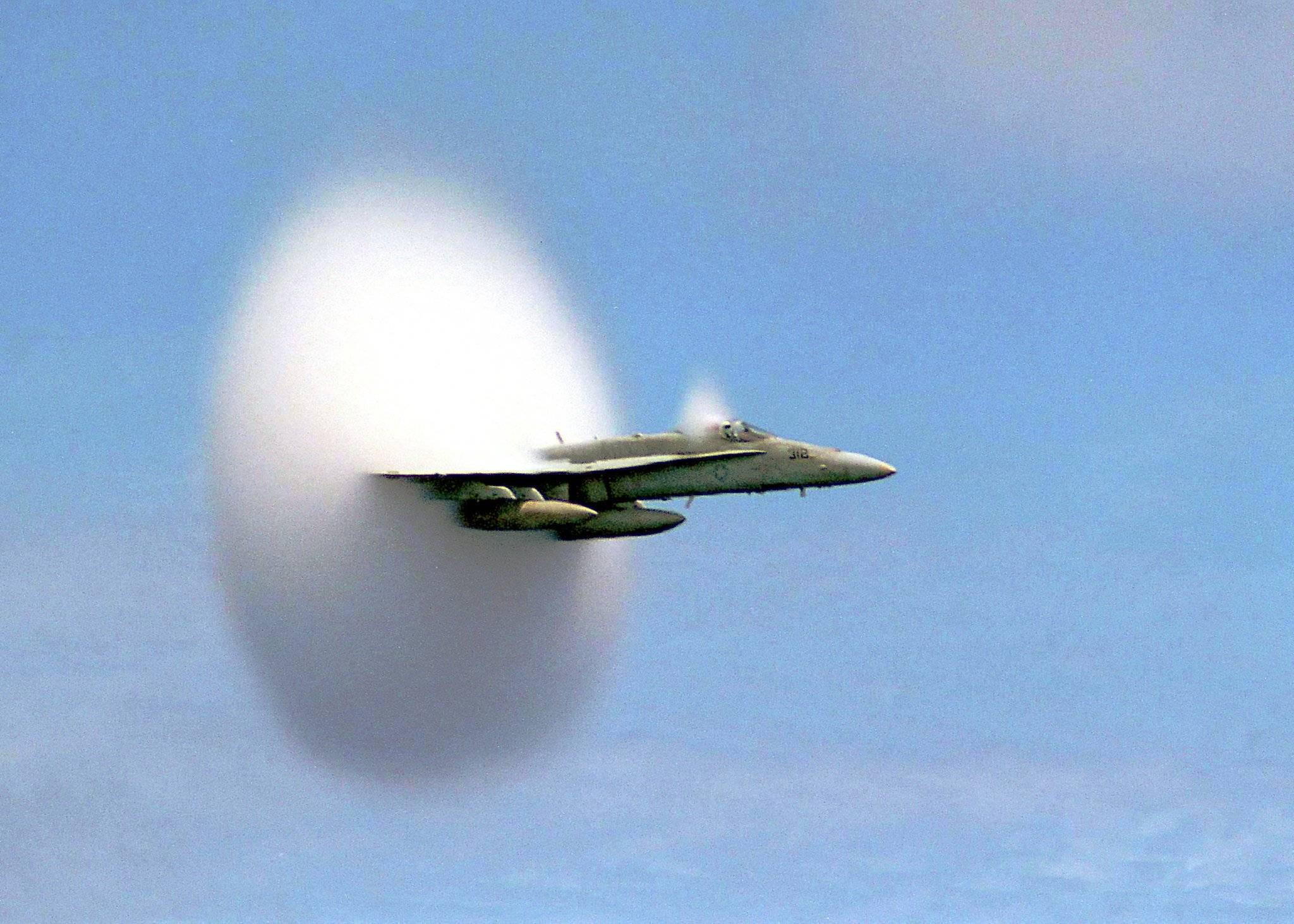 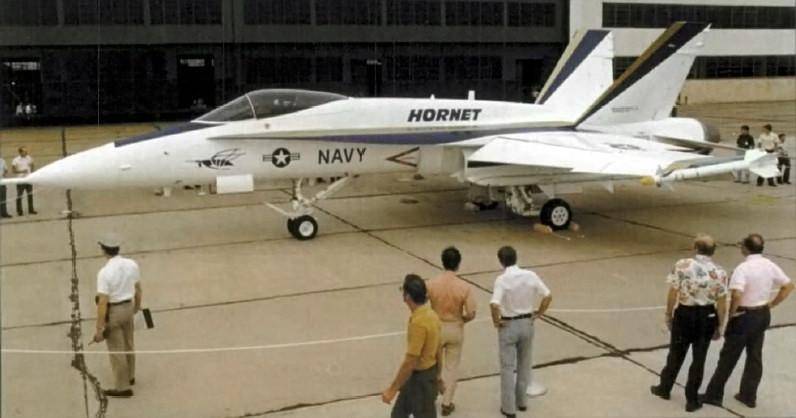 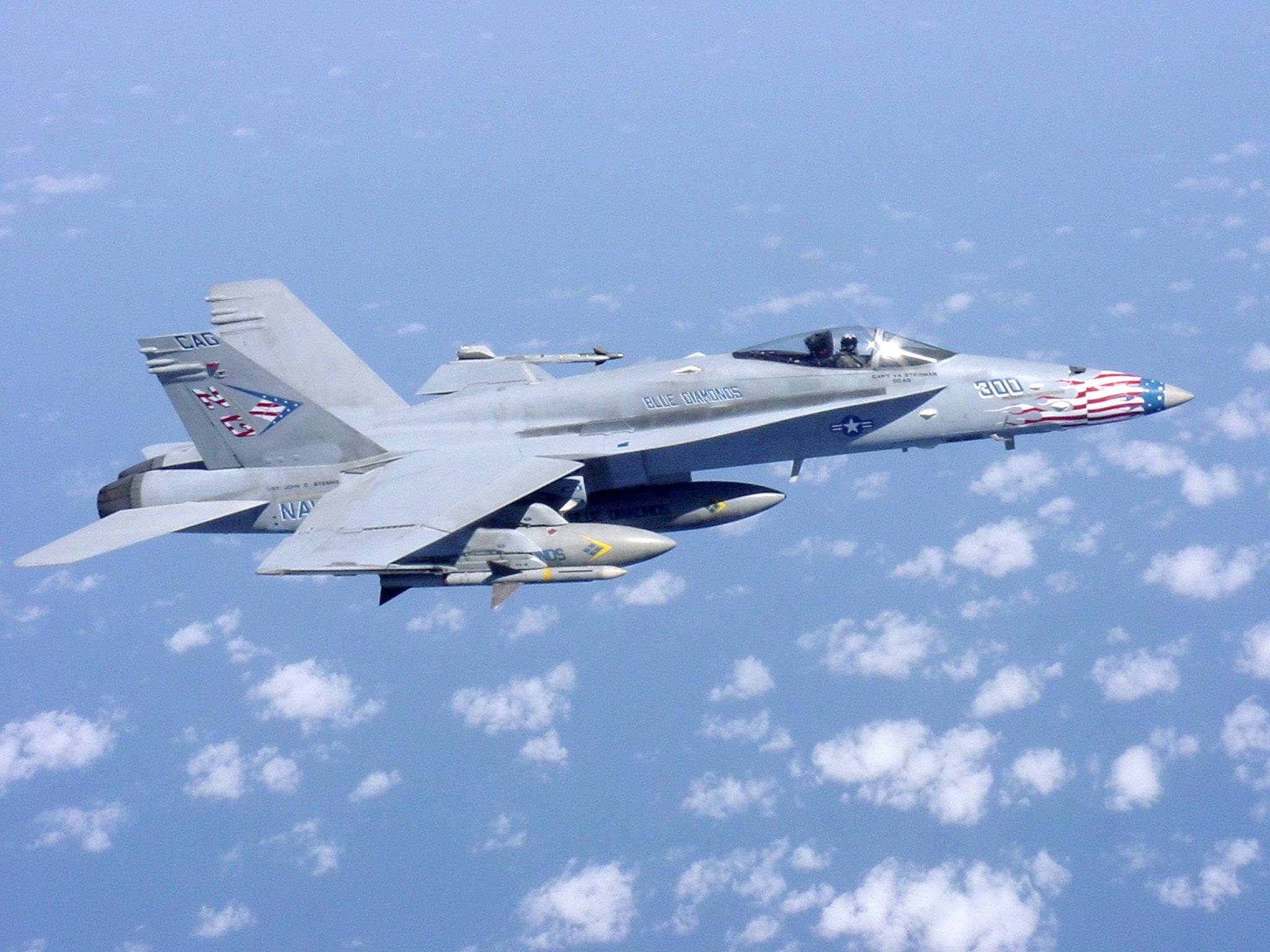 The McDonnell Douglas (now Boeing) F/A-18 Hornet is a twin-engine supersonic, all-weather carrier-capable multirole fighter jet, designed to dogfight and attack ground targets (F/A designation for Fighter/Attack). Designed by McDonnell Douglas and Northrop, the F/A-18 was derived from the latter's YF-17 in the 1970s for use by the United States Navy and Marine Corps. The Hornet is also used by the air forces of several other nations. The U.S. Navy's Flight Demonstration Squadron, the Blue Angels has used the Hornet since 1986.

The F/A-18 has a top speed of Mach 1.8. It can carry a wide variety of bombs and missiles, including air-to-air and air-to-ground, supplemented by the 20 mm M61 Vulcan cannon. It is powered by two General Electric F404 turbofan engines, which give the aircraft a high thrust-to-weight ratio. The F/A-18 has excellent aerodynamic characteristics, primarily attributed to its leading edge extensions(LEX). The fighter's primary missions are fighter escort, fleet air defense, Suppression of Enemy Air Defenses (SEAD), air interdiction,close air support and aerial reconnaissance. Its versatility and reliability have proven it to be a valuable carrier asset, though it has been criticized for its lack of range and payload compared to its earlier contemporaries, such as the Grumman F-14 Tomcat in the fighter and strike fighter role, and the Grumman A-6 Intruder and LTV A-7 Corsair II in the attack role.

The F/A-18 Hornet provided the baseline design for the Boeing F/A-18E/F Super Hornet, a larger, evolutionary redesign of the F/A-18. Compared to the Hornet, the Super Hornet is larger, is heavier, and has improved range and payload. The F/A-18E/F was originally proposed as an alternative to an all-new aircraft to replace existing dedicated attack aircraft such as the A-6. The larger variant was also directed to replace the aging F-14 Tomcat, thus serving a complementary role with Hornets in the U.S. Navy, and serving a wider range of roles including refueling tanker. The Boeing EA-18G Growler electronic jamming platform was also developed from the F/A-18E/F Super Hornet. A Hornet performing a high-g pull-up during an air show. The high angle of attack causes powerful vortices to form at the leading edge extensions.

The F/A-18 is a twin engine, mid-wing, multi-mission tactical aircraft. It is highly maneuverable, owing to its good thrust to weight ratio, digital fly-by-wire control system, and leading edge extensions (LEX). The LEX allow the Hornet to remain controllable at high angles of attack. The wing is a trapezoidal shape with 20-degree sweepback on the leading edge and a straight trailing edge. The wing has full-span leading edge flaps and the trailing edge has single-slotted flaps and ailerons over the entire span.

The Hornet was among the first aircraft to heavily use multi-function displays, which at the switch of a button allow a pilot to perform either fighter or attack roles or both. This "force multiplier" ability gives the operational commander more flexibility to employ tactical aircraft in a fast-changing battle scenario. It was the first Navy aircraft to incorporate a digital multiplex avionics bus, enabling easy upgrades.

The Hornet is also notable for having been designed to reduce maintenance, and as a result has required far less downtime than its heavier counterparts, the F-14 Tomcat and the A-6 Intruder. Its mean time between failure is three times greater than any other Navy strike aircraft, and requires half the maintenance time. Its General Electric F404 engines were also innovative in that they were designed with operability, reliability and maintainability first. The engine, while unexceptional in rated performance, demonstrates exceptional robustness under various conditions and is resistant to stall and flameout. The F404 engine connects to the airframe at only 10 points and can be replaced without special equipment; a four person team can remove the engine within 20 minutes. The engine air inlets of the Hornet, like that of the F-16, are of a simpler "fixed" design, while those of the F-4, F-14, and F-15 have variable geometry or variable ramp air inlets. This is a speed limiting factor in the Hornet design. Instead, the Hornet uses bleed air vents on the inboard surface of the engine air intake ducts to slow and reduce the amount of air reaching the engine. While not as effective as variable geometry, the bleed air technique functions well enough to achieve near Mach 2 speeds, which is within the designed mission requirements.

A 1989 USMC study found that single seat fighters were well suited to air to air combat missions while dual seat fighters were favored for complex strike missions against heavy air and ground defenses in adverse weather. The question being not so much as to whether a second pair of eyes would be useful, but as to having the second crewman sit in the same fighter or in a second fighter. Single-seat fighters that lacked wingmen were shown to be especially vulnerable.