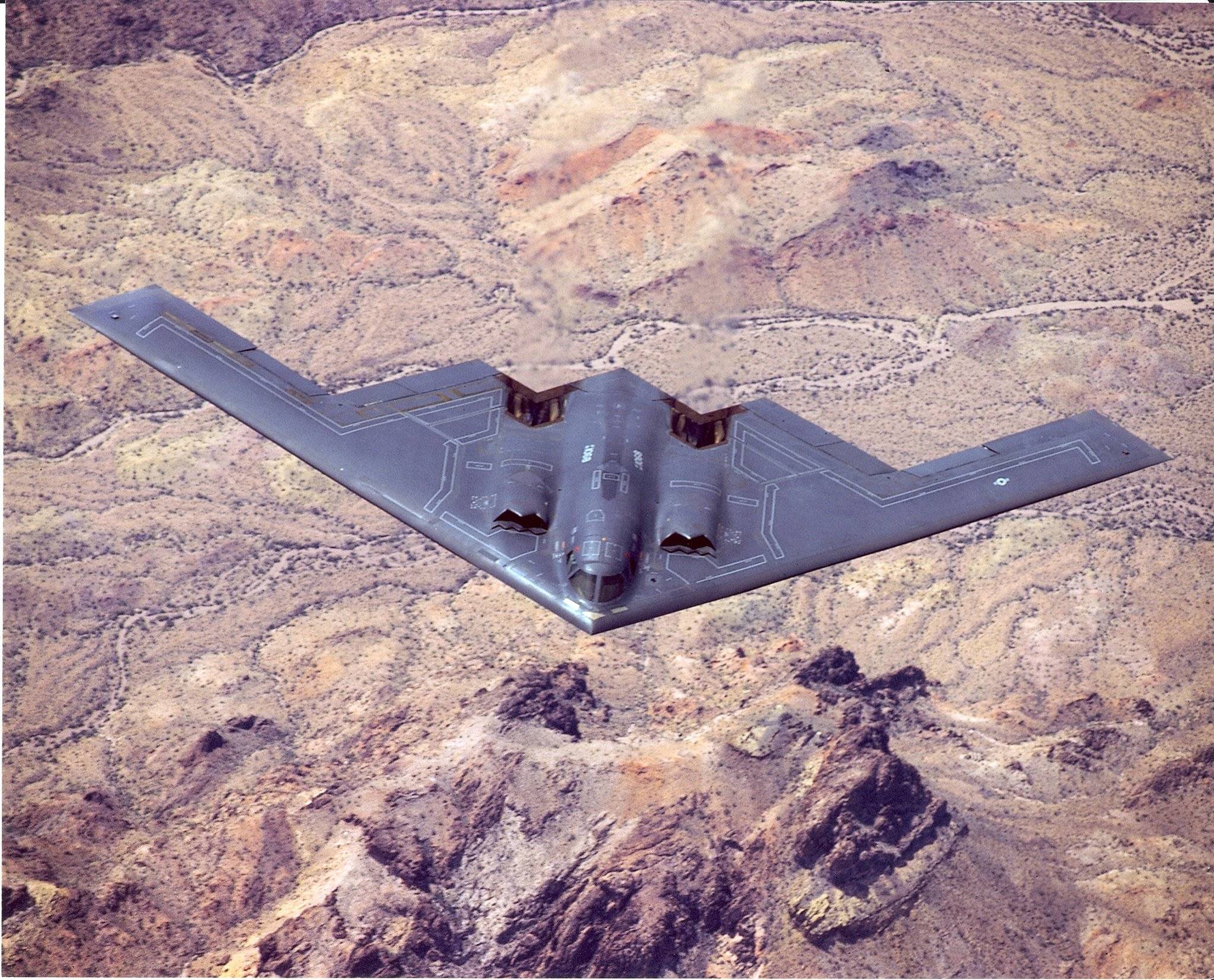 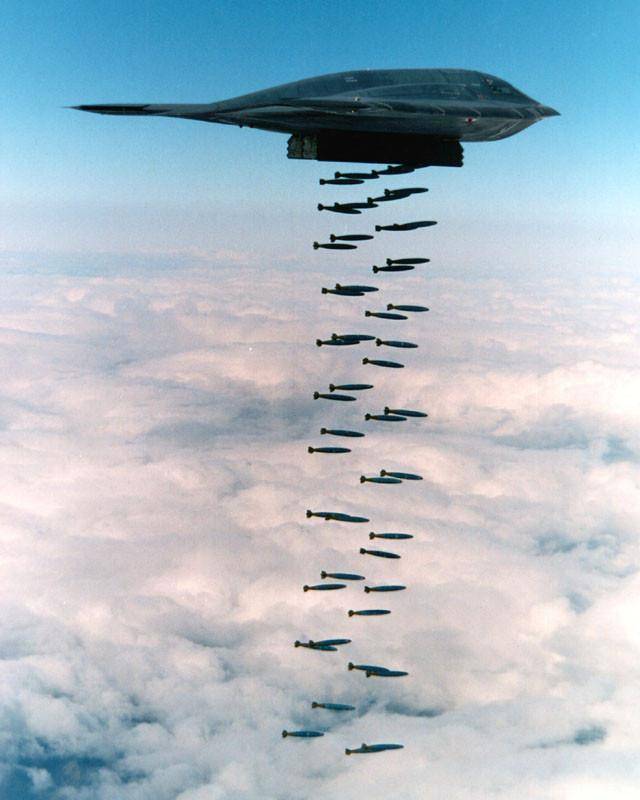 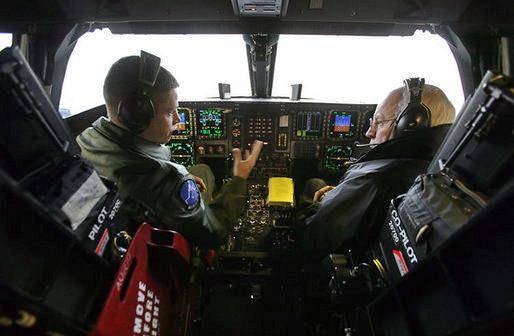 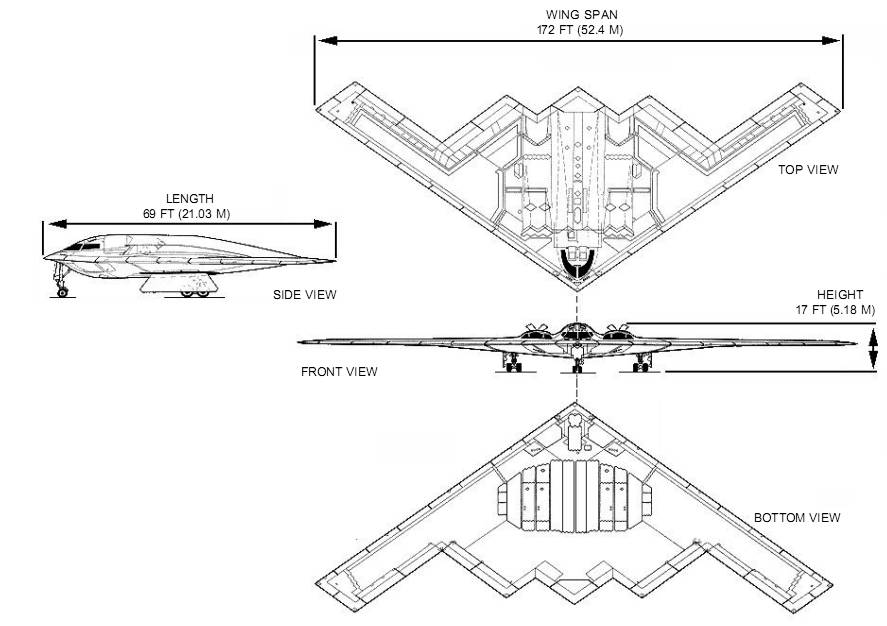 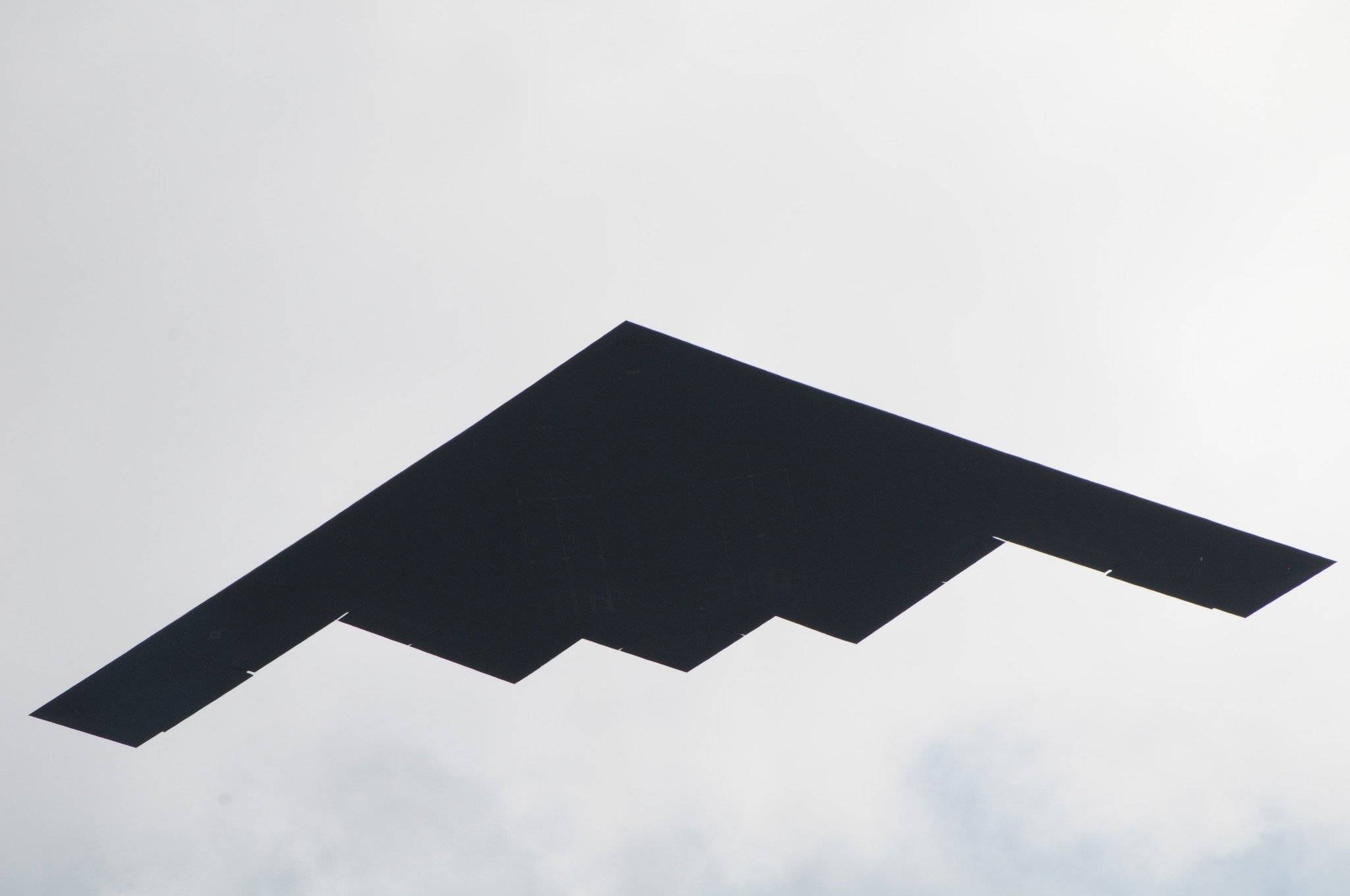 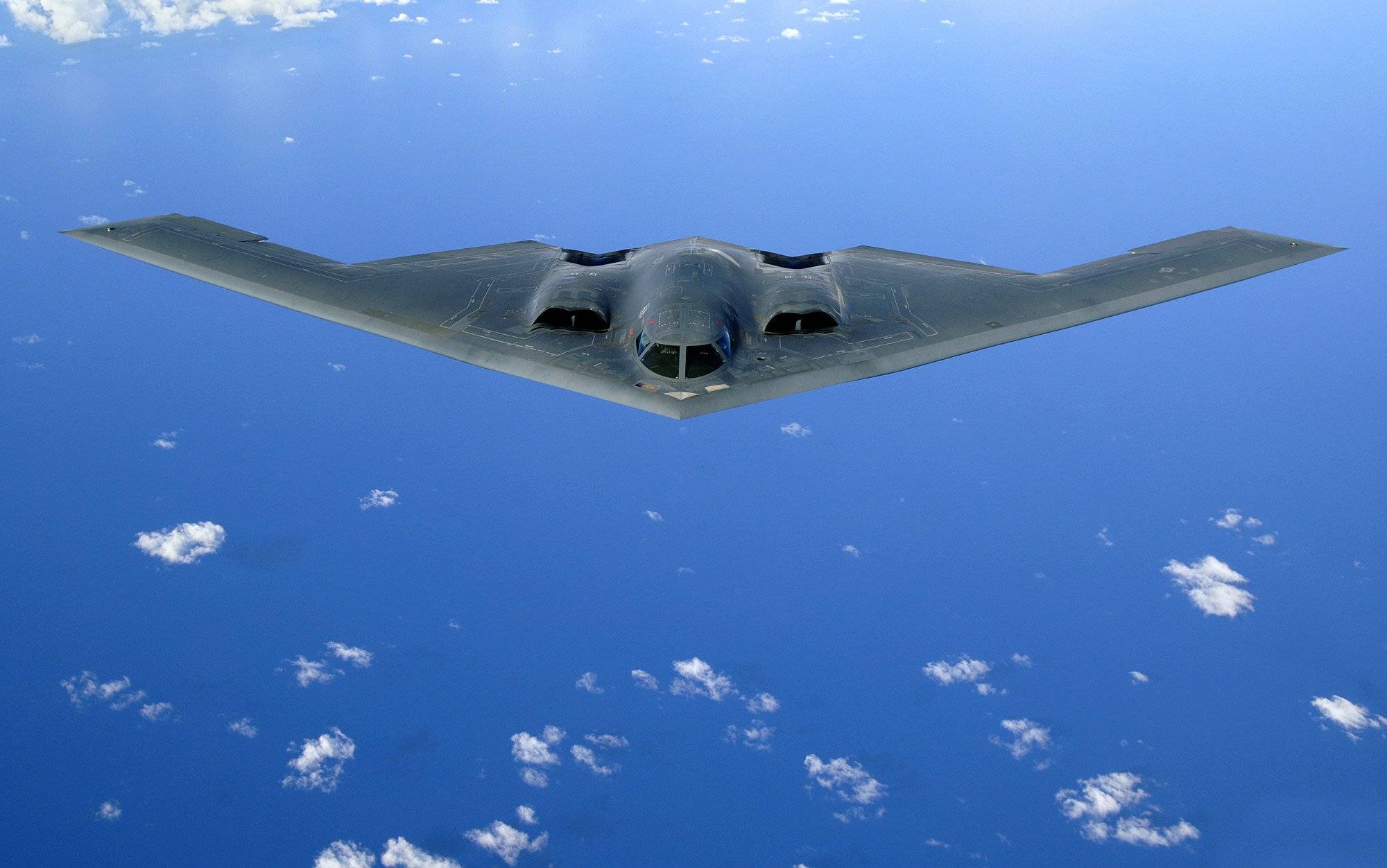 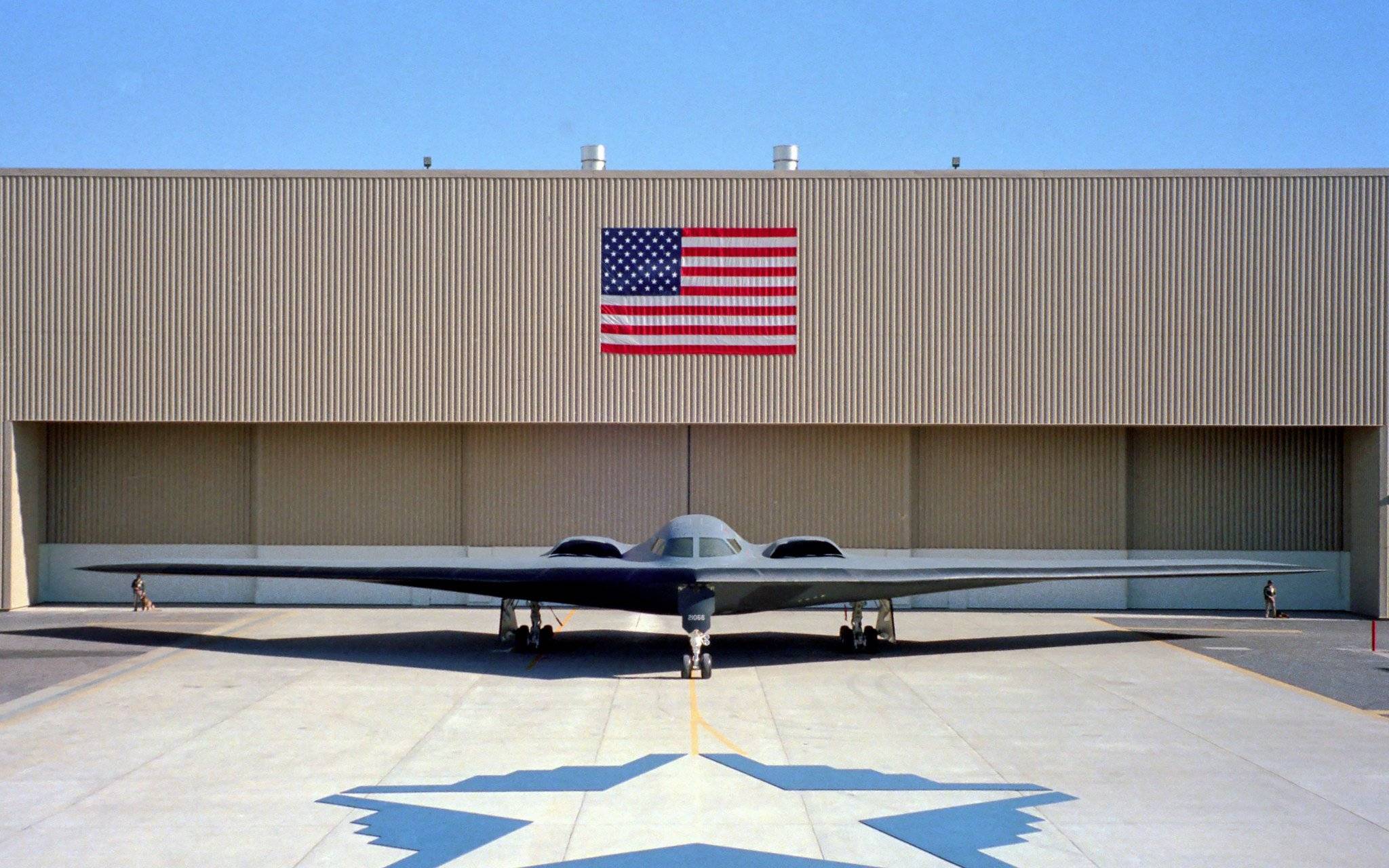 The Northrop Grumman B-2 Spirit, also known as the Stealth Bomber, is an American strategic bomber, featuring low observable stealth technology designed for penetrating dense anti-aircraft defenses; it is able to deploy both conventional and nuclear weapons. The bomber has a crew of two and can drop up to eighty 500 lb (230 kg)-class JDAM GPS-guided bombs, or sixteen 2,400 lb (1,100 kg) B83 nuclear bombs. The B-2 is the only aircraft that can carry large air-to-surface standoff weapons in a stealth configuration.

Development originally started under the "Advanced Technology Bomber" (ATB) project during the Carter administration, and its performance was one of the reasons for his cancellation of the B-1 Lancer. ATB continued during the Reagan administration, but worries about delays in its introduction led to the reinstatement of the B-1 program as well. Program costs rose throughout development. Designed and manufactured by Northrop Grumman with assistance from Boeing, the cost of each aircraft averaged US$737 million (in 1997 dollars). Total procurement costs averaged $929 million per aircraft, which includes spare parts, equipment, retrofitting, and software support. The total program cost including development, engineering and testing, averaged $2.1 billion per aircraft in 1997.

Because of its considerable capital and operating costs, the project was controversial in the U.S. Congress and among the Joint Chiefs of Staff. The winding-down of the Cold War in the latter portion of the 1980s dramatically reduced the need for the aircraft, which was designed with the intention of penetrating Soviet airspace and attacking high-value targets. During the late 1980s and 1990s, Congress slashed plans to purchase 132 bombers to 21. In 2008, a B-2 was destroyed in a crash shortly after takeoff, and the crew ejected safely. A total of 20 B-2s remain in service with the United States Air Force.

The B-2 is capable of all-altitude attack missions up to 50,000 ft, with a range of more than 6,000 nautical miles unrefuelled and over 10,000 nautical miles with one refueling. Though originally designed primarily as a nuclear bomber, it was first used in combat to drop conventional bombs on Serbia during the Kosovo War in 1999, and saw continued use during the wars in Iraq and Afghanistan.

The B-2 Spirit was developed to take over the USAF's vital penetration missions, able to travel deep into enemy territory to deploy their ordnance, which could include nuclear weapons. The B-2 is a flying wing aircraft, meaning it has no fuselage or tail. The blending of low-observable technologies with high aerodynamic efficiency and large payload gives the B-2 significant advantages over previous bombers. Low observability provides a greater freedom of action at high altitudes, thus increasing both range and field of view for onboard sensors. The U.S. Air Force reports its range as approximately 6,000 nautical miles (6,900 mi; 11,000 km). At cruising altitude the B-2 refuels every six hours, taking on up to 50 tons of fuel at a time.

Side view of a B-2 Spirit

Due to the aircraft's complex flight characteristics and design requirements to maintain very-low visibility to multiple means of detection, both the development and construction of the B-2 required pioneering use of computer-aided design and manufacturing technologies. Northrop Grumman is the B-2's prime contractor; other contributing subcontractors include Boeing, Raytheon (formerly Hughes Aircraft), G.E. and Vought Aircraft. The B-2 bears a resemblance to earlier Northrop aircraft, the YB-35 and YB-49 were both flying wing bombers that had been cancelled in development in the early 1950s; allegedly for political reasons.

As of September 2013 about 80 pilots fly the B-2. Each aircraft has a crew of two, a pilot in the left seat and mission commander in the right, and has provisions for a third crew member if needed. For comparison, the B-1B has a crew of four and the B-52 has a crew of five. The B-2 is highly automated and, unlike most two-seat aircraft, one crew member can sleep in a camp bed, use a toilet, or prepare a hot meal while the other monitors the aircraft; extensive sleep cycle and fatigue research was conducted to improve crew performance on long sorties.

The B-2, in the envisaged Cold War scenario, was to perform deep-penetrating nuclear strike missions, making use of its stealthy capabilities to avoid detection and interception throughout missions. There are two internal bomb bays in which munitions are stored either on a rotary launcher or two bomb-racks; the carriage of the weapons loadouts internally results in less radar visibility than externally mounting of munitions. Nuclear ordnance includes the B61 and B83 nuclear bombs; the AGM-129 ACM cruise missile was also intended for use on the B-2 platform.

It was decided, in light of the dissolution of the Soviet Union, to equip the B-2 for conventional precision attacks as well as for the strategic role of nuclear-strike. The B-2 features a sophisticated GPS-Aided Targeting System (GATS) that uses the aircraft's APQ-181 synthetic aperture radarto map out targets prior to deployment of GPS-aided bombs (GAMs), later superseded by the Joint Direct Attack Munition (JDAM). In the B-2's original configuration, up to 16 GAMs or JDAMs could be deployed; an upgrade program in 2004 raised the maximum carriable capacity to 80 JDAMs.

The B-2 has various conventional weapons in its arsenal, able to equip Mark 82 and Mark 84 bombs, CBU-87 Combined Effects Munitions, GATOR mines, and the CBU-97 Sensor Fuzed Weapon. In July 2009, Northrop Grumman reported the B-2 was compatible with the equipment necessary to deploy the 30,000 lb (14,000 kg) Massive Ordnance Penetrator (MOP), which is intended to attack reinforced bunkers; up to two MOPs could be equipped in the B-2's bomb bays, the B-2 is the only platform compatible with the MOP as of 2012. As of 2011, the AGM-158 JASSM cruise missile is an upcoming standoff munition to be deployed on the B-2 and other platforms. This is to be followed by the Long Range Standoff Weapon which may give the B-2 a standoff nuclear capability for the first time.

In order to make the B-2 more effective than any previous bomber, it has integrated many advanced and modern avionics systems into its design, these have been modified and improved in light of the switch to conventional warfare missions. The B-2 features the low probability of intercept AN/APQ-181 multi-mode radar, a fully digital navigation system that is integrated with terrain-following radar and Global Positioning System (GPS) guidance, and a Defensive Management System (DMS) to inform the flight crew against possible threats. The onboard DMS is capable of automatically assessing the detection capabilities of identified threats and indicated targets.

A maintenance crew servicing a B-2 atAndersen AFB, Guam, 2004

For safety and fault-detection purposes, an on-board test system is interlinked with the majority of avionics on the B-2 to continuously monitor the performance and status of thousands of components and consumables; it also provides post-mission servicing instructions for ground crews. In 2008, many of the standalone distributed computers on board the B-2, including the primary flight management computer, were being replaced by a single integrated system.

In addition to periodic software upgrades and the introduction of new radar-absorbent materials across the fleet, the B-2 has had several major upgrades to its avionics and combat systems. For battlefield communications, both Link-16 and a high frequency satellite link have been installed, compatibility with various new munitions has been undertaken, and the AN/APQ-181 radar's operational frequency was shifted in order to avoid interference with other operator's equipment. The upgraded radar features entirely replaced arrays by those of a newer design, the AN/APQ-181 is now an Active Electronically Scanned Array (AESA) radar.

Vice President Dick Cheney sits inside a B-2's cockpit with pilot Capt. Luke Jayne during a visit to Whiteman AFB in 2006.

In order to address the inherent flight instability of a flying wing aircraft, the B-2 uses a complex quadruplex computer-controlled fly-by-wire flight control system, that can automatically manipulate flight surfaces and settings without direct pilot inputs in order to maintain aircraft stability. The flight computer receives information on external conditions such as the aircraft's current air speed and angle of attack via pilot-static sensing plates, as opposed to traditional pitot tubes which would negatively affect the aircraft's stealth capabilities. The flight actuation system incorporates both hydraulic and electrical servoactuated components, and it was designed with a high level of redundancy and fault-diagnostic capabilities.

Northrop had investigated several means of applying directional control that would least infringe on the aircraft's radar profile, eventually settling on a combination of split brake-rudders and differential thrust. Engine thrust became a key element of the B-2's aerodynamic design process early on; thrust not only affects drag and lift but pitching and rolling motions as well. Four pairs of control surfaces are located along the wing's trailing edge; while most surfaces are used throughout the aircraft's flight envelope, the inner elevons are normally only in use at slow speeds, such as landing. To avoid potential contact damage during takeoff and to provide a nose-down pitching attitude, all of the elevons remain drooped during takeoff until a high enough airspeed has been attained.

As of September 2013 no missile has ever been fired at a B-2. Its low-observable, or "stealth", characteristics enable the undetected penetration of sophisticated anti-aircraft defenses and to attack even heavily defended targets. This stealth comes from a combination of reduced acoustic, infrared, visual and radar signatures to evade the various detection systems that could be used to detect and be used to direct attacks against an aircraft. The majority of the B-2 is made out of a carbon-graphite composite material that is stronger than steel and lighter than aluminium. Perhaps most crucially, it also absorbs a significant amount of radar energy; reportedly, the B-2 has a radar signature of about 0.1 m2. The bomber does not always fly stealthily; when nearing air defenses pilots "stealth up" the B-2, the details of which are secret. The aircraft disappears from radar, except briefly when the bomb bay opens. The bomber remains vulnerable, however, to visual interception by fighters.

In contrast to the flat surfaces of the earlier F-117 Nighthawk, the B-2 is composed of many curved and rounded surfaces across its exposed airframe to deflect radar beams. Additional reduction in its radar signature was achieved by the use of various radar-absorbent materials (RAM) to absorb and neutralize radar beams. The B-2's clean, low-drag flying wing configuration not only gives it exceptional range but is also beneficial to reducing its radar profile. Although it is normal for most large aircraft to leak fuel, the B-2 is assembled with unusually tight tolerances to avoid leaks as they could increase its radar signature.

Another design feature is the placement of the engines, which are buried within the B-2's wing to conceal the engines' fans and minimize thermal visibility of the exhaust. The original design had tanks for a contrail-inhibiting chemical, but this was replaced in production aircraft by a contrail sensor that alerts the crew when they should change altitude. To reduce optical visibility during daylight operations, the B-2 is painted in an anti-reflective paint.

Innovations such as alternate high-frequency material (AHFM) and automated material application methods were also incorporated into the aircraft to enhance its radar-absorbent properties and lower maintenance requirements. In early 2004, Northrop Grumman began applying a newly developed AHFM to operational B-2s. In order to protect the operational integrity of its sophisticated radar absorbent material and coatings, each B-2 is kept inside a climate-controlled hangar large enough to accommodate its 172-foot (52 m) wingspan.