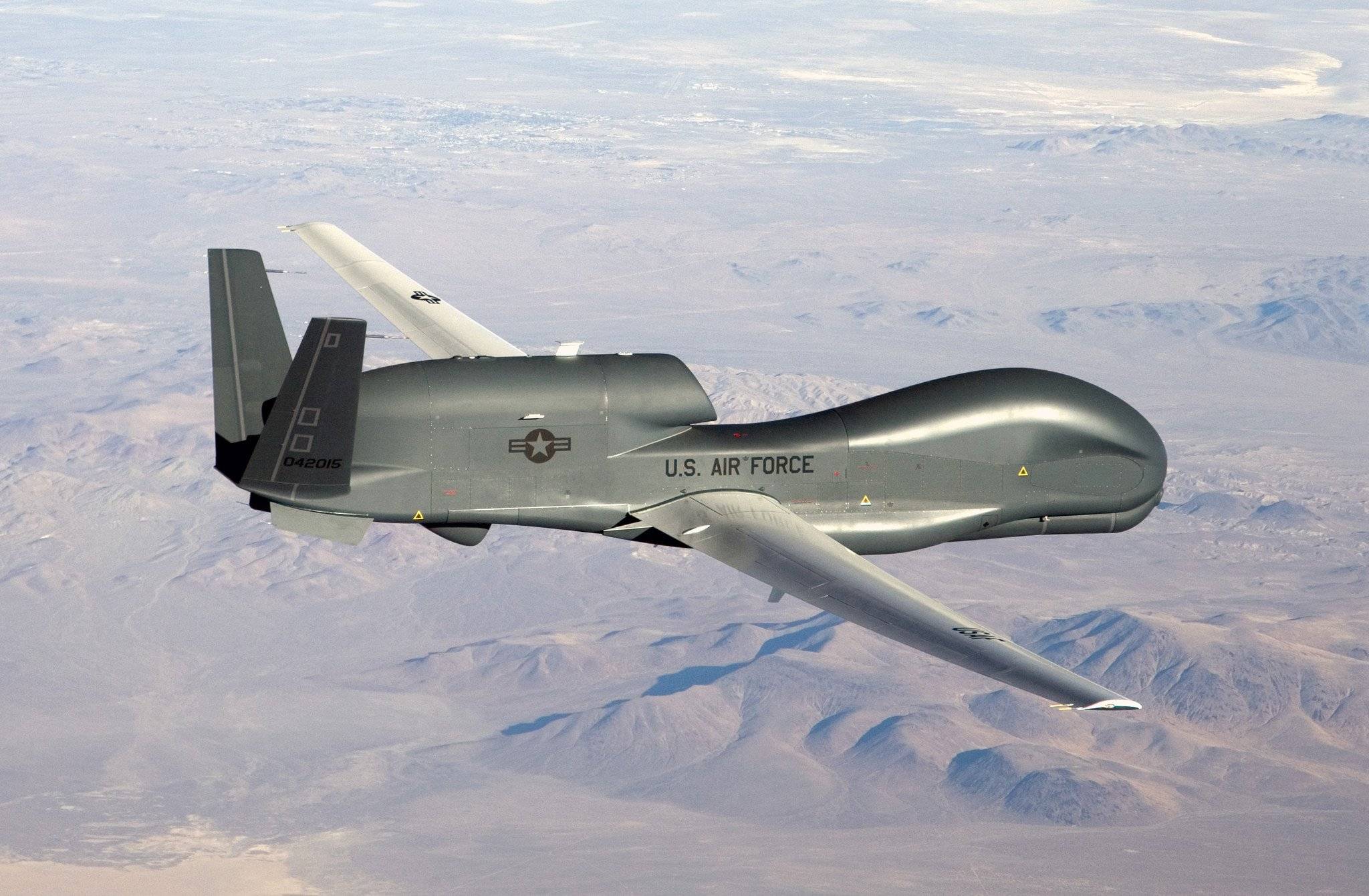 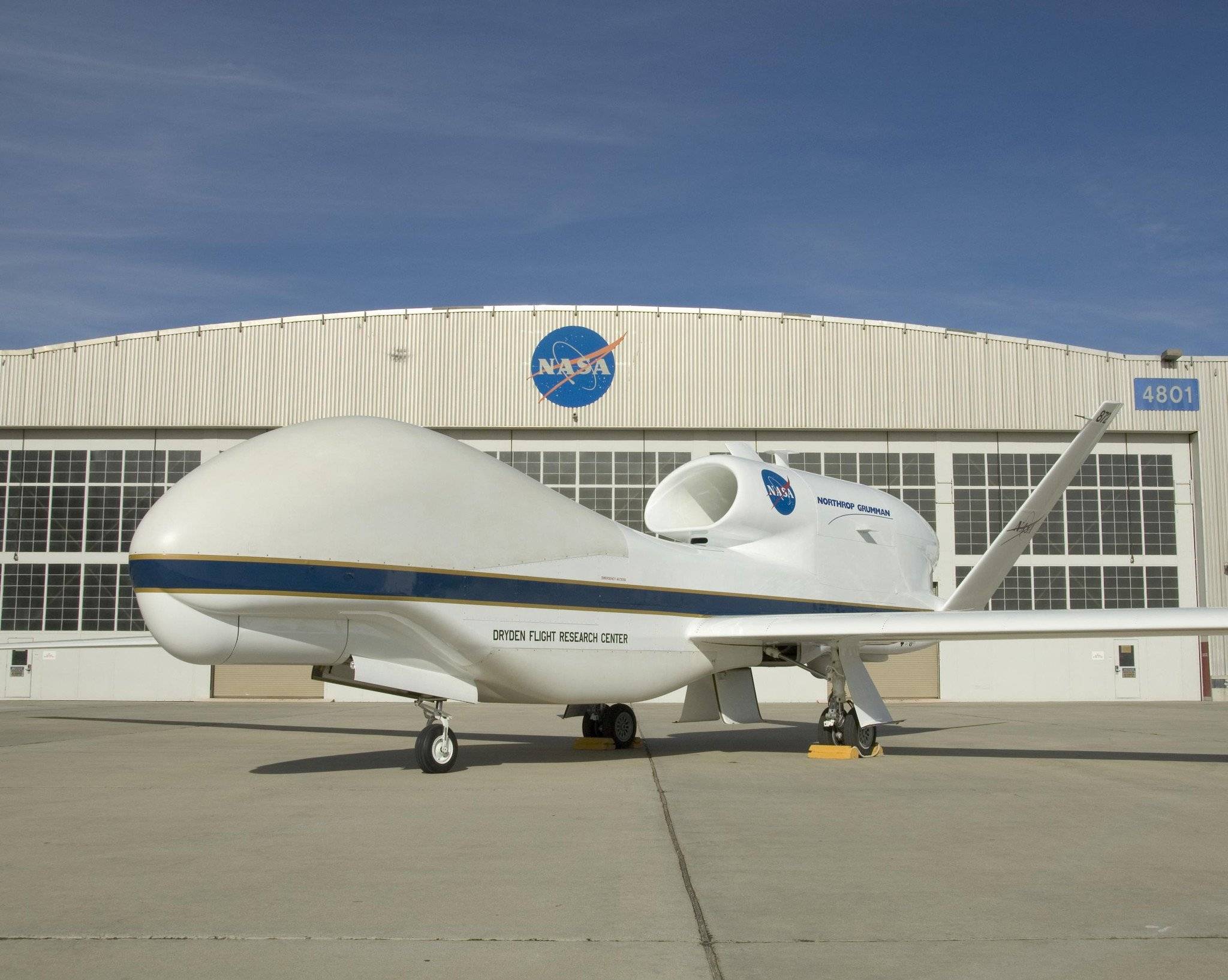 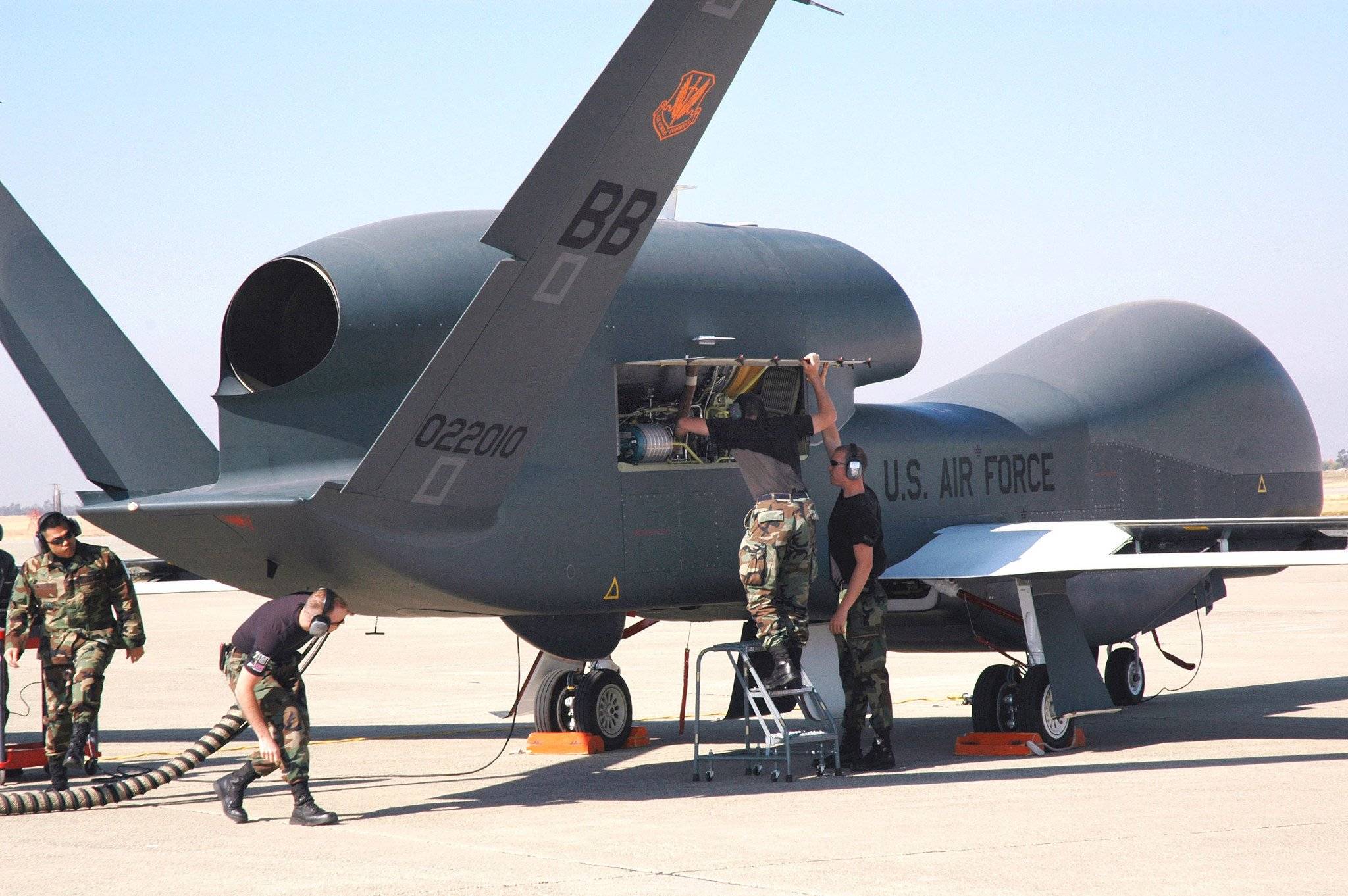 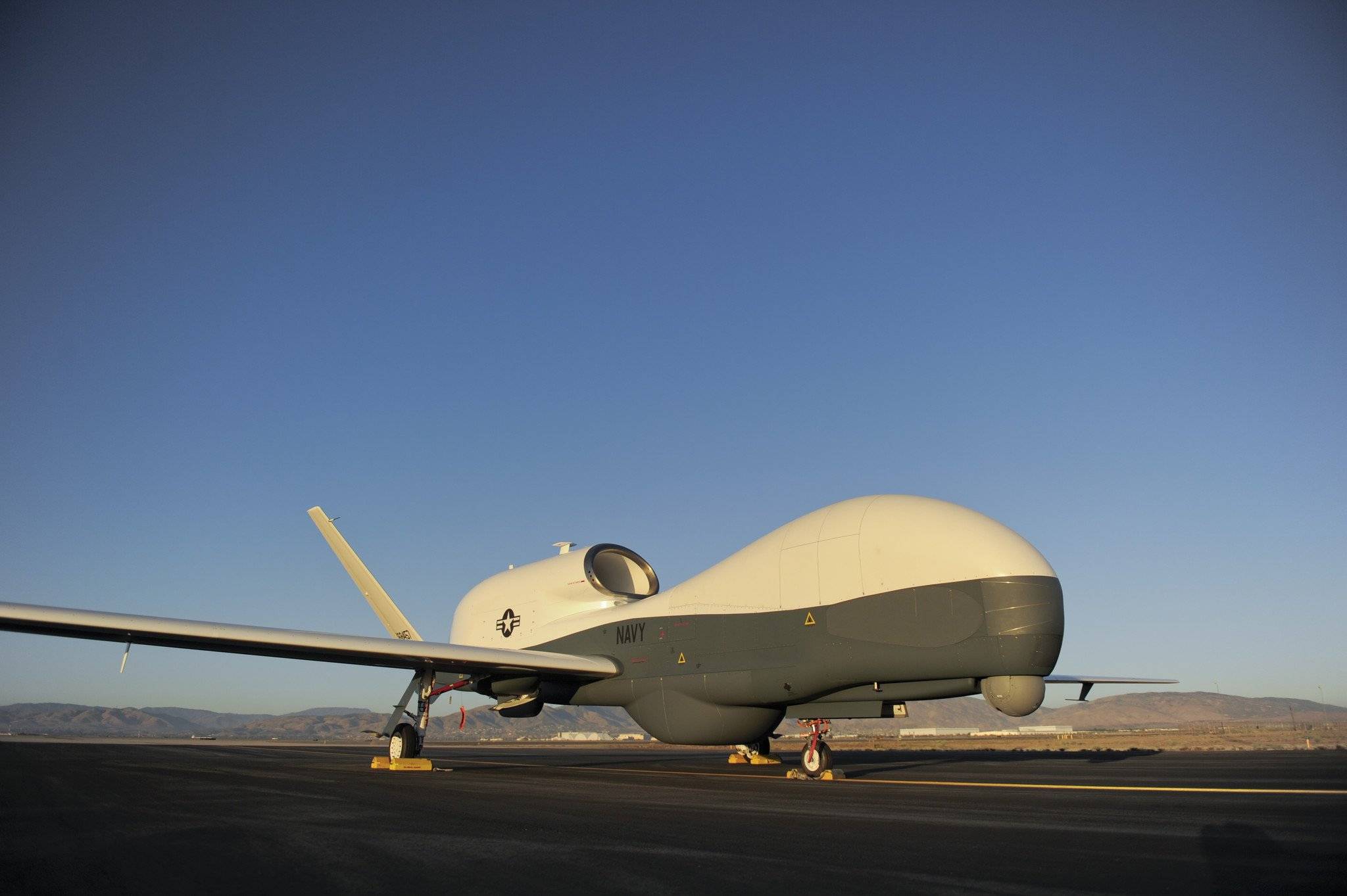 The Northrop Grumman RQ-4 Global Hawk is an unmanned aerial vehicle (UAV) surveillance aircraft. It was initially designed by Ryan Aeronautical (now part of Northrop Grumman), and known as Tier II+ during development. In role and operational design, the Global Hawk is similar to the venerable Lockheed U-2. The RQ-4 provides a broad overview and systematic surveillance using high resolution synthetic aperture radar (SAR) and long-range electro-optical/infrared (EO/IR) sensors with long loiter times over target areas. It can survey as much as 40,000 square miles (100,000 km2) of terrain a day.

The Global Hawk is operated by the United States Air Force and U.S. Navy. It is used as a high-altitude platform for surveillance and security. Missions for the Global Hawk cover the spectrum of intelligence collection capability to support forces in worldwide military operations. According to the United States Air Force, the superior surveillance capabilities of the aircraft allow more precise weapons targeting and better protection of friendly forces. Cost overruns have led to the original plan to acquire 63 aircraft being cut to 45, and to a 2013 proposal to mothball the 21 Block 30 signal-intelligence variants. Each aircraft was to cost US$35 million in 2005, but this had risen to $222.7M per aircraft (including development costs) by 2013. The U.S. Navy has developed the Global Hawk into the MQ-4C Triton version for maritime surveillance.

The Global Hawk UAV system comprises the RQ-4 air vehicle, which is outfitted with various equipment such as sensor packages and communication systems; and a ground element consisting of a Launch and Recovery Element (LRE), and a Mission Control Element (MCE) with ground communications equipment. Each RQ-4 air vehicle is powered by an Allison Rolls-RoyceAE3007H turbofan engine with 7,050 lbf (31.4 kN) thrust, and carries a payload of 2,000 pounds (900 kilograms). The fuselage comprises an aluminum, semi-monocoque construction; the wings are made of lightweight high-strength composite materials.

The Integrated Sensor Suite (ISS) is provided by Raytheon and consists of a synthetic aperture radar (SAR), electro-optical (EO), and infrared (IR) sensors. Either the EO or the IR sensors can operate simultaneously with the SAR. Each of the sensors provides wide area search imagery and a high-resolution spot mode. The SAR has a ground moving target indicator (GMTI) mode, which can provide a text message providing the moving target's position and velocity. Both SAR and EO/IR imagery are transmitted from the aircraft to the MCE as individual frames, and reassembled during ground processing. An onboard inertial navigation system, supplemented by Global Positioning System updates, comprises the aircraft's onboard navigational suite. Global Hawk is intended to operate autonomously and "untethered" using a satellite data link (either Ku or UHF) for sending data from the aircraft to the MCE. The common data link can also be used for direct down link of imagery when the UAV is operating within line-of-sight of compatible ground stations.

The ground segment consists of a Mission Control Element (MCE) and Launch and Recovery Element (LRE), provided by Raytheon. The MCE is used for mission planning, command and control, and image processing and dissemination; an LRE for controlling launch and recovery; and associated ground support equipment. (The LRE provides precision differential global positioning system corrections for navigational accuracy during takeoff and landings, while precision coded GPS supplemented with an inertial navigation system is used during mission execution.) By having separable elements in the ground segment, the MCE and the LRE can operate in geographically separate locations, and the MCE can be deployed with the supported command's primary exploitation site. Both ground segments are contained in military shelters with external antennas for line-of-sight and satellite communications with the air vehicles.

Photograph taken by US Navy Global Hawk with an aerial view of wildfires in Northern California, 2008

The Global Hawk carries the Hughes Integrated Surveillance & Reconnaissance (HISAR) sensor system. HISAR is a lower-cost derivative of the ASARS-2 package that Hughes developed for the Lockheed U-2. HISAR is also fitted in the US Army's RC-7B Airborne Reconnaissance Low Multifunction (ARLM) manned surveillance aircraft, and is being sold on the international market. HISAR integrates a SAR-MTI system, along with an optical and an infrared imager. All three sensors are controlled and their outputs filtered by a common processor and transmitted in real time at up to 50 Mbit/s to a ground station.

The visible and infrared imagers share the same gimballed sensor package, and use common optics, providing a telescopic close-up capability. It can be optionally fitted with an auxiliary SIGINT package. To improve survivability, the Global Hawk is fitted with a Raytheon developed AN/ALR-89 self-protection suite consisting of the AN/AVR-3 Laser Warning System, AN/APR-49 Radar Warning Receiver and a jamming system. An ALE-50 towed decoy also aids in the Global Hawk's deception of enemy air defenses.

In July 2006, the US Air Force began testing the Global Hawk Block 30 upgrades in the Benefield Anechoic Facility at Edwards AFB; such as the Advanced Signals Intelligence Payload, an extremely sensitive SIGINT processor. In 2006, a specialist radar system, the Multi-Platform Radar Technology Insertion Program, or MP-RTIP, began testing on the Scaled Composites Proteus; one modified Global Hawk shall carry the radar following validation. In 2010, Northrop spoke on the sensor capabilities of the new Block 40 aircraft, including MP-RTIP radar, emphasizing surveillance over reconnaissance.