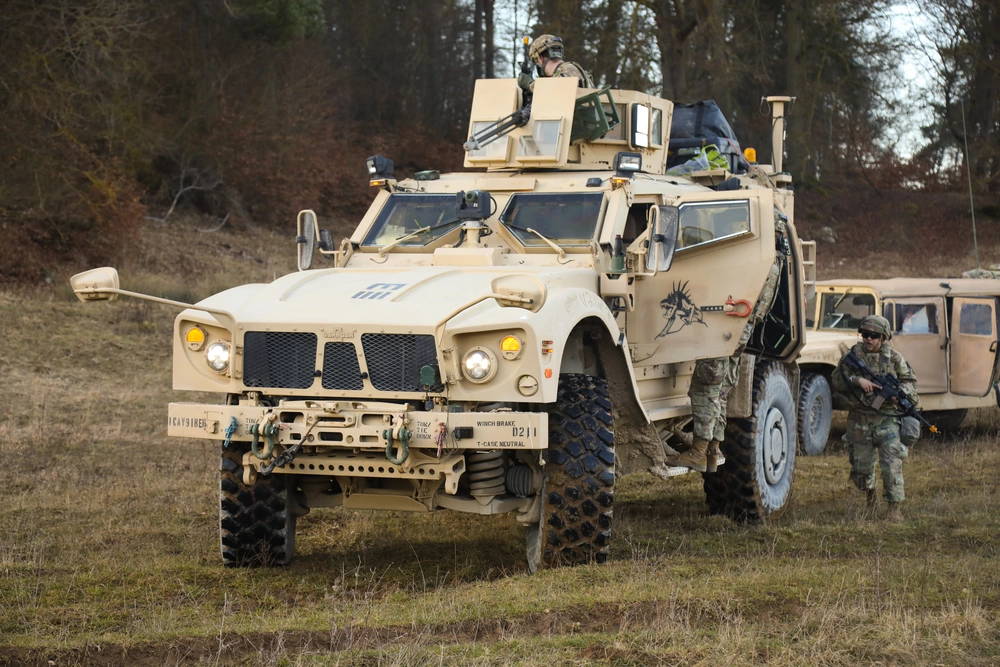 The Oshkosh M-ATV is an MRAP (Mine Resistant Ambush Protected) vehicle developed by the Oshkosh Corporation of Oshkosh, Wisconsin. It is designed to provide the same levels of protection as the larger and heavier previous MRAPs but with improved mobility and it is intended to replace M1114 HMMWVs.

The M-ATV utilizes the MTVR chassis and TAK-4 suspension with the Plasan designed armored hull developed for the Northrop Grumman/Oshkosh JLTV. The V-shaped Plasan armored hull offers protection for the occupants from IED attacks while the centrally inflated run-flat tires allow the M-ATV to travel at least 30 miles at 30 mph even if two tires lose pressure. The vehicle can also take a 7.62 mm round to its engine oil/coolant/hydraulic system and continue to drive for at least one kilometer. The Stat-X engine fire suppression system provides for further survivability. The Tak-4 suspension is coil sprung and fully independent, and offers 16 inches of travel. The M-ATV's roof mounted turret is capable of mounting weapons such as an M240 machine gun, a Mk 19 grenade launcher, an M2 Browning machine gun, or a BGM-71 TOW anti-tank guided missile launcher. The roof weapons can be operated either from the turret by person or remotely inside the cabin with a CROWS remote weapon system. The M-ATV also features modern vehicle safety systems such as Traction control and anti-lock brakes in addition to modern creature comforts such as an HVAC system and power outlets for charging portable electronic devices. Unique among MRAP vehicles are the M-ATV's rear-hinged, aka, suicide doors.

At AUVSI 2013, Oshkosh announced it will integrate the TerraMax system onto the M-ATV to allow the vehicles to be converted into unmanned ground vehicles. The goal is to use the M-ATV as an unmanned platform for route clearance and counter-IED missions by engineers.

In July 2012, the United Arab Emirates Army ordered 750 M-ATVs. They are meant to provide greater off-road mobility and crew protection for regional security and peace-keeping operations. Deliveries are expected to begin in January 2013 and be completed by August 2013.