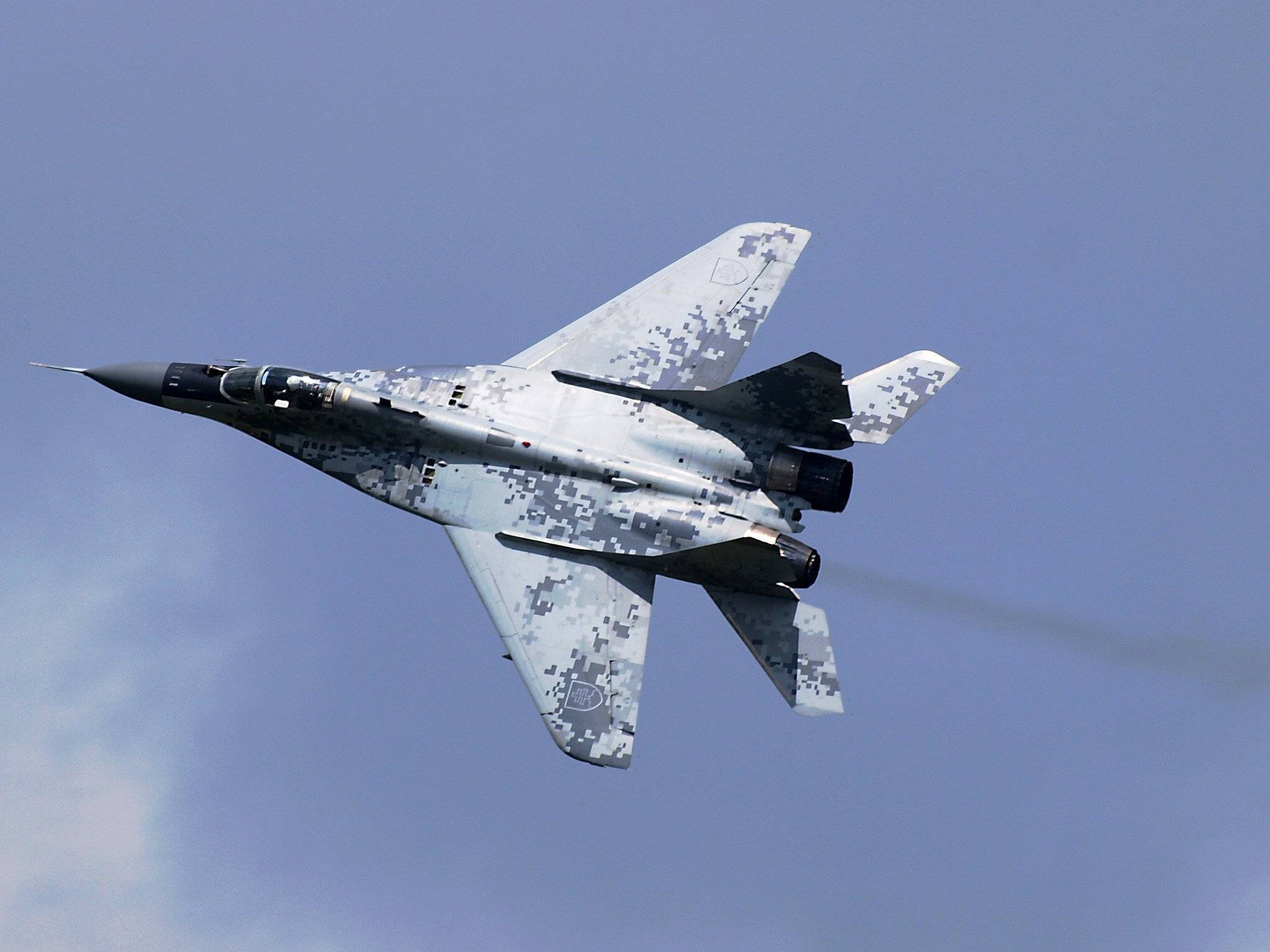 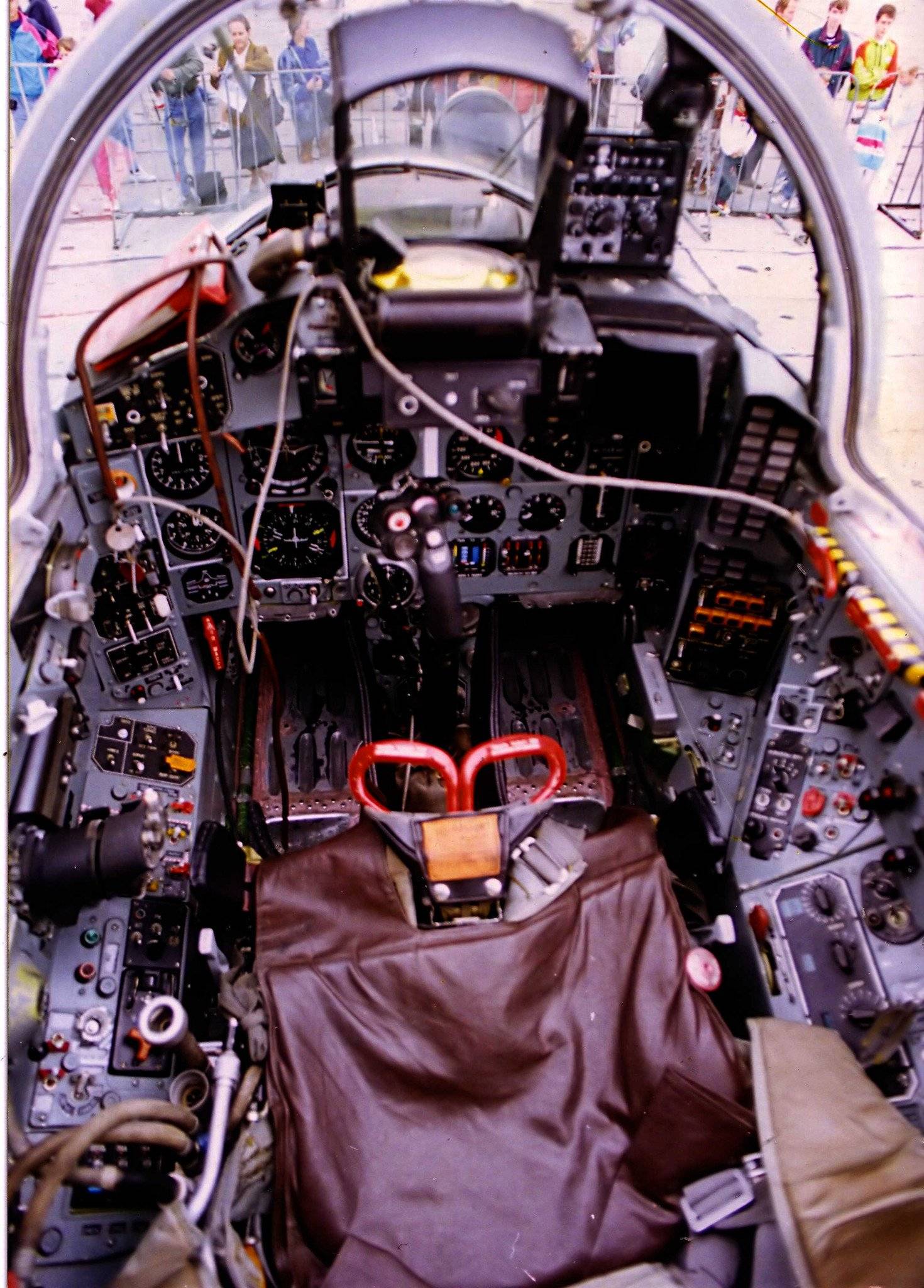 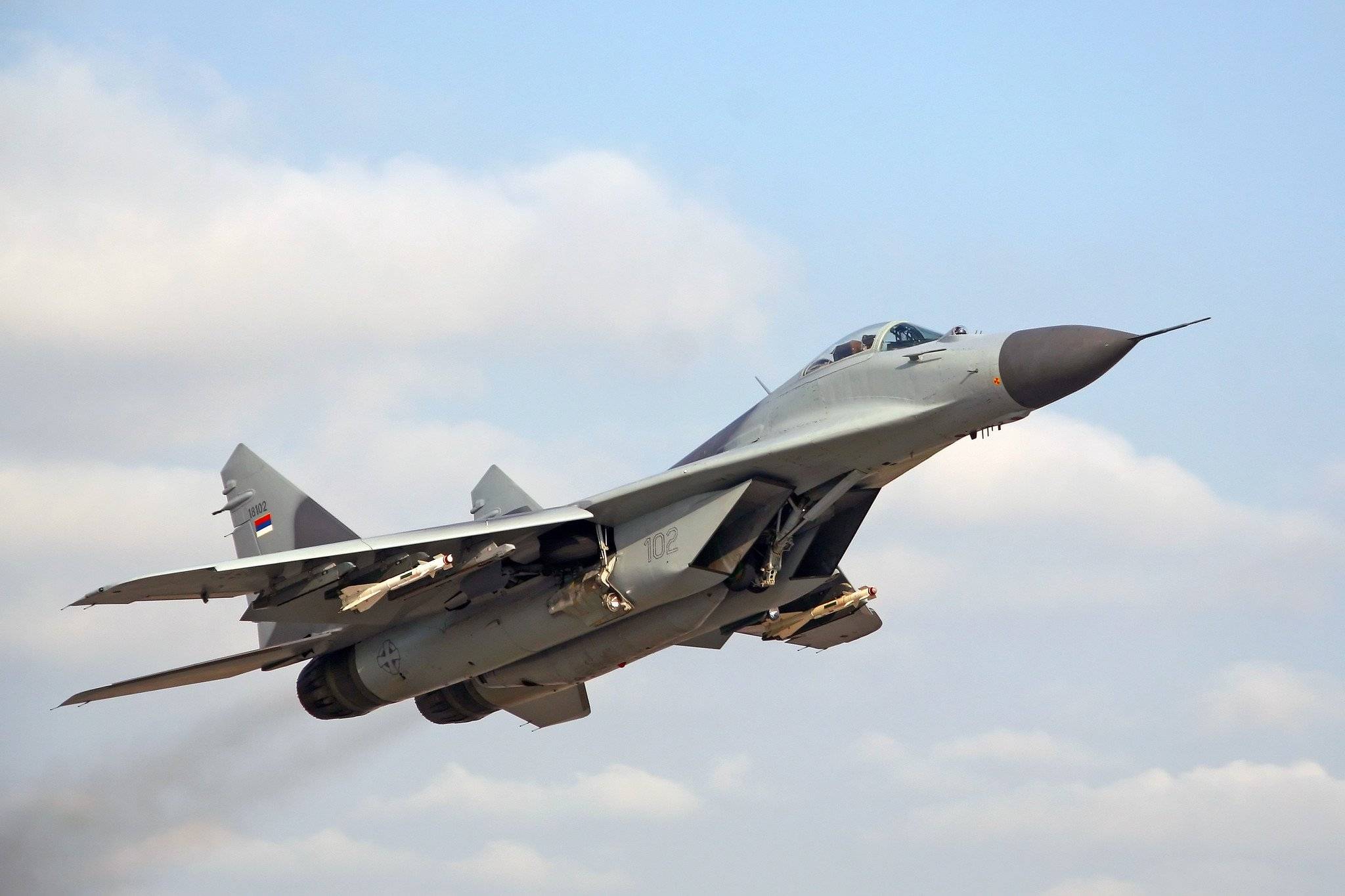 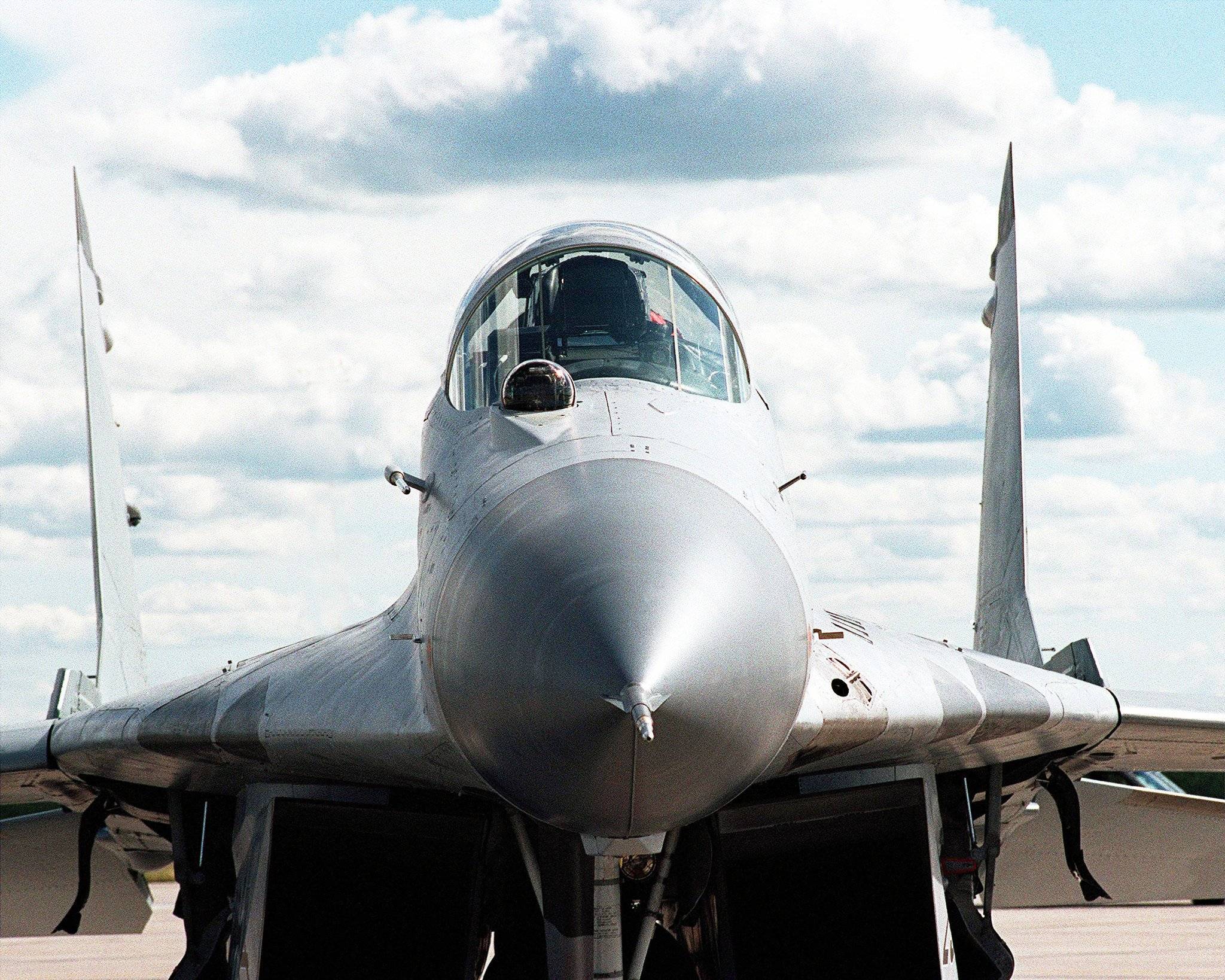 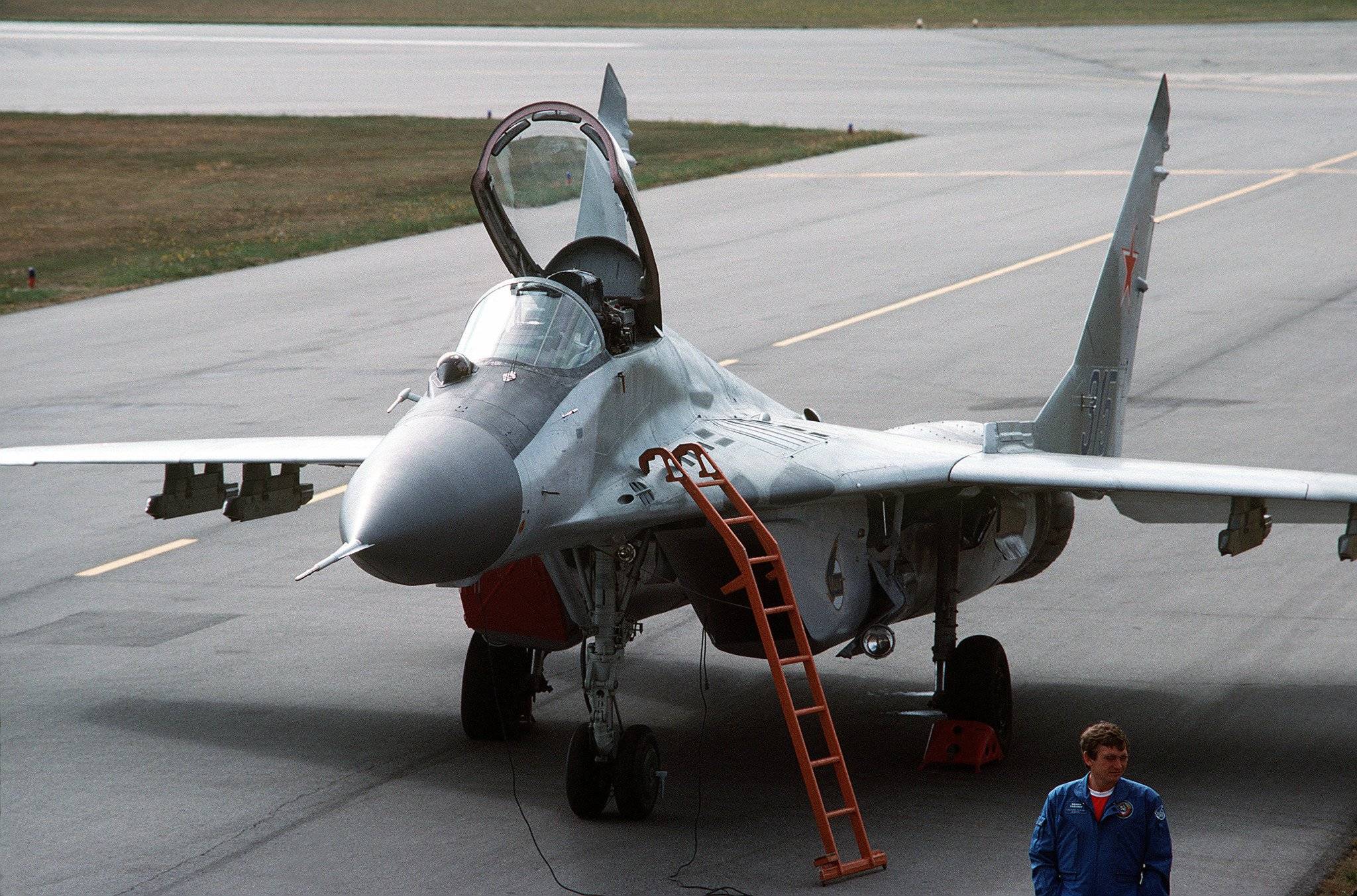 Used By US Air Force in "Aggressor" Training

The Mikoyan MiG-29 (Russian: Микоян МиГ-29; NATO reporting name: "Fulcrum") is a fourth-generation jet fighter aircraft designed in the Soviet Union. Developed by the Mikoyan design bureau as an air superiority fighter during the 1970s, the MiG-29, along with the larger Sukhoi Su-27, was developed to counter new American fighters such as the McDonnell Douglas F-15 Eagle, and the General Dynamics F-16 Fighting Falcon. The MiG-29 entered service with the Soviet Air Force in 1983.

While originally oriented towards combat against any enemy aircraft, many MiG-29s have been furnished as multirole fighters capable of performing a number of different operations, and are commonly outfitted to use a range of air-to-surface armaments and precision munitions. The MiG-29 has been manufactured in several major variants, including the multirole Mikoyan MiG-29M and the navalised Mikoyan MiG-29K; the most advanced member of the family to date is the Mikoyan MiG-35. Later models frequently feature improved engines, glass cockpits with HOTAS-compatible flight controls, modern radar and IRST sensors, considerably increased fuel capacity; some aircraft have also been equipped for aerial refuelling.

Following the dissolution of the Soviet Union, a number of successor states have continued to operate the MiG-29; the largest of which is the Russian Air Force. The Russian Air Force wanted to upgrade its existing fleet to the modernised MiG-29SMT configuration, but financial difficulties have limited deliveries. The MiG-29 has also been a popular export aircraft; over 30 individual nations either operate or have previously operated the aircraft to date, India being one of the largest export operators of the type. As of 2013, the MiG-29 is in production by Mikoyan, a subsidiary of United Aircraft Corporation (UAC) since 2006.

In 1997, the United States purchased 21 Moldovan aircraft under the Nunn–Lugar Cooperative Threat Reduction program. Fourteen were MiG-29Ss, which are equipped with an active radar jammer in its spine and are capable of being armed with nuclear weapons. Part of the United States’ motive to purchase these aircraft was to prevent them from being sold to "rogue states", especially Iran. This purchase could also provide the United States Air Force with a working evaluation and data for the MiG-29, and possibly for use in dissimilar air combat training. Such information may prove valuable in any future conflicts and can aid in the design and testing of current and future weapons platforms. In late 1997, the MiGs were delivered to the National Air and Space Intelligence Center (NASIC) at Wright-Patterson Air Force Base in Ohio, though many of the former Moldovan MiG-29s are believed to have been scrapped.