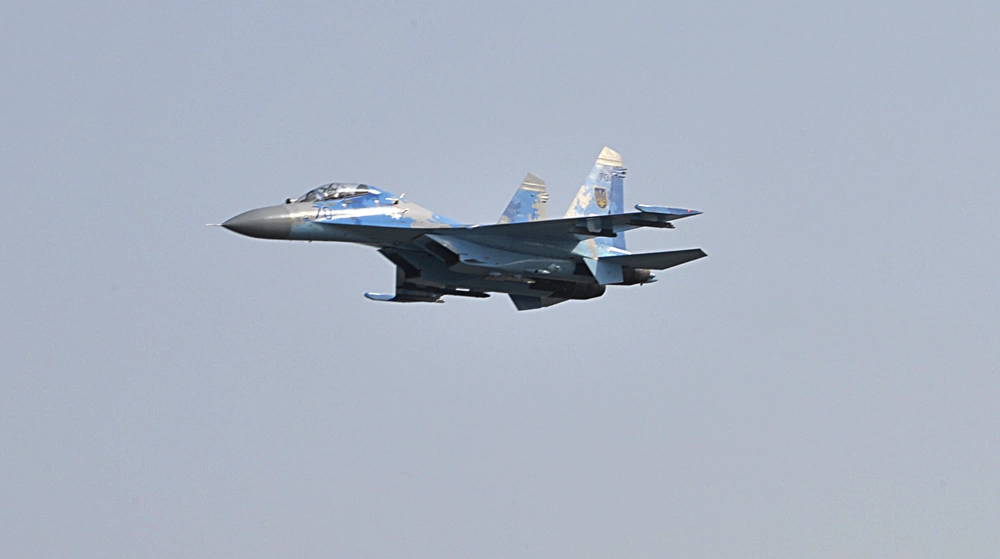 Used By US Air Force in "Aggressor" Training

The Sukhoi Su-27 (Russian: Сухой Су-27) (NATO reporting name: Flanker) is a twin-engine super-maneuverable fighter aircraft designed by Sukhoi. It was intended as a direct competitor for the large United States fourth generation fighters, with 3,530-kilometer (1,910 nmi) range, heavy armament, sophisticated avionics and high maneuverability. The Su-27 most often flies air superiority missions, but is able to perform almost all combat operations. Complementing the smaller MiG-29, the Su-27's closest US counterpart is the F-15 Eagle. The Su-27 entered service with the Soviet Air Force in 1985.

There are several related developments of the Su-27 design. The Su-30 is a two-seat, dual-role fighter for all-weather, air-to-air and air-to-surface deep interdiction missions. The Su-33 ‘Flanker-D’ is a navy fleet defense interceptor for use on aircraft carriers. Further versions include the side-by-side 2-seat Su-34 ‘Fullback’ strike variant and the Su-35 ‘Flanker-E’ improved air defense fighter.

The Su-27's basic design is aerodynamically similar to the MiG-29, but it is substantially larger. The swept wing blends into the fuselage at the leading edge extensions and is essentially a cropped delta (the delta wing with tips cropped for missile rails or ECM pods). The Su-27 is also an example of a tailed delta wing configuration, retaining conventional horizontal tailplanes, though it is not a true delta.

The Su-27 had the Soviet Union’s first operational fly-by-wire control system, developed based on Sukhoi OKB’s experience in the Sukhoi T-4 bomber project. Combined with relatively low wing loading and powerful basic flight controls, it makes for an exceptionally agile aircraft, controllable even at very low speeds and high angles of attack. In airshows the aircraft has demonstrated its maneuverability with a Cobra (Pugachev’s Cobra) or dynamic deceleration – briefly sustained level flight at a 120° angle of attack.

The naval version of the 'Flanker', the Su-27K (or Su-33), incorporates canards for additional lift, reducing take-off distances. These canards have also been incorporated in some Su-30s, the Su-35, and the Su-37. The Su-27 is armed with a single 30 mm Gryazev-Shipunov GSh-30-1 cannon in the starboard wingroot, and has up to 10 hardpoints for missiles and other weapons. Its standard missile armament for air-to-air combat is a mixture of Vympel R-73 (AA-11 Archer), Vympel R-27 (AA-10 'Alamo') weapons, the latter including extended range and IR guided models.

The Su-27 is equipped with a Phazotron N001 Myech coherent pulse-Doppler radar with track-while-scan and look-down / shoot-down capability. The fighter also has an OLS-27 infrared search and track (IRST) system in the nose just forward of the cockpit with a 80–100 km range.