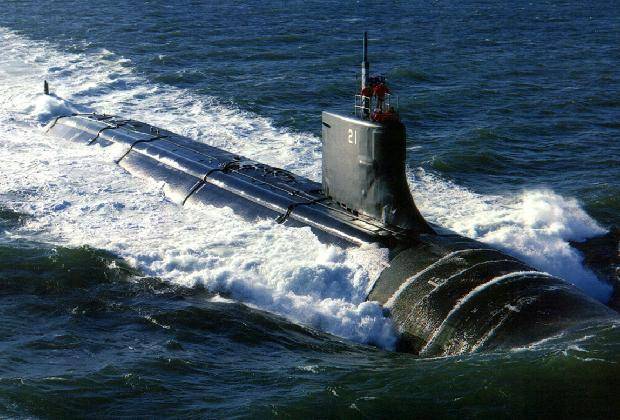 The Seawolf-class is a class of nuclear-powered fast attack submarines (SSN) in service with the United States Navy. The class was the intended successor to the Los Angeles class. Design work began in 1983. At one time, an intended fleet of 29 submarines was to be built over a ten-year period, later reduced to twelve submarines. The end of the Cold War and budget constraints led to the cancellation in 1995 of any further additions to the fleet, leaving the Seawolf class limited to just three boats. This, in turn, led to the design of the smaller Virginia class.

Compared to previous Los Angeles class submarines, Seawolf submarines are larger, faster, and significantly quieter; they also carry more weapons and have twice as many torpedo tubes, for a total of 8. The boats are able to carry up to 50 UGM-109 Tomahawk cruise missiles for attacking land and sea surface targets. As in all nuclear submarines, the load out of equipment, weapons and crew affects available excess buoyancy and thus operational parameters. The boats also have extensive equipment to allow for littoral, or shallow water, operations. The class uses the more advanced ARCI Modified AN/BSY-2 combat system, which includes a new, larger spherical sonar array, a wide aperture array (WAA), and a new towed-array sonar. Each boat is powered by a single S6W nuclear reactor, delivering 45,000 hp to a low-noise pump-jet.

As a result of their advanced design, however, Seawolf submarines were much more expensive. The projected cost for twelve submarines of this class was $33.6 billion, but after the Cold War, construction was stopped at three boats.