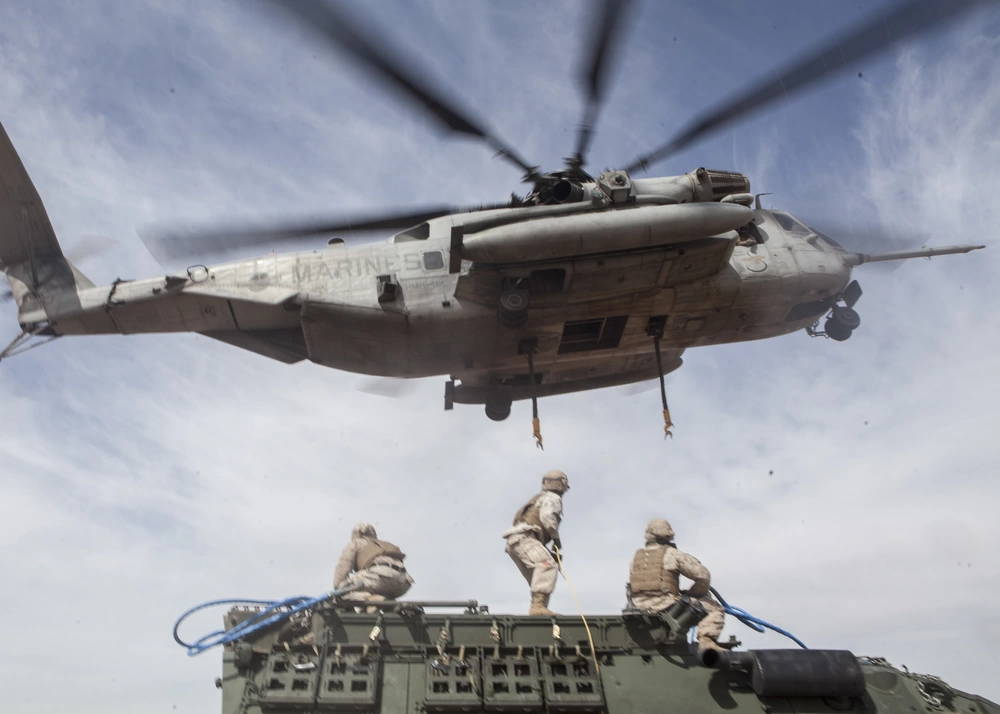 The CH-53 Sea Stallion is the most common name for the Sikorsky S-65 family of heavy-lift transport helicopters. Originally developed for use by the United States Marine Corps, it is also in service with Germany, Iran, Israel, and Mexico. The United States Air Force operated the HH-53 "Super Jolly Green Giant" during the late- and post-Vietnam War era, updating most of them as the MH-53 Pave Low.

The dimensionally-similar CH-53E Super Stallion is a heavier-lifting, improved version designated S-80E by Sikorsky. Its third engine makes it more powerful than the Sea Stallion, which it has replaced in the heavy-lift mission.

The Sea Stallion has a fuselage design similar to the Sikorsky S-61R/Jolly Green Giant series. It has a passenger door on the right side of the fuselage behind the cockpit and a power-operated rear loading ramp. The fuselage was watertight, though not intended for amphibious use, and only landed on water in emergencies. The Stallion has mechanical flight controls which are backed by three independent hydraulic systems. Armor protects crew and vital systems. The CH-53A carries a crew of four; pilot, copilot, crew chief, and an aerial observer, a load of 38 troops, 24 litters with medical attendants, an internal cargo load of 8,000 pounds (3,600 kg) or an external load of 13,000 pounds (5,900 kg) on the single-point sling hook. The CH-53A is equipped with a pair of 7.62 mm M60 machine guns that point out to each side of the fuselage.

Later production CH-53Ds featured a Blade Inspection Method (BIM) scheme to detect cracks in its metal rotors. BIM involved pressurizing the interior of the rotor blades with nitrogen. If a crack is present pressure is lost and a red indicator on the rotor blade tip was tripped. Later, the BIM system was connected to a cockpit display. BIM reduced the need to swap out rotor blades on a routine basis. A German Army door gunner on board a CH-53