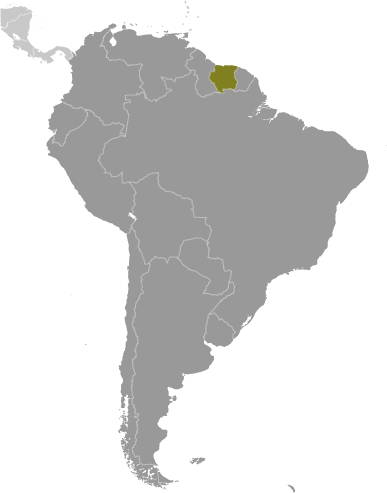 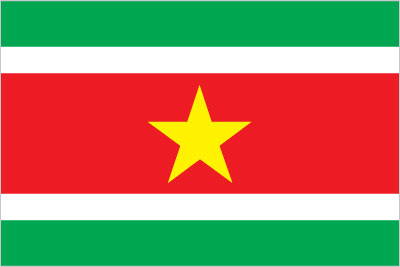 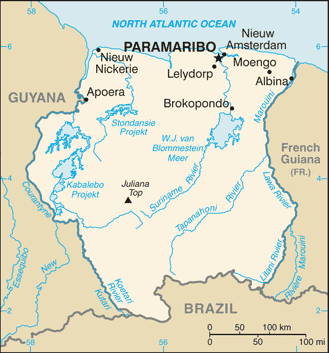 18 is the legal minimum age for voluntary military service; no conscription; personnel drawn almost exclusively from the Creole community (2012)

country comparison to the world: 117

area claimed by French Guiana between Riviere Litani and Riviere Marouini (both headwaters of the Lawa); Suriname claims a triangle of land between the New and Kutari/Koetari rivers in a historic dispute over the headwaters of the Courantyne; Guyana seeks United Nations Convention on the Law of the Sea arbitration to resolve the longstanding dispute with Suriname over the axis of the territorial sea boundary in potentially oil-rich waters

current situation: Suriname is a source, destination, and transit country for women, men, and children who are subjected to sex trafficking and forced labor; women and girls from Suriname, Guyana, Brazil, and the Dominican Republic are subjected to sex trafficking in the country, sometimes around mining camps; debt bondage and sex trafficking are reported to occur within the Chinese migrant community; migrant workers in agriculture and on fishing boats and children working in informal urban sectors and gold mines are vulnerable to forced labor

tier rating: Tier 2 Watch List - Suriname does not fully comply with the minimum standards for the elimination of trafficking; however, it is making significant efforts to do so; the government has prosecuted an increased number of sex trafficking cases and identified an increased number of child sex trafficking victims; accountability for trafficking offenses continues to be a problem as no offenders have been convicted and the complicity of local officials remains a concern; authorities do not have a formal system for referring victims to NGOs that provide services but reported doing so on an ad hoc basis; the government's interagency anti-trafficking working group drafted an anti-trafficking policy in 2012 (2013)