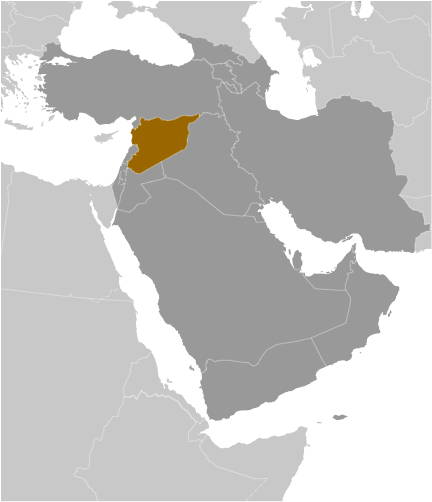 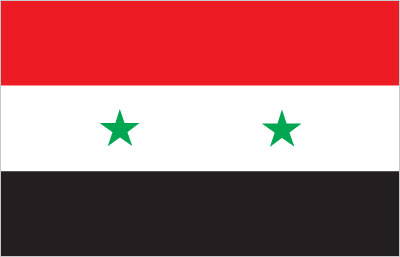 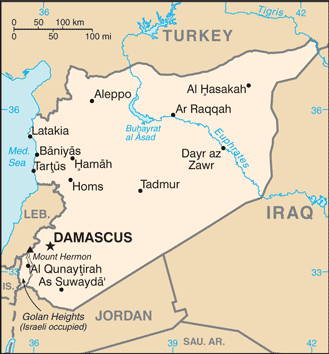 18 years of age for compulsory and voluntary military service; conscript service obligation is 18 months; women are not conscripted but may volunteer to serve; re-enlistment obligation 5 years, with retirement after 15 years or age 40 (enlisted) or 20 years or age 45 (NCOs) (2012)

country comparison to the world: 31

Golan Heights is Israeli-occupied with the almost 1,000-strong UN Disengagement Observer Force patrolling a buffer zone since 1964; lacking a treaty or other documentation describing the boundary, portions of the Lebanon-Syria boundary are unclear with several sections in dispute; since 2000, Lebanon has claimed Shab'a Farms in the Golan Heights; 2004 Agreement and pending demarcation settles border dispute with Jordan

stateless persons: 221,000 (2012); note - Syria's stateless population is composed of Kurds and Palestinians; stateless persons are prevented from voting, owning land, holding certain jobs, receiving food subsidies or public healthcare, enrolling in public schools, or being legally married to Syrian citizens; in 1962, some 120,000 Syrian Kurds were stripped of their Syrian citizenship, rendering them and their descendants stateless; in 2011, the Syrian Government granted citizenship to thousands of Syrian Kurds as a means of appeasement; however, resolving the question of statelessness is not a priority given Syria's ongoing civil war

current situation: due to Syria's political uprising and violent unrest, hundreds of thousands of Syrians, foreign migrant workers, and refugees have fled the country and are vulnerable to human trafficking; the lack of security and inaccessibility of the majority of the country makes it impossible to conduct a thorough analysis of the ongoing conflict and the scope and magnitude of Syria's human trafficking situation; prior to the uprising, Syria was principally a destination country for women and children subjected to forced labor or sex trafficking; thousands of women - the majority from Indonesia, the Philippines, Somalia, and Ethiopia - were recruited to work as domestic servants but were subsequently subjected to forced labor; Filipina domestic workers continue to be sent to Syria and are vulnerable to forced labor; the Syrian armed forces and opposition forces are using Syrian children in combat and support roles and as human shields; Iraqi women and girls continue to be sexually exploited, and Syrian children still face conditions of forced labor

a transit point for opiates, hashish, and cocaine bound for regional and Western markets; weak anti-money-laundering controls and bank privatization may leave it vulnerable to money laundering