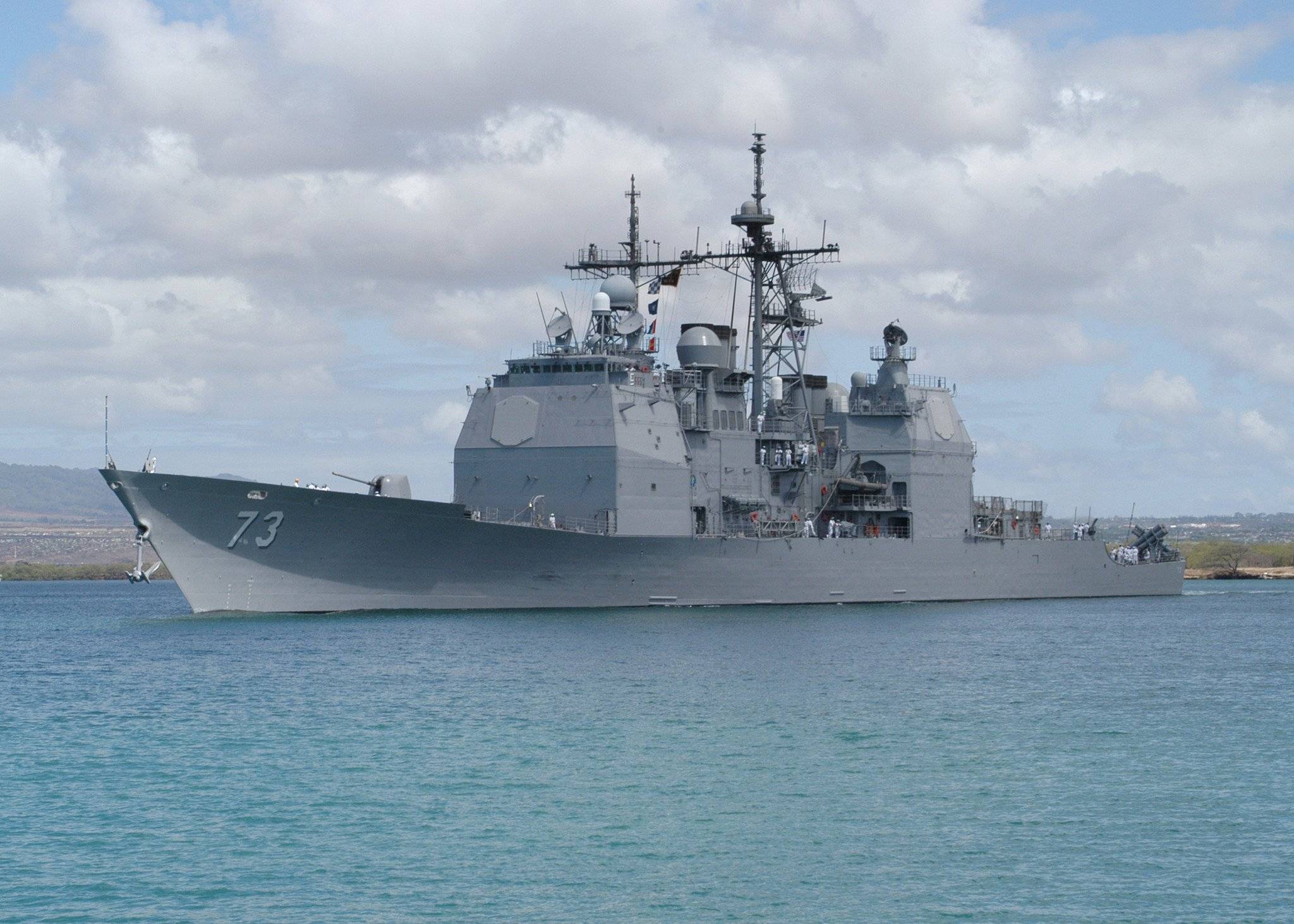 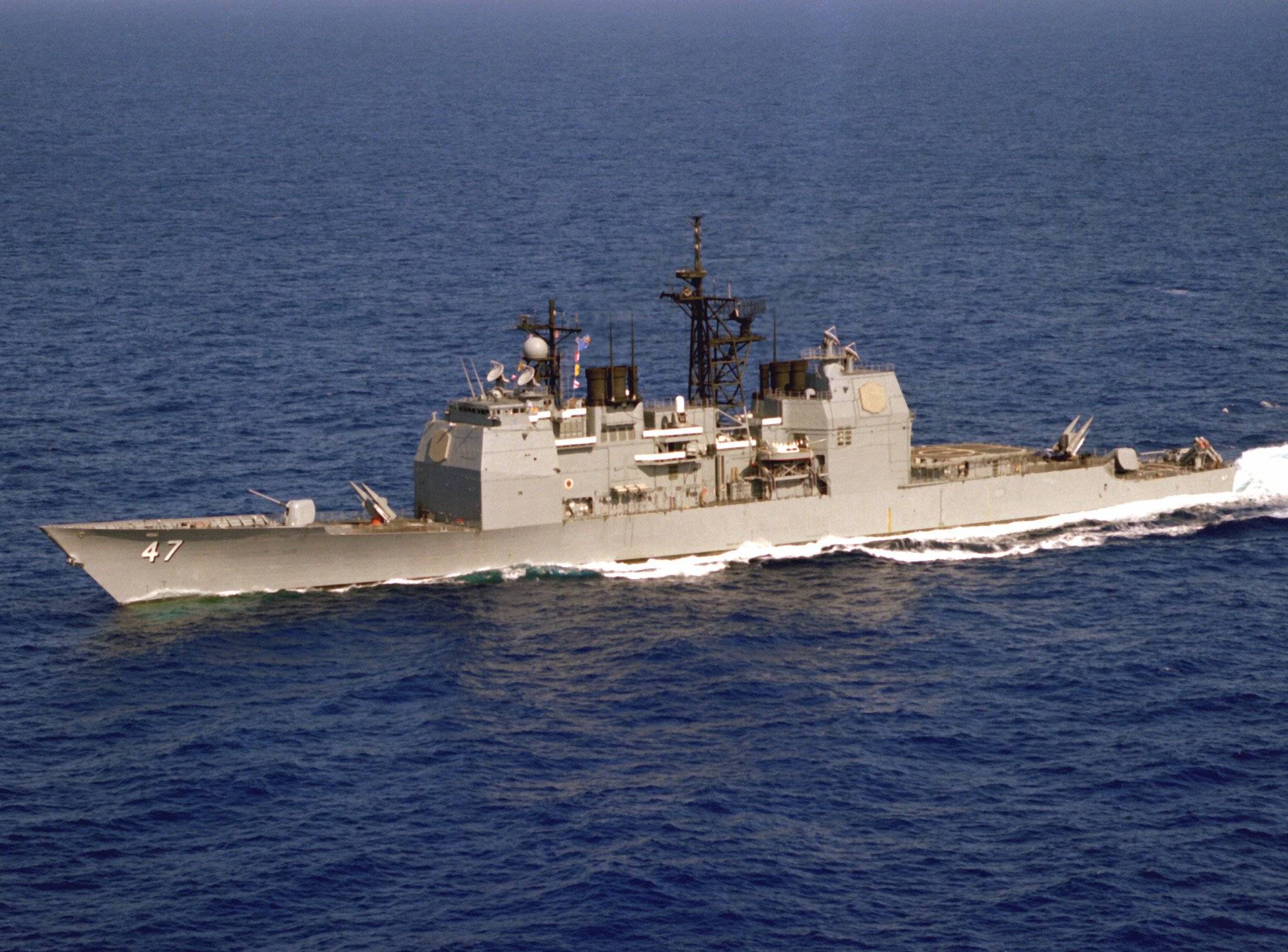 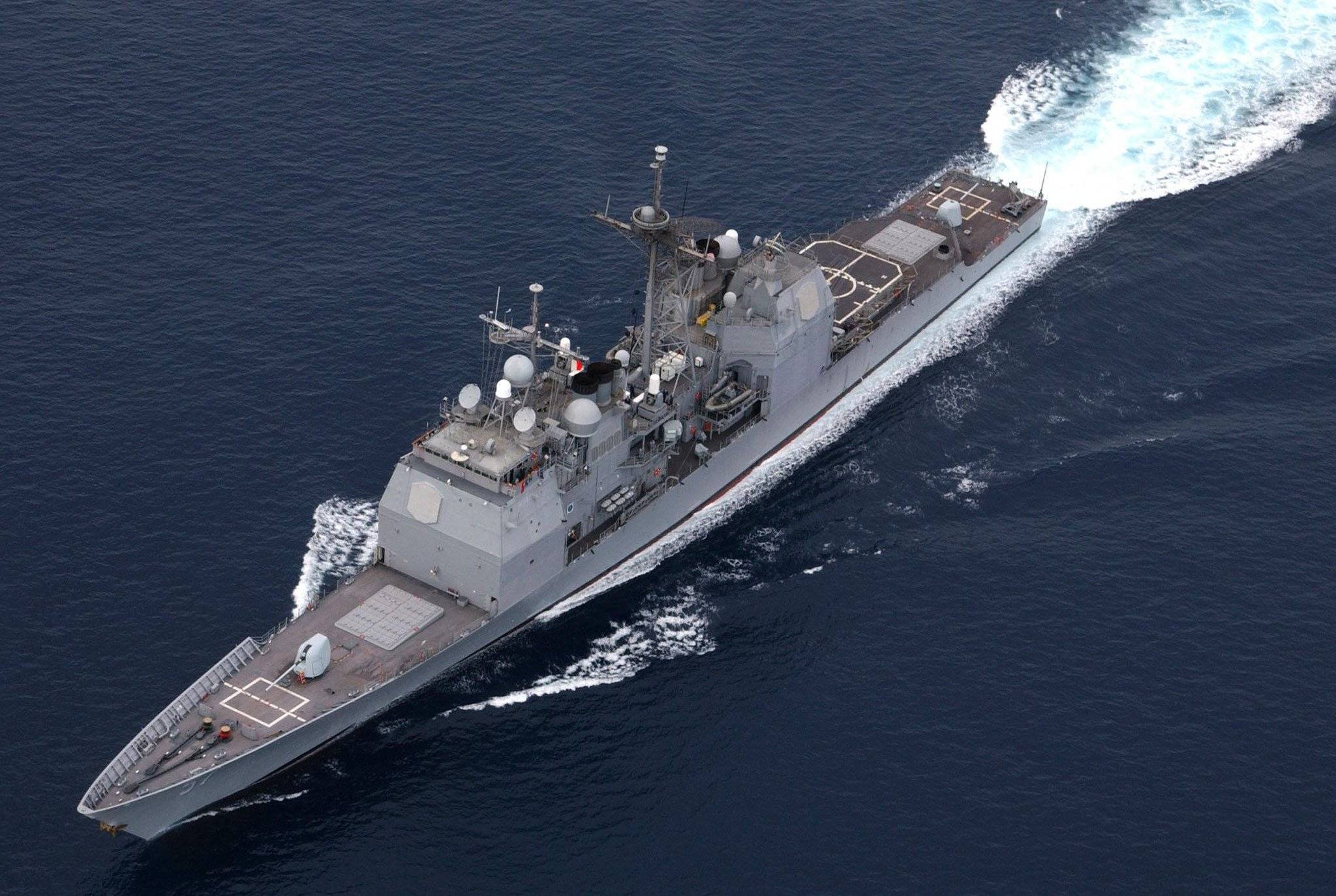 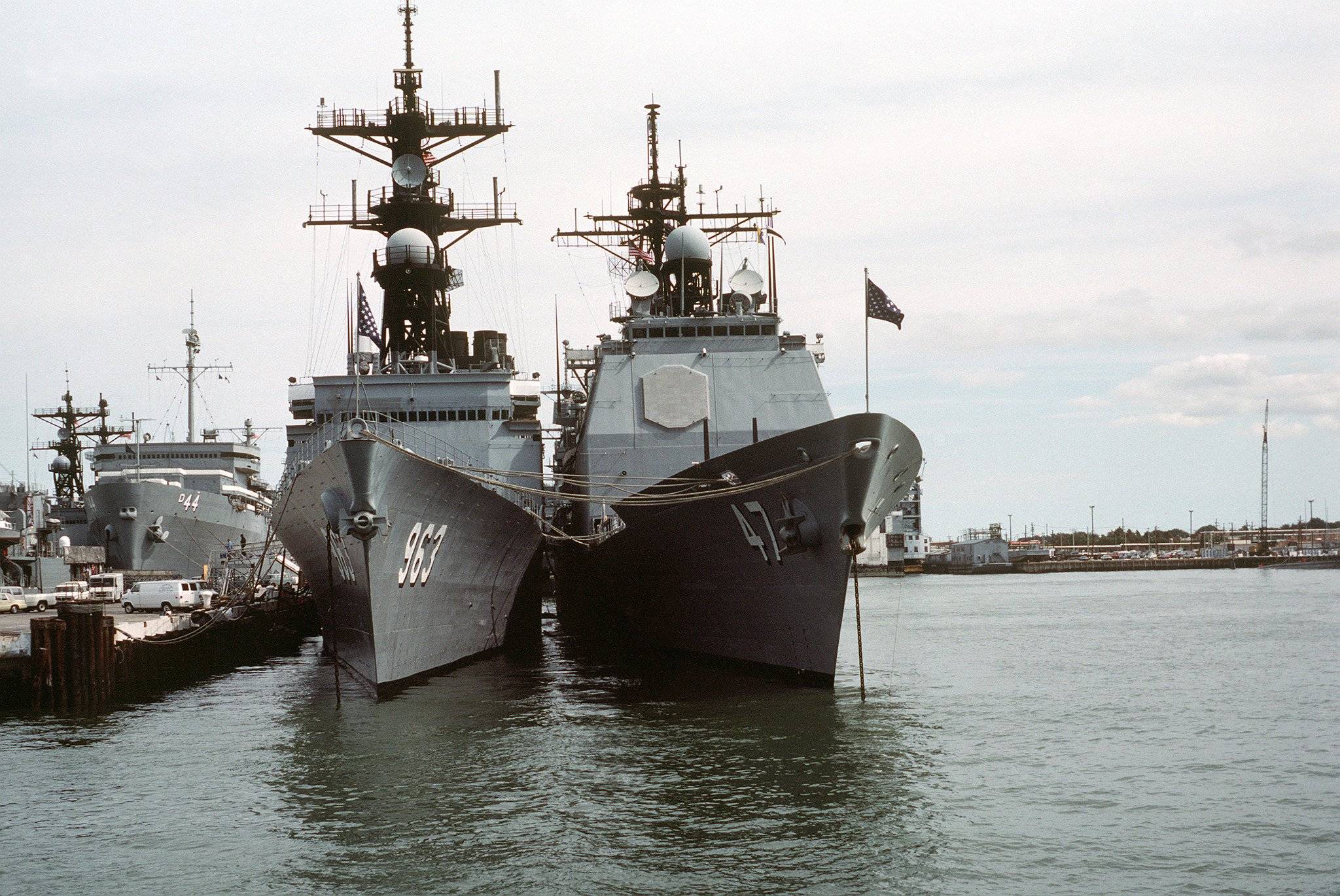 The Ticonderoga-class of guided-missile cruisers is a class of warships in the United States Navy, first ordered and authorized in the 1978 fiscal year. The class uses phased-array radar and was originally planned as a class of destroyers. However, the increased combat capability offered by the Aegis combat system and the AN/SPY-1 radar system was used to justify the change of the classification from DDG (guided missile destroyer) to CG (guided-missile cruiser) shortly before the keels were laid down for the Ticonderoga and the Yorktown.

Ticonderoga-class guided-missile cruisers are multirole warships. Their Mk. 41 VLS can launch Tomahawk cruise missiles to strike strategic or tactical targets, or fire long-range antiaircraft Standard Missiles for defense against aircraft or antiship missiles. Their LAMPS III helicopters and sonar systems allow them to perform antisubmarine missions. Ticonderoga-class ships are designed to be elements of carrier battle groups, amphibious assault groups, as well as performing missions such as interdiction or escort.

Of the 27 completed vessels, 19 were built by Ingalls Shipbuilding and eight by Bath Iron Works (BIW). All but one (Thomas S. Gates) of the ships in the class are named for noteworthy events in U.S. military history, and at least twelve; Ticonderoga, Cowpens, Anzio,Yorktown, Valley Forge, Bunker Hill, Antietam, San Jacinto, Lake Champlain, Philippine Sea, Princeton, Monterey, and Vella Gulf; share their names with World War II aircraft carriers.

Ticonderoga–class cruisers were built on the same hull as the Spruance-class destroyer.

The Ticonderoga-class cruiser's design was based on that of the Spruance-class destroyer. The Ticonderoga–class introduced a new generation of guided missile warships based on the AEGIS phased array radar that is capable of simultaneously scanning for threats, tracking targets, and guiding missiles to interception. When they were designed, they had the most powerful electronic warfare equipment in the U.S. Navy, as well as the most advanced underwater surveillance system. These ships were one of the first classes of warships to be built in modules, rather than being assembled from the bottom up.

Operations research was used to study manpower requirements on the Ticonderoga class. It was found that four officers and 44 enlisted sailors could be removed from the ship's complement by removing traditional posts that had been made obsolete.

An overhead view of theTiconderoga-class USS Lake Champlain (CG-57), with VLS visible fore and aft as the gray boxes near the bow and stern of the ship.

In addition to the added radar capability, the Ticonderoga-class ships subsequently built after the USSThomas S. Gates included two Mark 41 Vertical Launching Systems (VLS). The two VLS allow the ship to have 122 missile storage and launching tubes that can carry a wide variety of missiles, including the Tomahawk cruise missile, Standard surface-to-air missile, Evolved Sea Sparrow surface-to-air missile, and ASROC antisubmarine warfare (ASW) guided rockets. More importantly, the VLS enables all missiles to be on full stand-by at any given time, shortening the warship's response time before firing. The original five ships (Ticonderoga, Yorktown, Vincennes, Valley Forge, and Thomas S. Gates) had Mark 26 twin-arm launchers that limited their missile capacity to a total of 88 missiles, and that could not fire the Tomahawk missile. After the end of the Cold War, the lower capabilities of the original five warships limited them to duties close to the home waters of the United States. These ship's cluttered superstructure, inherited from the Spruance-class destroyers, required two of their external radar units to be mounted on a special pallet on the portside aft corner of the superstructure, with the other two mounted on the forward starboard corner. The later AEGIS warships, designed from-the-keel-up to carry the SPY-1 radars, have them all clustered together.

The high weight of these warships - about 1,500 tons heavier than the Spruance-class, resulted in a highly-stressed hull and some structural problems in early service, which were generally corrected in the late 1980s and mid-1990s. Several ships had superstructure cracks which had to be repaired.

Originally, the U.S. Navy had intended to replace its fleet of Ticonderoga-class guided-missile cruisers with cruisers produced as part of the CG(X) missile cruiser program; however, severe budget cuts from the 21st century surface combatant program coupled with the increasing cost of the Zumwalt-class guided missile destroyer program resulted in the CG(X) program being canceled. The Ticonderoga-class cruisers will instead be replaced by Flight III Arleigh Burke-class guided-missile destroyers.

All five of the twin-arm (Mk-26) cruisers have been decommissioned. In 2003, the newer 22 of the 27 ships (CG-52 to CG-73) in the class were upgraded to keep them combat-relevant, giving the ships a service life of 35 years each. In the years leading up to their decommissioning, the five twin-arm ships had been assigned primarily home-waters duties, acting as command ships for destroyer squadrons assigned to the eastern Pacific and western Atlantic areas.

As of July 2013, 12 cruisers have completed hull, mechanical, and electrical (HM&E) upgrades. 8 cruisers have had combat systems upgrades. These include an upgrade of the AEGIS computing infrastructure with the SPQ-9B radar system, incorporating computing technology, fiber optics, and software upgrades, and modifications to the vertical launch system to fire the RIM-162 ESSM. Another upgrade is improving the SQQ-89A(V)15 sonar with a multi-function towed array. Hull, sonar, radar, electrical, computer, and weapons systems upgrades can cost up to $250 million per ship.