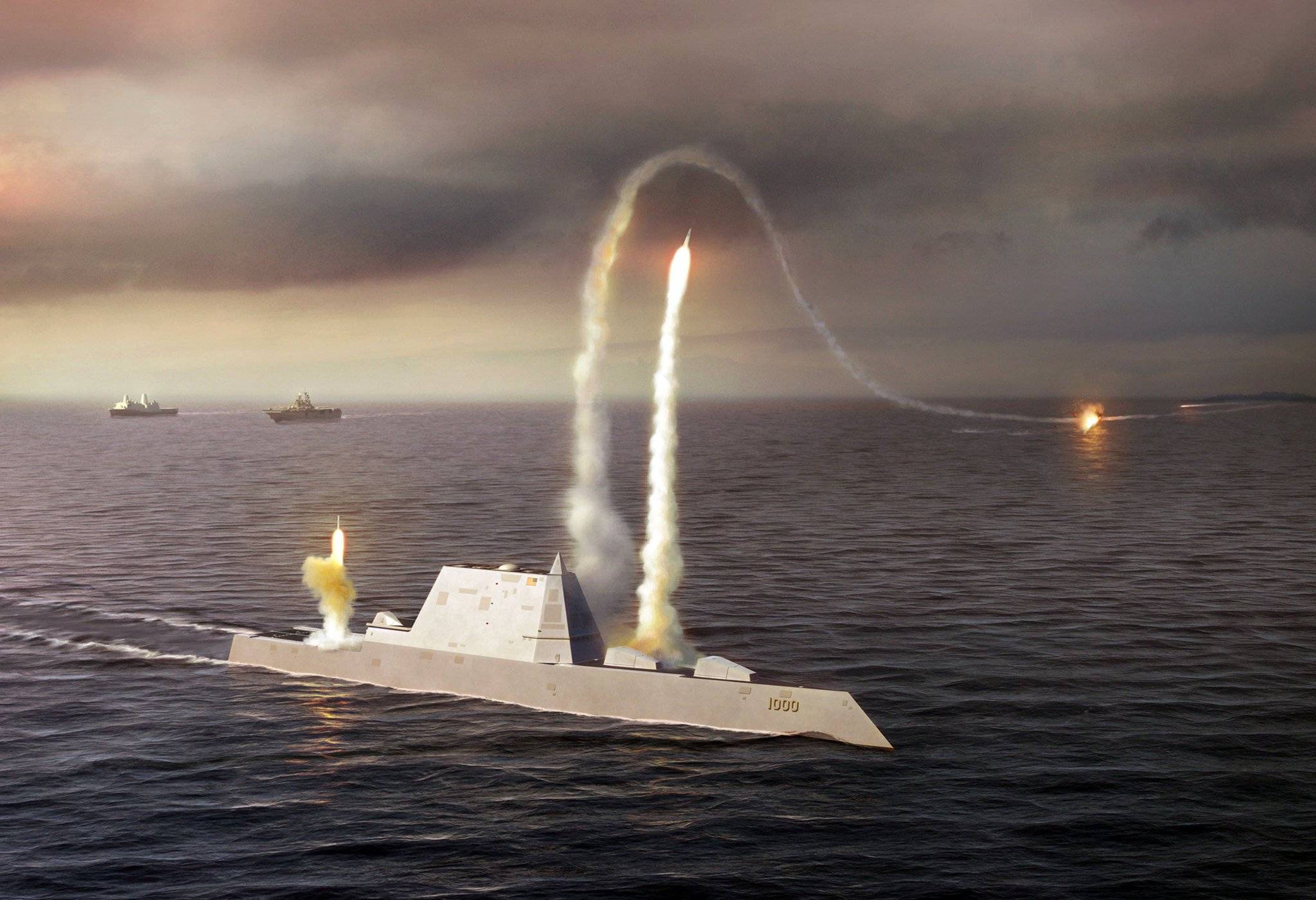 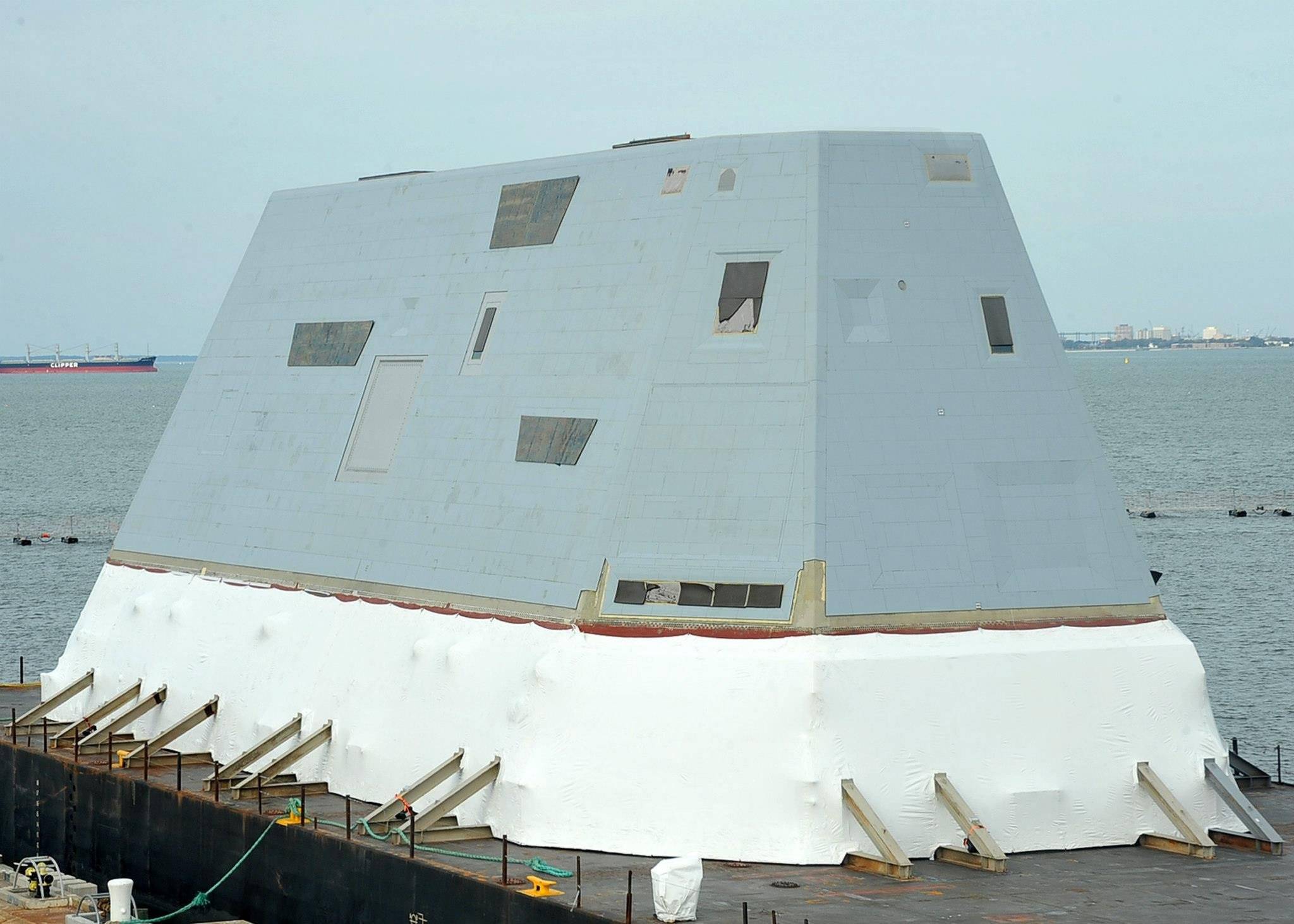 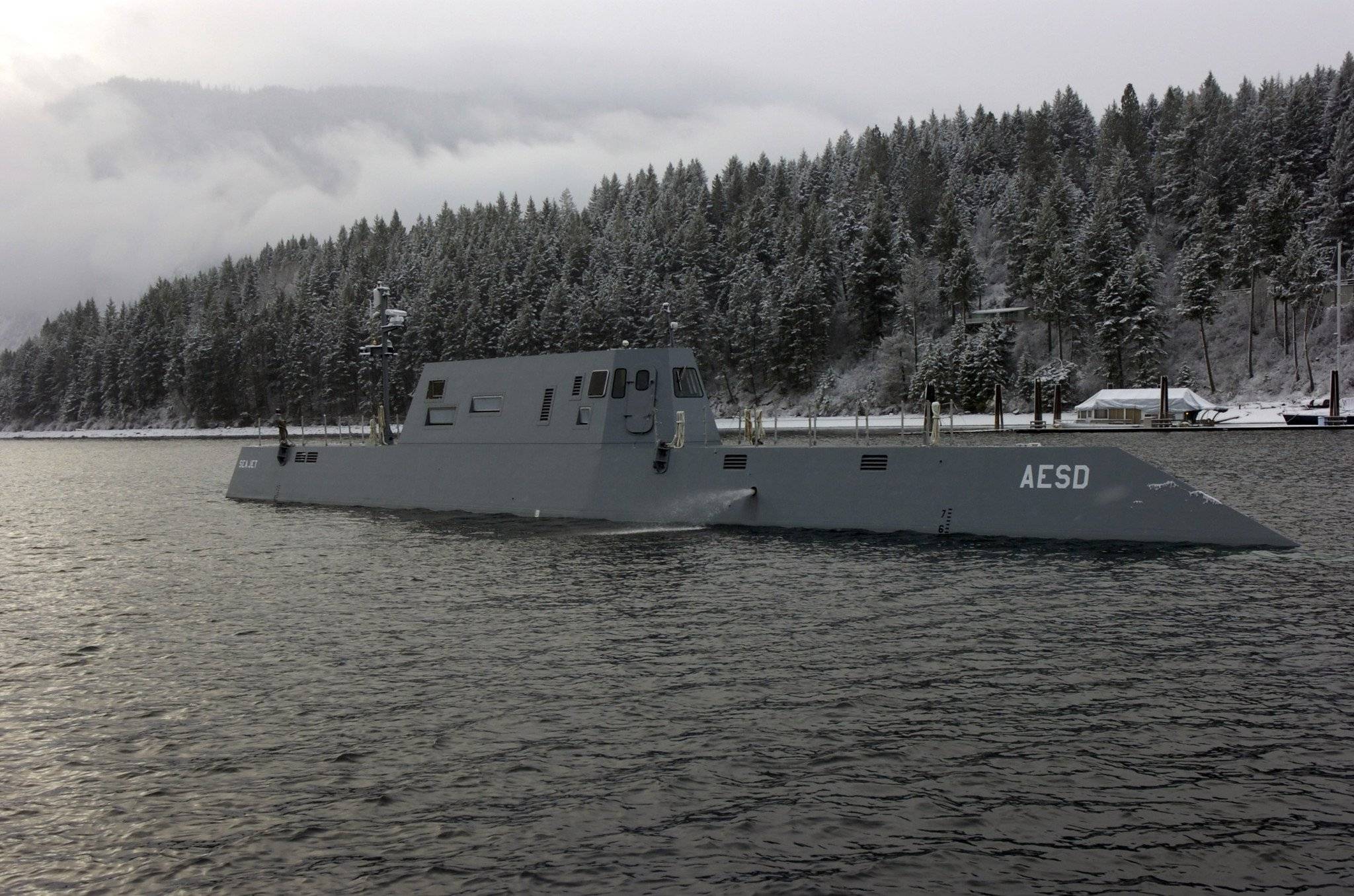 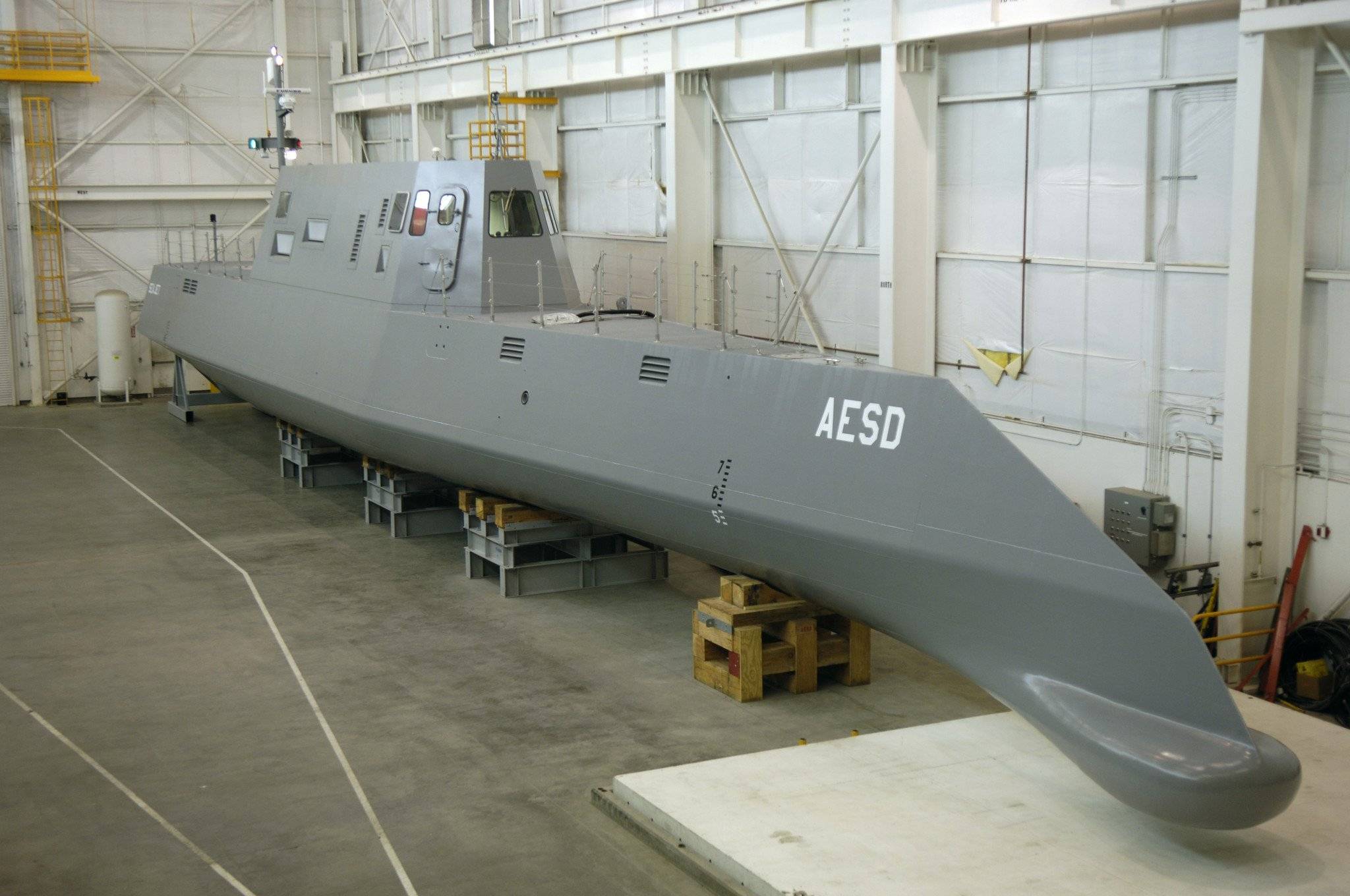 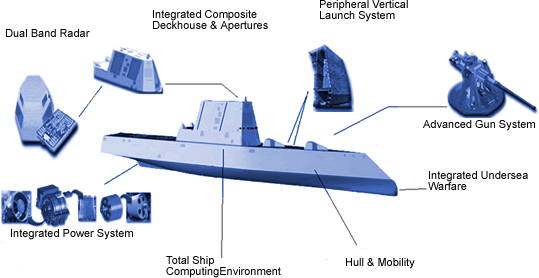 The Zumwalt-class destroyers are a planned class of United States Navy destroyers, designed as multi-mission ships with a focus on land attack. The class is a scaled-back project that emerged after funding cuts to the larger DD-21 vessel program. The program was previously known as the "DD(X)". The class is multi-role and designed for surface warfare, anti-aircraft, and naval fire support. They take the place of battleships in filling the former congressional mandate for naval fire support, though the requirement was reduced to allow them to fill this role. The vessels' appearance has been compared to that of the historic ironclad warship.

The class has a low radar profile; an integrated power system, which can send electricity to the electric drive motors or weapons, which may some day include a railgun or free-electron lasers; total ship computing environment infrastructure, serving as the ship's primary LAN and as the hardware-independent platform for all of the ship's software ensembles; automated fire-fighting systems and automated piping rupture isolation. The class is designed to require a smaller crew and be less expensive to operate than comparable warships. It will have a wave-piercing tumblehome hull form whose sides slope inward above the waterline. This will reduce the radar cross-section, returning much less energy than a more hard-angled hull form. As of January 2009, the Government Accountability Office(GAO) found that only four out of 12 of the critical technologies were mature.

The lead ship will be named Zumwalt for Admiral Elmo Zumwalt, and carries the hull number DDG-1000. Originally 32 ships were planned, with the $9.6 billion research and development costs spread across the class, but as the quantity was reduced to 10, then 3, the cost-per-ship increased dramatically. The cost increase caused the U.S. Navy to identify the program as being in breach of the Nunn–McCurdy Amendment on 1 February 2010.

Planned features of the DDG-1000

Despite being 40% larger than an Arleigh Burke-class destroyer the radar signature is more akin to a fishing boat and sound levels are compared to the Los Angeles-class submarines. The tumblehome hull reduces radar return and the composite material deckhouse also has a low radar return. Water sleeting along the sides, along with passive cool air induction in the mack reduces thermal emissions. In January 2013, the Navy solicited bids for a steel deckhouse as an option for DDG-1002.

A return to a hull form not seen since the Russo-Japanese War in 1905, the Zumwalt-class destroyer reintroduces the tumblehome hull form. Originally put forth in modern steel battleship designs by the French shipyard Forges et Chantiers de la Mediterranee in La Seyne in Toulon, French naval architects believed that tumblehome, in which the beam of the vessel narrowed from the water-line to the upper deck, would create better freeboard, greater seaworthiness, and, as Russian battleships were to find, would be ideal for navigating through narrow constraints (canals). On the down side, the tumblehome battleships experienced stability problems, especially in high speed turns or losses in watertight integrity. 21st century tumblehome is being reintroduced to reduce the radar return of the hull. The bow is designed to cut through waves rather than ride over them. As mentioned above, the stability of this hull form in high sea states has caused debate among naval architects. The tumblehome has not featured in USN concept designs since the Zumwalt class.

There has been research on extending the range of naval gunfire for many years. Canadian engineer Gerald Bull and Naval Ordnance Station Indian Head tested an 11 inch sub-caliber saboted long-range round in a stretched 16-inch/45 Mark 6 battleship gun in 1967. The Advanced Gun Weapon System Technology Program (AGWSTP) evaluated a similar projectile with longer range in the 1980s. After the battleships were decommissioned in 1992, the AGWSTP became a 5-inch gun with an intended range of 180 kilometers (110 mi), which then led to the Vertical Gun for Advanced Ships (VGAS). The original DD-21 was designed around this "vertical gun", but the project ran into serious technology/cost problems and was radically scaled back to a more conventional 6.1 inch Advanced Gun System (AGS). One advantage of this move was that the gun was no longer restricted to guided munitions.

The Advanced Gun System is a 155 mm naval gun, two of which would be installed in each ship. This system consists of an advanced 155 mm gun and the Long Range Land Attack Projectile. This projectile is in fact a rocket with a warhead fired from the AGS gun; the warhead weighs 11 kg / 24 lb and has a circular error of probability of 50 meters. This weapon system will have a range of 83 nautical miles (154 km) and the fully automated storage system will have room for up to 750 rounds. The barrel is water-cooled to prevent overheating and allows a rate of fire of 10 rounds per minute per gun. The combined firepower from a pair of turrets gives each Zumwalt-class destroyer firepower equivalent to 12 conventional M198 field guns.

In order to provide sufficient stability to fire these guns, the Zumwalt will use ballast tanks to lower itself into the water.

The Peripheral Vertical Launch System is an attempt to reclaim the prized center space of the hull while increasing the safety of the ship from the loss of the entire missile battery and the loss of the ship in the case of a magazine explosion. The system scatters pods of VLS around the outer shell of the ship having a thin steel outer shell and a thick inner shell. The design of the PVLS would direct the force of the explosion outward rather than ripping the ship in half. Additionally this design keeps the loss of missile capacity down to just the pod being hit.

Two spots will be available on a large aviation deck while boat handling is to be dealt within a stern mounted boat hangar with ramp. The boat hangar’s stern location meets high sea state requirements for boat operations.

Originally, the AN/SPY-3 Active Electronically Scanned Array primarily X-band radar (high altitude near airspace) was to be married with Lockheed Martin's SPY-4 S-band volume search radar. Raytheon’s X-band, active-array SPY-3 Multi-Function Radar (MFR) offers superior medium to high altitude performance over other radar bands, and its pencil beams give it an excellent ability to focus in on targets. SPY-3 will be the primary DBR radar used for missile engagements. On 2 June 2010 Pentagon acquisition chief Ashton Carter announced that they will be removing the SPY-4 S-band Volume Search Radar from the DDG 1000's dual-band radar. The new radar is believed to be the Air Missile Defense Radar (AMDR), a system in early development. The AMDR will provide multi-mission capabilities, supporting both long range, exoatmospheric detection, tracking and discrimination of ballistic missiles, as well as Area and Self Defense against air and surface threats. For the Ballistic Missile Detection capability, increased radar sensitivity and bandwidth over the current SPY system is needed to detect, track and support the SPY-3's engagements of advanced ballistic missile threats at the required ranges. For the Area Air Defense and Self Defense capability, increased sensitivity and clutter rejection capability is needed to detect, react to, and engage stressing Very Low Observable / Very Low Flyer (VLO/VLF) threats in the presence of heavy land, sea, and rain clutter. Each band will have its own signal processors, with the returns combined by the display sensor manager. This system is thought to provide high detection and excellent anti-jamming capabilities. But at least one report by Congress' investigative arm, the GAO, raises concerns that it is too much of a technology leap.

A dual-band sonar controlled by a highly automated computer system will be used to detect mines and submarines. It is claimed that it is superior to the Burke's sonar in littoral ASW, but less effective in blue water/deep sea areas.

The DDX proposed to use a Permanent Magnet Motor (PMM) within the hull. An alternate twin pod arrangement was rejected as the ramifications of pod drives would require too much development and validation cost to the vessel. The PMM is considered to be another technology leap and is the cause of some concern (along with the radar system) from Congress. As part of the design phase, Northrop Grumman had built the world's largest permanent magnet motor, designed and fabricated by DRS Technologies. This proposal was dropped when the PMM motor failed to demonstrate that it was ready to be installed in time.

"...The exact choice of engine systems remains somewhat controversial at this point. The concept was originally for an integrated power system (IPS) based on in-hull permanent magnet synchronous motors (PMMs), with Advanced Induction Motors (AIM) as a possible backup solution. The design was shifted to the AIM system in February 2005 in order to meet scheduled milestones; PMM technical issues were subsequently fixed, but the program has moved on. The downside is that AIM technology has a heavier motor, requires more space, requires a "separate controller" to be developed to meet noise requirements, and produces one-third the amount of voltage. On the other hand, these very differences will force time and cost penalties from design and construction changes if the program wishes to "design AIM out"..."

The Integrated Power System (IPS) is, in some ways, similar to the old turbo-electric drive, the addition of PMMs and integration of all electrical power systems gives ten times the power available on current destroyers. It also reduces the ship's thermal and sound signature. The IPS has added to weight growth in the Zumwalt-class destroyer as noted by the GAO.

Automation will reduce crew size on these ships. A smaller crew will reduce a major component of operating costs. Ammunition, food, and other stores, are all mounted in containers able to be struck below to magazine/storage areas by an automated cargo handling system.

Water spray or mist systems are proposed for deployment in the Zumwalt-class destroyer but the electronic spaces remains problematic to the designers. Halon/Nitrogen dump systems are preferred but do not work when the space has been compromised by a hull breach. The GAO has noted this system as a potential problem yet to be addressed.

In April 2006, the navy announced plans to name the first ship of the class Zumwalt after former Chief of Naval Operations Admiral Elmo R. "Bud" Zumwalt Jr. Its hull number will be DDG-1000, which abandons the guided missile destroyer sequence used by the Arleigh Burke-class destroyers (DDG-51– ), and continues the previous "gun destroyer" sequence from the last of Spruance-class, USS Hayler (DD-997).

DDG-1001 will be named for Master-at-Arms 2nd Class (SEAL) Michael A. Monsoor, the second SEAL to receive the Medal of Honor in the Global War on Terror (GWOT), the navy announced on 29 October 2008.

On 16 April 2012, the Secretary of the Navy Ray Mabus announced that DDG-1002 will be named for former naval officer and U.S. President, Lyndon B. Johnson.

There is an active civilian campaign to persuade the Secretary of the Navy to name one of the class the USS Robert A. Heinlein.